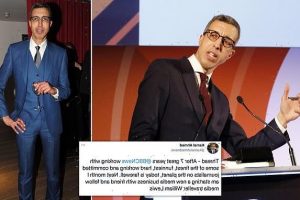 Kamal Ahmed has left the BBC to begin a ‘new media business’ with ITN just weeks after he was axed from his £205,000 editorial director role.

The BBC axed Mr Ahmed and two others from its news board in February in a ‘modernisation’ plan – leaving it with no ethnic minority members despite a pledge to increase senior management diversity last year.

The former Observer executive news editor today confirmed he will part ways will the broadcaster after seven years and launch a new venture with media executive William Lewis.

He said: ‘After seven great years @BBCNews working with some of the finest, funniest, hard working and committed journalists on the planet, today is farewell.

‘Next month I am starting a new media business with friend and fellow media traveller William Lewis.

‘We know audiences are changing the way they consume “news” and @TheNewsMovement will focus on trusted, objected (sic) information on social media and other digital channels.’ 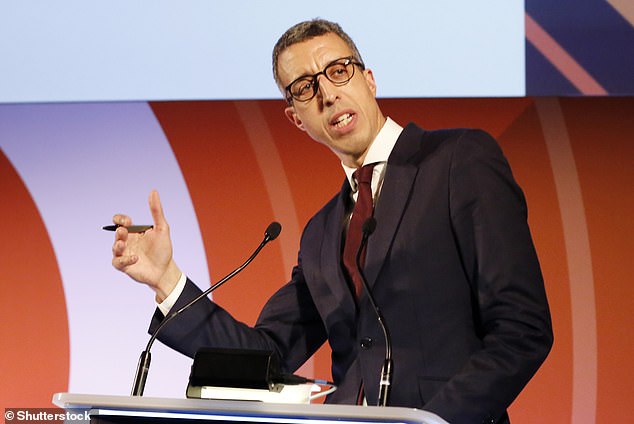 Kamal Ahmed (above) has left the BBC to begin a ‘new media business’ with ITN just weeks after he was axed from his £205,000 editorial director role 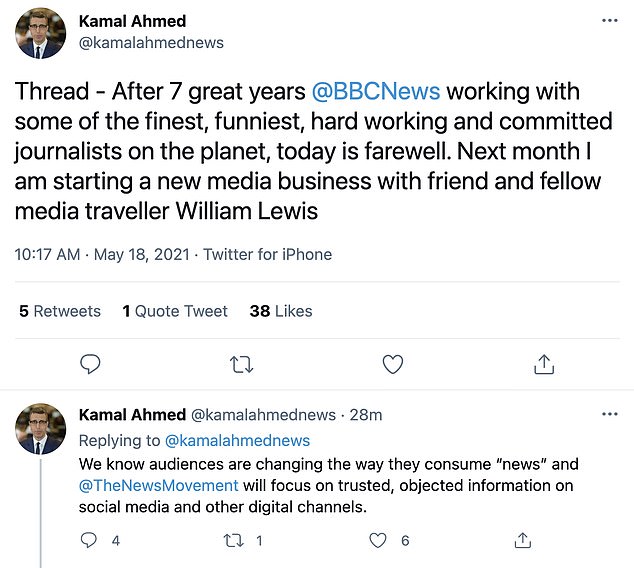 He added: ‘Finally – a thank you to @BBCNews.

‘You are amazing, a privilege to work for and one of the most remarkable and important news organisations in the world.

The slimmed-down BBC news board will remain headed by director of news and current affairs Ms Unsworth, who earns £340,000-a-year, a source said.

There were also claims of hypocrisy because at the time he was involved in an internal review of rules on BBC staff taking speaking engagements for cash, and he was forced to apologise in an email to colleagues, before refusing to accept the cash.

A BBC insider told MailOnline: ‘No one working here was very surprised. Most people think he had it coming. 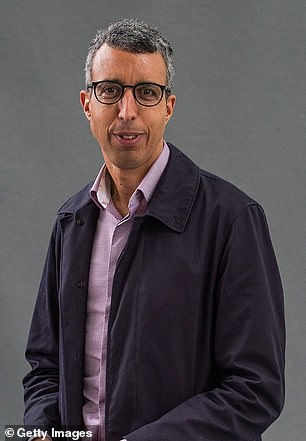 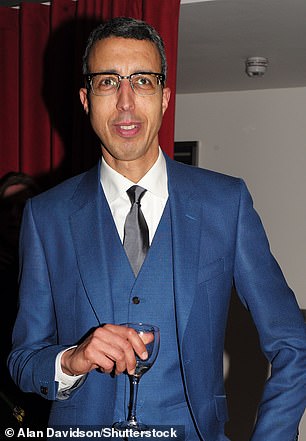 Following news of his departure today, the BBC responded on Twitter: ‘Goodbye and good luck Kamal!’

‘Kamal had gone to Tony Hall [Previous director-general] arguing that we needed this editorial director role, and Tony created it for him. But most people think it was a non-job. He and Fran [Unsworth] did not get on.

From broadsheet to broadcast: The rise of Kamal Ahmed

Kamal Ahmed is a former newspaper man who started his career in Scotland during the nineties.

He moved to the Guardian and was appointed executive news editor at the Observer.

Ahmed briefly left journalism to become the Director of Communications at the Equality and Human Rights Commission but returned to reporting as business editor of the Sunday Telegraph in 2009.

He replaced Robert Peston as the business editor of BBC News in March 2014 and the next year took his role as economics editor.

Four years later he was announced as BBC News’s Editorial Director in a position created by Fran Unsworth on the News Board.

Ahmed previously hit the headlines last February when he apologised for accepting a £12,000 payment for speaking at a banker’s conference.

He received £12,000 for a 40-minute appearance at the Aberdeen Standard Investment’s conference, just days after telling 450 of his colleagues that their jobs were being cut.

He came under fire both publicly and within the BBC for his fee for the event and has sent an email to colleagues apologising.

‘People didn’t like him. They didn’t understand how he was elevated so quickly, and many didn’t forgive him for that speech to a hedge fund while lots of job losses were being announced here.’

An £80 million savings plan saw the job cuts announced by the broadcaster in February, the ‘restructuring’ as part of ‘plans to modernise BBC News’.

Two other members of the board, Gavin Allen and Jo Carr, have also lost their jobs after the restructuring.

In 2019, the corporation said all senior leadership groups should have at least two staff members from minority ethnic backgrounds.

However, Ahmed’s departure will mean that the BBC News board is now all-white.

Former newspaper man Ahmed’s role was created by Unsworth in 2018 and she said she was ‘thrilled he was joining her top team’.

However, the pair were said to have had differences of opinion over the department’s editorial direction, leading to his removal.

Reacting to the change in February, one BBC source told the Telegraph: ‘And just like that our news board is all-white again. Not the direction I and many others hoped we would be going in.’

Mr Ahmed’s latest venture, The News Movement, is a joint project with ITN and will be led by its CEO Deborah Turness. It will launch later this year.

Following news of his departure today, the BBC responded on Twitter: ‘Goodbye and good luck Kamal!’.

Journalist Mina Al-Oraibi said: ‘Congratulations! Although I will miss your insights on the BBC, I am excited to see what you will do with @TheNewsMovement.’

Ahmed, whose mother is from Rotherham and whose father is from Sudan, had a role as editorial director which included overseeing Question Time and was paid around £205,000. He joined the BBC in 2014.

He found himself challenged in February last year when Victoria Derbyshire told him to ‘reconsider the decision to close our programme’.

It came after he had shared a post about a probe by Newsnight that had resulted in the Government announcing measures to ban putting children under the age of 16 in unregulated accommodation.

Derbyshire made her feelings known about her programme’s cancellation, and has condemned the BBC’s claims that it pulled the show off air because it had failed to grow its live audience. 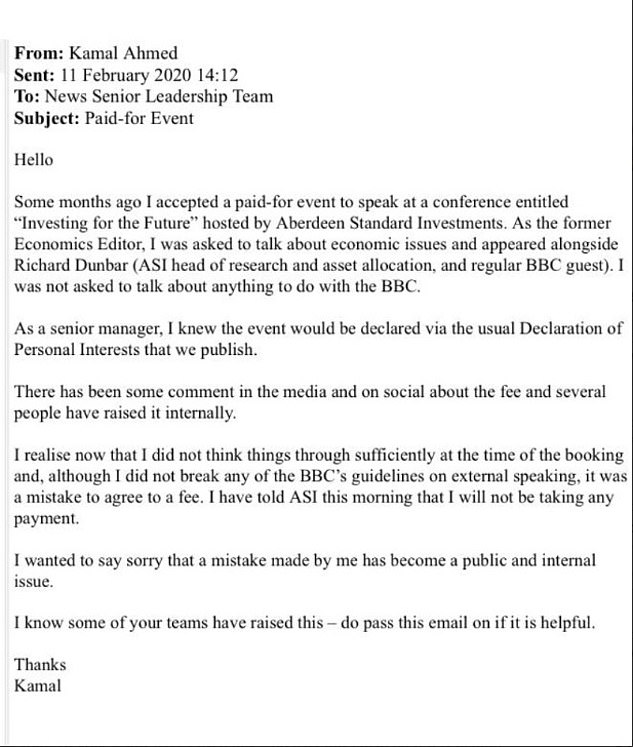 In February last year the BBC’s editorial director apologised after he pocketed £12,000 for a 40-minute appearance at the Aberdeen Standard Investment’s conference at a time when hundreds of people were laid off. He then said he would not take the cash 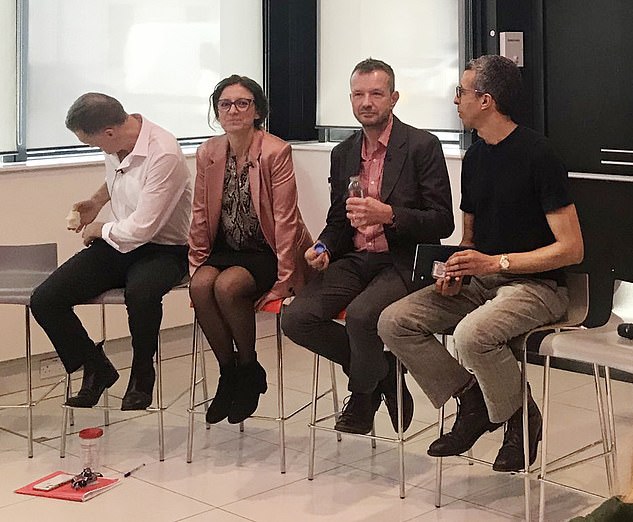 Ahmed previously hit the headlines in February 2020 when he apologised for accepting a £12,000 payment for speaking at a banker’s conference.

He received the cash for a 40-minute appearance at the Aberdeen Standard Investment’s conference, just days after telling 450 of his colleagues that their jobs were being cut.

He came under fire both publicly and within the BBC for his £12,000 fee for the event and has sent an email to colleagues apologising.

In the email, he wrote: ‘I realise now that I did not think things through sufficiently at the time of the booking and, although I did not break any of the BBC’s guidelines on external speaking, it was a mistake to agree to a fee.

‘I have told ASI this morning that I will not be taking any payment. I wanted to say sorry that a mistake made by me has become a public and internal issue.’

Days before, Ahmed was one of four senior BBC bosses who sat on bar stools as they announced the job cuts.