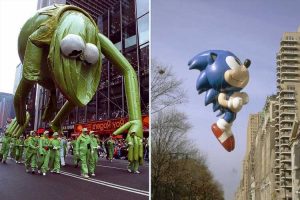 THESE are Macy's Thanksgiving Parade's most infamous balloon accidents from Sonic bursting to a cat that almost caused a plane crash.

The spectacular annual event has come a long way since it was first held onNovember 27, 1924, when it was called the Macy's Christmas Parade and was without massive floating balloons. 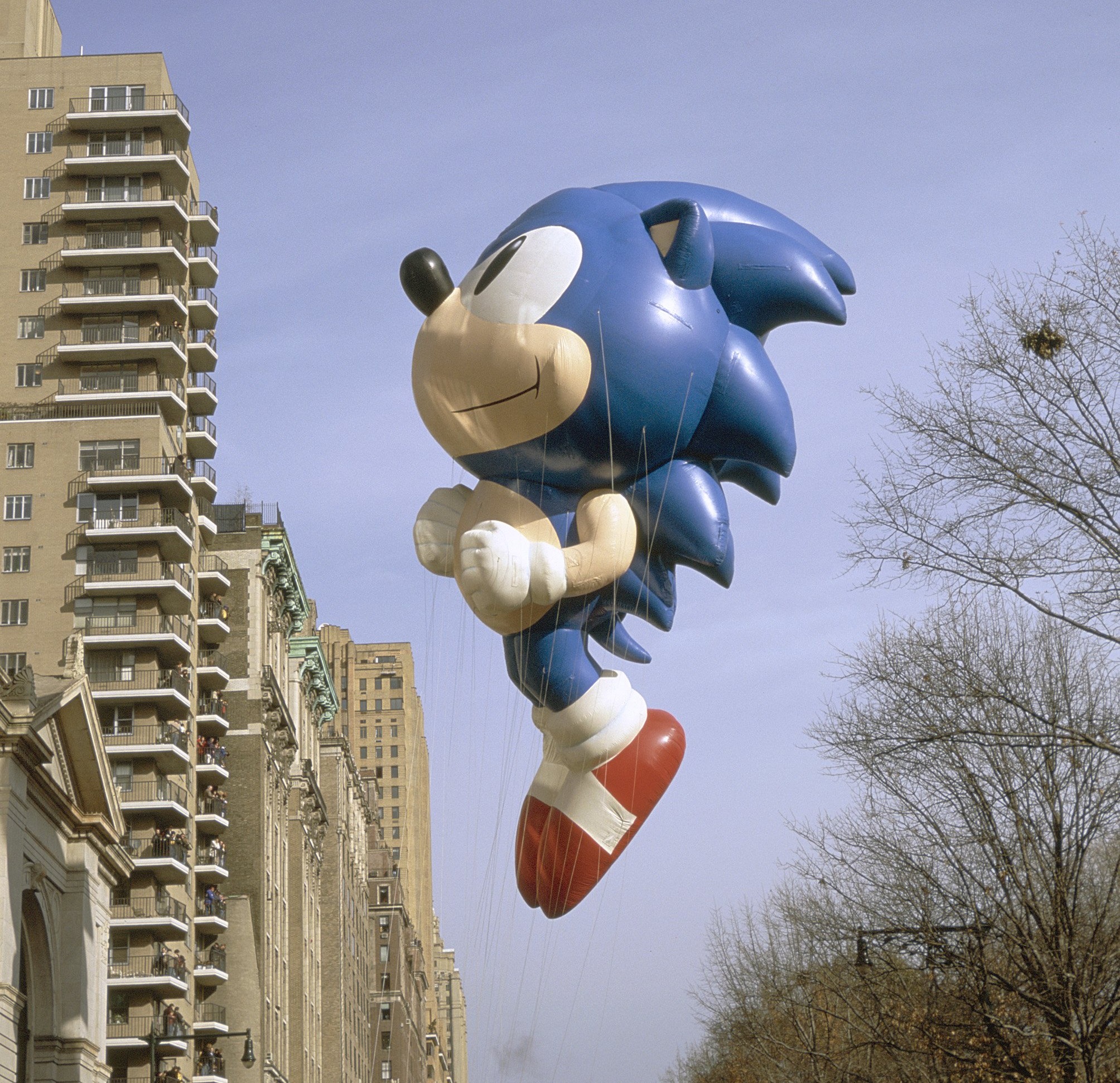 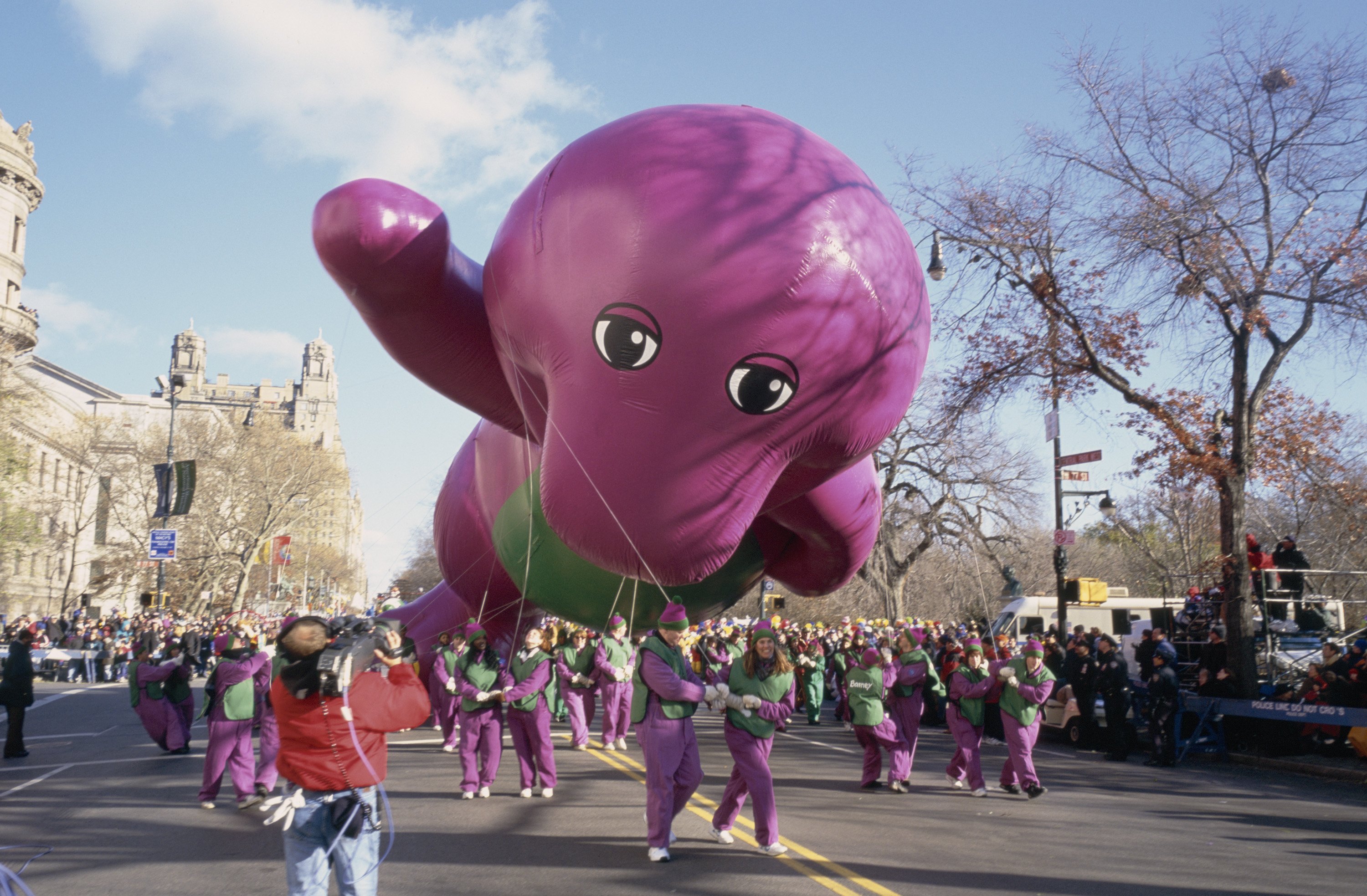 As multiple decades have passed since the first parade, here's a look back at some of the shocking mishaps that occurred over the years.

Back in 1993, the Sonic the Hedgehog balloon was plagued by strong winds, which caused the inflatable character to crash into a pole on West 58th street.

Sonic the Hedgehog wasn't strong enough for the wind speeds and got hit in the left eye with a lamp post.

The impact caused a section of the balloon to tear and a part of the streetlight to fall into the paradegoers.

Both a 10-year-old girl and an off-duty police officer were injured in the balloon mishap.

Additionally, one woman was hit with helium fumes. All three victims were treated on the scene.

According to Mike Goldenthal, who saw the incident from his apartment, the big blue hedgehog "smashed into the lamp post, broke the lamp post, and a large part of the lamp went and, it looked like it smacked this fella on the back."

The balloon was immediately deflated and didn't finish marching in the parade.

Despite, Macy's spreading the word to New York news outlets to warn pilots to keep away from the large balloons, one plane didn't steer clear of trouble.

The shocking incident happened during a time where Macy's would free the balloons into the sky at the end of the parade — something which hasn't been done since the nearly fatal event.

However, people were given rewards if they located the balloons afterward.

About 30 minutes after the balloons were released on November 24, 1932, a flying instructor and her student flew their plane into the yellow-striped Tom Kat balloon, The Hatching Cat explains.

The plane ultimately went into a tailspin after fabric from the balloon covered the aircraft's left-wing.

CAT IN THE HAT

Meanwhile, Tom Kat wasn't the only feline to cause a problem during the yearly march.

In 1997, the Cat in the Hat balloon hit a lamppost while passing an intersection at 72nd Street and Central Park West.

The unexpected impact prompted the cat's metal arm to tear off.

And the lamppost, which weighed about 100 pounds, fell and injured four people — with the worst injury being that a woman nearly died.

One of the victims, Kathy Coronna, fell into a coma which lastly for a month.

Coronna was successfully sued Macy's after the incident.

Barney the Dinosaur was also plagued during the 1997 Macy’s Thanksgiving Day Parade.

A gust of wind pushed the purple dinosaur into a lamppost —making it very difficult for the balloon handlers to maintain control over the large figure.

It took minutes for handlers to try and take control of Barney the Dinosaur.

Police officers eventually had to surround Barney the Dinosaur and stab the balloon with knives.

Spectators watched as the massive balloon deflated in front of their eyes.

Footage of the incident was shared to YouTube years later, titled: "Thanksgiving '97. The day Barney was killed."

In 1985, the Kermit the Frog's stomach was shredded after making contact with a tree during heavy rains.

The accident took place as the balloon flew over Columbus Circle.

Despite the air getting let out of the balloon, the big green frog finished "marching" in the parade and looked "looked as if he passed out," host Pat Sajak said.

The frog concluded the parade in Herald Square as planned, but only about three feet off the ground.

FIGURE WITH A HEART

In 2008, a balloon created to look like Keith Haring's most popular work got into some trouble during the parade.

The balloon — dubbed "Figure with a Heart" — depicted a black-outlined white figure holding a red heart.

As the balloon made its way down the street, it hit the NBC Broadcast booth.

After striking the booth, shocking TV hosts Matt Lauer, Meredith Vieira, and Al Roker. Thankfully, there were no injuries.

In the 1956 Macy's Parade Might Mouse came very close to crashing at Columbus Circle.

As winds were measured to be peaking at 45 miles per hour, the Might Mousy balloon fell slowly dropped to the ground after its right arm and ear lost helium. 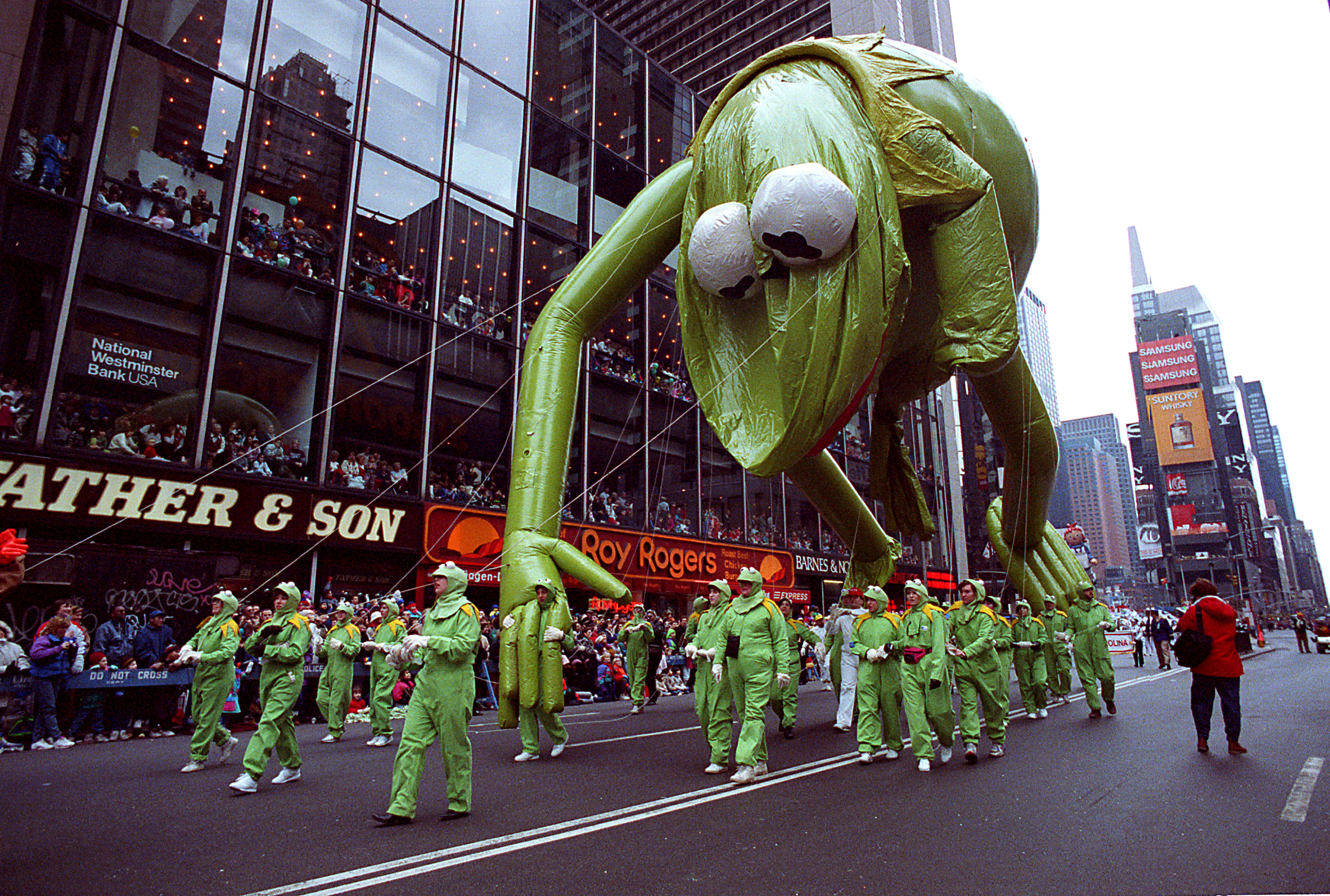 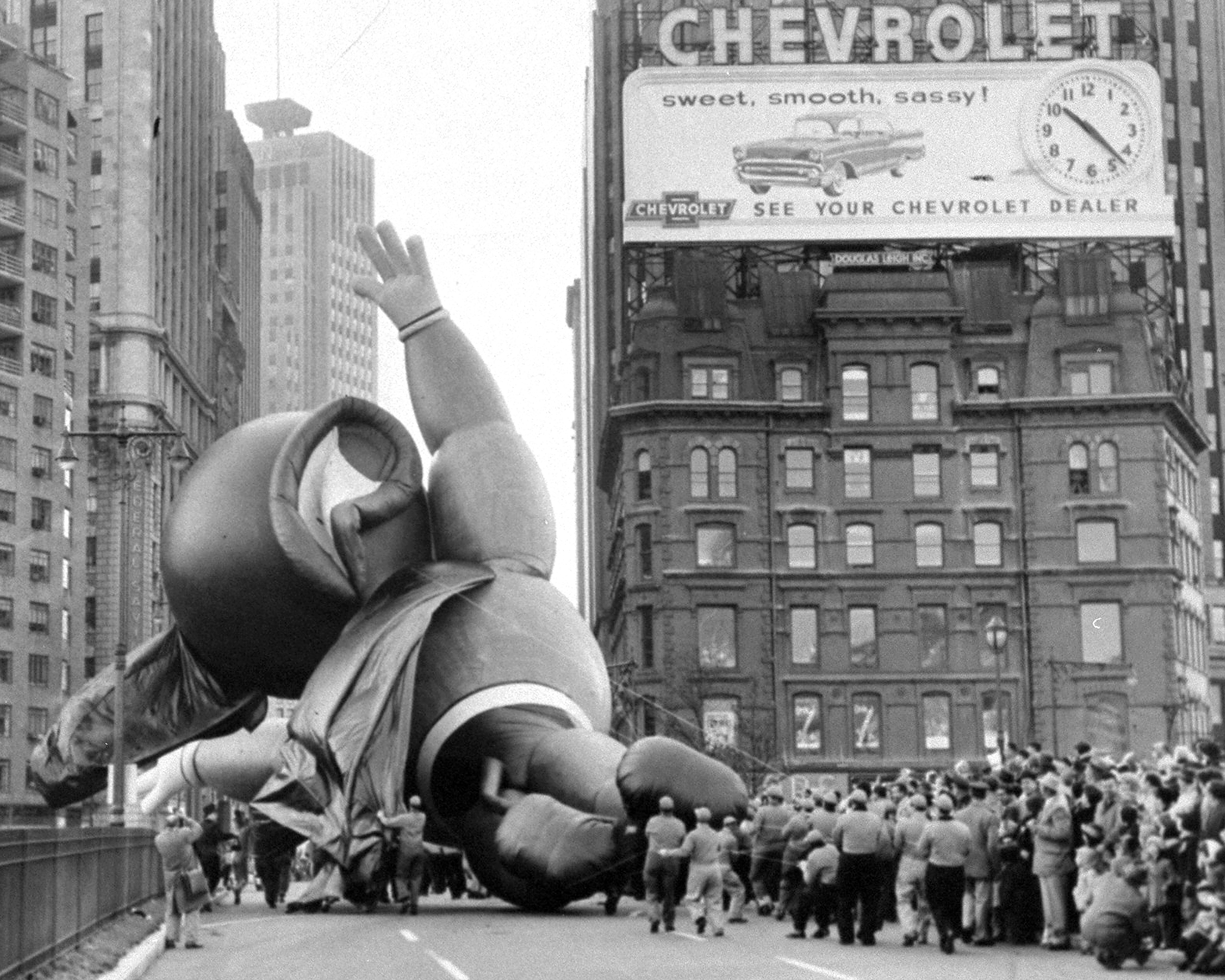 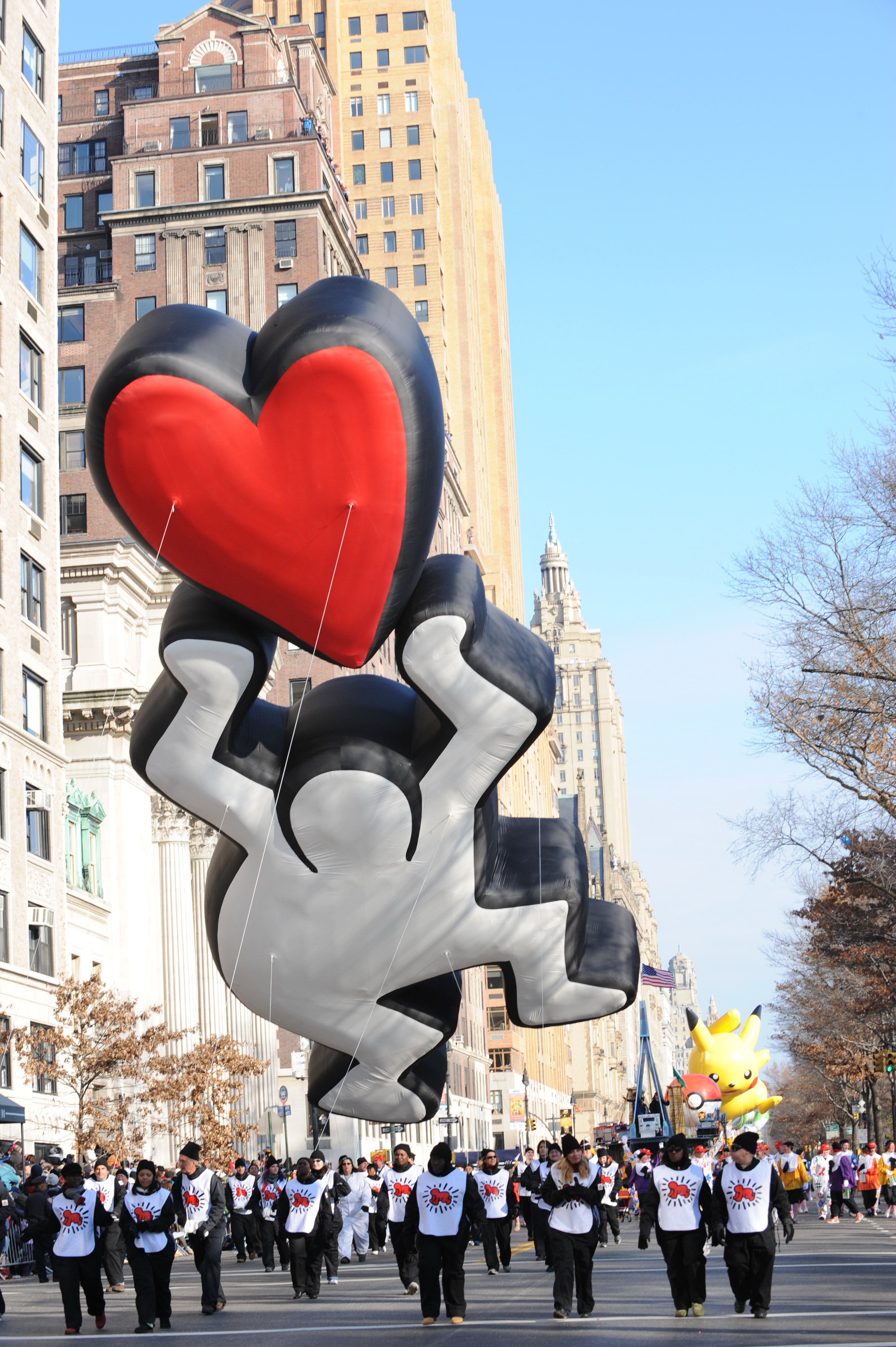