‘Make them in Australia’: NSW looks local for next transport fleet

Thousands of electric buses will be made in Australia as part of the NSW government’s next mammoth public transport program as it continues to deal with the long-term fallout of overseas purchases of trams, trains and ferries.

NSW Transport Minister Rob Stokes said the “vast majority” of 8000 zero emission buses the government planned on procuring before 2030 would be made in NSW, citing the COVID-19 pandemic and its impact on global trade and freedom of movement. 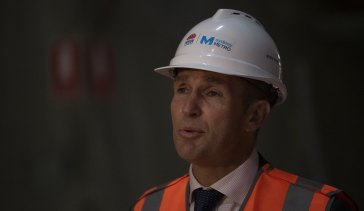 NSW Transport and Planning Minister Rob Stokes says the government will most of the new electric bus fleet in Australia.Credit:Rhett Wyman

As the government scrambles to find a timely solution for the paralysed inner west light rail system, which was suspended for up to 18 months when cracks were discovered in the entire Spanish-built tram fleet, Mr Stokes has committed to sourcing much of the next large-scale fleet of public transport assets locally.

With revelations this week of small cracks found in the hull of a brand new Chinese-built Emerald-class ferry, and ongoing complications with the smaller Indonesian-built River-class vessels, the government has come under increased scrutiny in recent weeks over its past decisions to look overseas for transport stock.

In 2015, the NSW government signed a deal with Spanish company CAF to supply trams to the inner west light rail line when Gladys Berejiklian was transport minister. Mr Stokes said no Australian firm had bid for the contract to build those trams.

Meanwhile, the ferries were ordered via private operator Transdev in 2019 after the NSW government signed a $1.3 billion contract with the company to operate the harbour service.

While the NSW Zero Emission Bus Strategy, which was released in September, outlined potential challenges with local market being able to ramp-up quickly enough to deliver a significant amount of stock, Mr Stokes said it was his intention the majority of new buses would be built in the state.

“We do have a good manufacturing capacity there and that’s a huge amount of work and so the preference will be for them to be built locally, and I suspect the overwhelming majority of them will be built locally and that’s the next big procurement piece staring us in the face,” he said.

As of October, just 17 zero emission buses had been delivered in the 2021-22 financial year, with Opposition Leader Chris Minns casting doubt over whether the government could live up to Mr Stokes’ promises.

“What is the minister committing to, is it building or assembling? And what about the next set of metros? Where will they be made? The reality is the NSW government has stopped building our transport projects here,” Mr Minns said.

While Mr Stokes said his preference would be for Australian-made transport products in the future, he also defended the government’s previous decisions to look overseas, and warned against the dangers of discounting international products.

Mr Stokes insisted the decision to pursue a majority Australian-built electric bus fleet was not a “knee-jerk” political reaction to the government’s recent transport woes, with local NSW manufacturers likely to provide competitive tenders for the fleet. He said the pandemic had also affected global supply chains.

“There’s actually more of an economic imperative or more of an economic opportunity to onshore manufacturing because some of our assumptions about relying on global supply chains have come unstuck as a lived experience of the pandemic,” Mr Stokes said.

The government announced in December last year its intention to convert the NSW bus fleet to zero emissions by 2030.

“It’s a bit ironic that the Labor Party is the party of the union movement is arguing for local manufacturing, when it’s on the basis of some of the pay and conditions that have been championed by the union moment that has pushed manufacturing offshore,” he said.

“The NSW Liberal’s six biggest offshore transport projects ended up with cost blowouts of between 40-50 per cent.”