A man accused of trying to elicit sex from a woman and threatening her, all while he allegedly posed as a health department official, remains in custody after withdrawing an attempt to get bail.

Police allege Abdulfatah Awow made threats of a sexual nature to a woman at her Burwood home on July 14 while claiming he was an authorised officer from Victoria’s Department of Health. 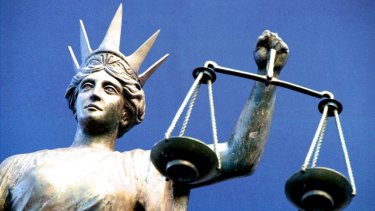 The man is facing 13 charges before the Ringwood Magistrates Court.Credit:Louie Douvis

Mr Awow was arrested last week and appeared before Ringwood Magistrates Court on Thursday, on a video link from custody, on 13 charges including attempting to procure sexual penetration by threats or fraud, and stalking.

The 25-year-old had planned to seek bail but withdrew his application before his hearing began.

On being told that development, magistrate David Starvaggi said: “The allegations are extraordinarily serious in the current environment.”

Charge sheets allege Mr Awow had the woman’s full name, address and telephone number when he arrived at her house.

Channel Nine last week reported that the woman let Mr Awow into her home but he was not wearing a uniform. She later asked him to leave and contacted police.

Mr Awow, of Carlton, is also charged with impersonating an authorised officer, being a trespasser with intent to assault and bail offences.

He was remanded in custody to appear in another administrative hearing on Friday. He could seek bail on a later date.

Our Breaking News Alert will notify you of significant breaking news when it happens. Get it here.