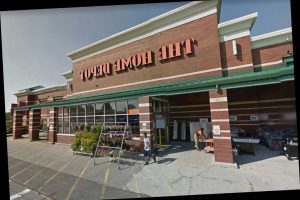 A hate-spewing suspect threatened to slash an Asian man at a Home Depot in Brooklyn — just a few hours after an Asian woman was attacked by a racist assailant in front of do-nothing onlookers in Manhattan, police sources said Tuesday.

The 28-year-old victim in Brooklyn was with his girlfriend at the store in East New York around 2:30 p.m. Monday when a stranger approached the couple, menacing them with a 2×4 piece of lumber, police sources said.

“Why you with that little d- -k Asian n—-r?’’ the suspect asked the woman, who is not Asian, according to sources.

He then snarled at her boyfriend, “I’ll cut you, you f–king Asian,’’ sources said. “Don’t call anyone. I’m a Blood, I’ll shoot you.”

The suspect then fled, and the victim, who lives in Rockaway Beach, Queens, reported the incident to workers at the store before heading to the 75th Precinct to talk to cops, sources said.

The victim described the suspect as black, having a thin build and a scar near one of his eyes, sources said.

Cops are now looking for possible surveillance footage of the incident — which is being investigated as a hate crime, sources said.

The attack occurred fewer than three hours after a 65-year-old Asian woman was randomly punched and kicked on West 43rd Street in Midtown — an incident caught on horrifying video tape.

“I’ve never seen anything like this in my life,” a police source told The Post on Tuesday, referring to the city’s anti-Asian crime wave.

The race-haters “think [Asians] are the reason why coronavirus is here. They think they’re the reason they have to wear a mask.”

In the Midtown case, the hulking suspect spat, “F–k you, you don’t belong here’’ while beating his Asian female victim in the street — as several male workers at a nearby building failed to rush to her aid, according to the footage.

One of the workers even appeared to just close the door when the suspect ran off, leaving the woman on the ground outside.

The suspects in both incidents are still in the wind.

The city has seen a 1,300 percent increase in crimes against Asian Americans since the start of the COVID-19 pandemic, which scientists say appears to have begun in Wuhan, China.