THE Florida swamp land being searched by cops hunting Brian Laundrie has been described as a "death trap" by survival experts.

Mark Burrows, who trains people to stay alive in the wild, said Gabby's missing fiance would be "living in hell" if he is hiding out in the Carlton Reserve. 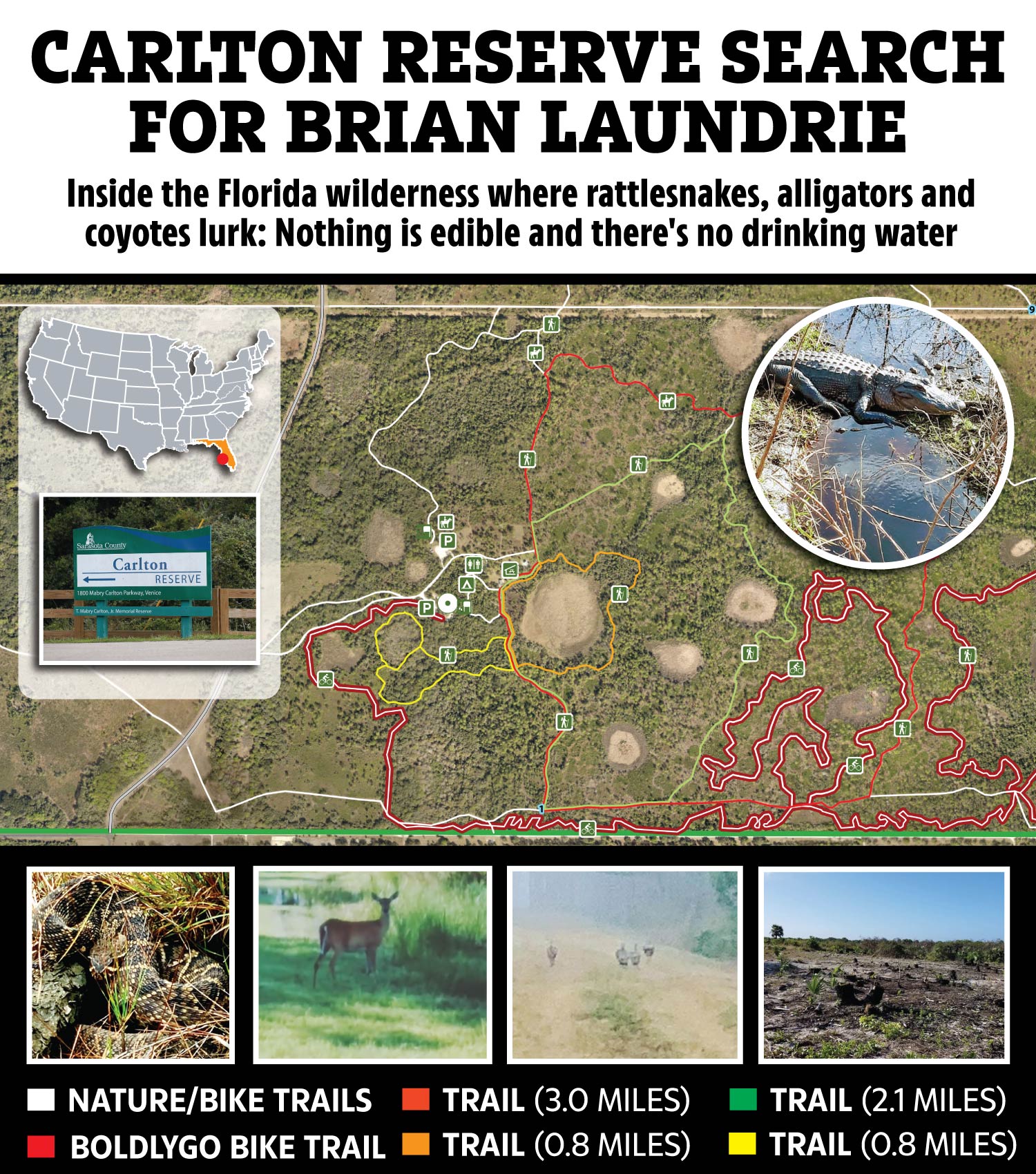 That's down to the alligators, snakes, coyotes and insects that inhabit the 25,000 acre swamp land.

Laundrie would also need to watch out for the terrain, Burrow said, which is "waist-deep in water in many areas" and has been described as "vast and unforgiving" by cops.

Safe drinking water would also be hard to come by as would edible plants and starting a fire would be hard on the water logged land.

And Burrow told The Herald Tribune: "It's dehydration that's the real danger."

WAS BRIAN EVER THERE?

He also suggested that if cops have found no evidence of Laundrie at the Reserve by now that means he probably was never there.

Authorities should have found tracks or sings he was eaten, Burrow told the paper.

A local hikers guide notes "people do get lost in the park" with new signage added to help those who become "disorientated."

The Carlton Reserve website notes many trials are "frequently wet or flooded."

Local Francine Smetts told The New York Post: "I can't imagine one night out there and I camp."

North Port Police Department Commander Joe Fussell said: "The terrain is very difficult. About 75% of it is underwater."

North Port police spokesperson Joshua Taylor noted: "Please be aware, the Carlton Reserve is a vast and unforgiving location at times. It is currently waist-deep in water in many areas.

"This is dangerous work for the search crews as they are wading through gator and snake-infested swamps and flooded hiking and biking trails."

The search for Laundrie entered its fifth day on Thursday.

Gabby Petito's fiance was reported missing by his parents last Friday. They told cops they had not seen their son since the previous Tuesday.

Since then authorities have been using drones and all-terrain swamp buggies to help in the hunt.

And thermal imaging is being used in the overnight hunt.

On Wednesday, an underwater recovery team was summoned to Carlton Reserve as part of the search.

More search equipment – including an aquatic vehicle – arrived on the scene on Thursday morning, pictures show.

In the days since he vanished, a series of possible sightings of Laundrie have been reported in a number of states, including elsewhere in Florida and in Alabama.

The most recent potential sighting came in Okaloosa County, Florida on Monday, when Facebook user Sam Bass shared an image of a man he spotted on one of his trail cams.

Police later confirmed the man was not Brian.

Another potential sighting of Laundrie was reported around two blocks from his parent's home in North Port, Florida on Friday.

Online sleuths are also wondering if Laundrie could have evaded authorities and made it across a border and into another country.

“Brian Laundrie most likely fled the country with his parents help weeks ago,” wrote one Twitter user.

A second person poked holes in that theory, noting: "This assumes that he has a passport. If flying, there would be traceable records.

Others believe Laundrie is no longer on land but on a boat after a post went live on Instagram for a matter of seconds on Monday.

The Sun has not been able to verify that Laundrie went live on his Instagram page.

A video clip that lasts a couple seconds shows the closeup of what appears to be a body of water and shot from a green vessel with the image of an empty gallon water bottle.

Gabby and Brian left in July on a journey that took them to national parks out West.

Investigators said Laundrie had returned in the van to his parents’ home in North Port, Florida, on September 1 without Gabby.

Gabby's mother said she pleaded with Laundrie for answers about where her daughter was but received no reply. She then reported Gabby missing to the police on September 11.

They’ve identified him as a person of interest in the case.

Gabby's body was found at a Wyoming national park on Sunday. An initial autopsy found her cause of death to be homicide.