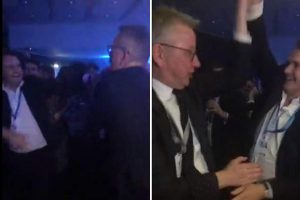 THIS is the bizarre moment Michael Gove once again tore up a dance floor – this time arm-in-arm with an MP at the Tory party conference.

Hilarious footage shows the cabinet minister, 54, with his hands locked with Tom Tugendhat's as they spin and twirl each other to Whitney Houston's I Wanna Dance With Somebody. 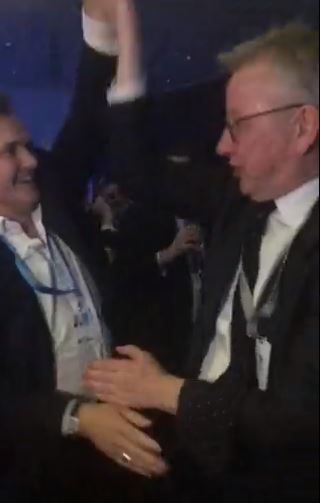 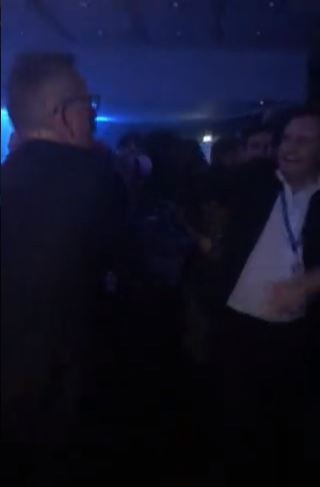 With a cover version of the 1987 hit blaring in the background, the fully suited Tory pair were caught on camera beaming as they threw shapes together to the tune on the packed dance floor.

Newly single Gove, and Tugendhat – MP for Tonbridge and Malling – can be seen laughing as they take turns to spin each other as they let loose at the Conservative party conference in Manchester.

But groover Gove – who split from his wife of 20 years, Sarah Vine, in July – is no stranger to the dance floor, having been filmed raving over the summer in his home town of Aberdeen.

To the amazement of other revellers, the politician danced in his suit at a techno club at 2.30am one August night.

He posed for photos with punters in an O’Neill’s pub below the club before going upstairs to check out DJ Nina Stanger’s drum-and-bass set.

Bemused staff said he tried to swerve the £5 entry fee by saying he was Chancellor of the Duchy of Lancaster.

Adam Taylor, manager of the club, said: “He was saying he shouldn’t have to pay.

“I told him my co-manager Nina was upstairs playing jungle and going hard.

“Michael said ‘I LOVE dancing’ — and did he ever.

“He spent the next 1½ hours dancing almost non-stop despite the other, paying, ­patrons often looking to engage him in spirited discussions about Government policies.”

Gove's dance floor antics come after finally admitted he was wrong to blow up Boris Johnson’s leadership campaign in 2016, saying he bitterly regrets it.

He claims he has told the Prime Minister he is sorry for stabbing him in the back and added: “Everybody knows I made a mistake then.”

And by giving him a job in the Cabinet, Michael Gove said that he feels the pair have wholeheartedly made up after the intrigue five years ago.

He said BoJo appears to have buried the hatchet, gushing: “As well as being a great Prime Minister, Boris is also instinctively generous-hearted.

"He has been nothing but a great boss.” 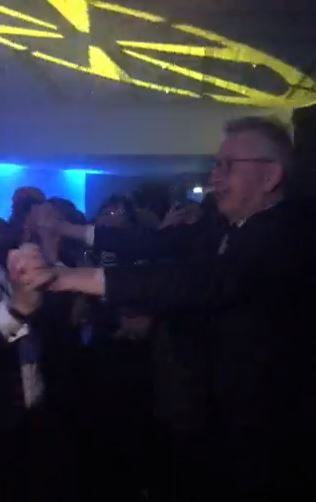