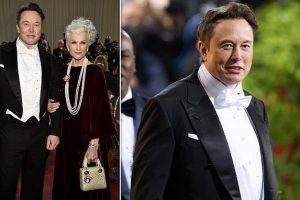 ‘My companies are to do good for the future of humanity’: Elon Musk bats off criticism he should have spent $44bn on charity not Twitter as his mom chimes in ‘I told him not to take on the world’

Elon Musk has batted off criticism he should have spent the $44 billion on charity rather than to buy the social media platform Twitter.

The Tesla and Space X CEO insisted during an interview at the Met Gala that he already does ‘a lot of things philanthropically’ and that his companies were created to ‘do good for the future of humanity’.

His mother Maye Musk, a model, chimed in saying that she ‘told him not to take on the world, but he didn’t listen’.

Musk’s public philanthropy gestures have so far trailed other billionaires, giving him less than 1 per cent of his wealth to good causes – the same figure as Jeff Bezos.

In contrast, billionaire investors Warren Buffett and George Soros had given away more than 20 per cent last year, according to business magazine Forbes. 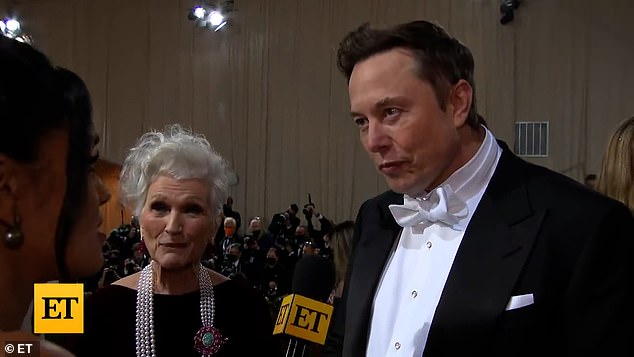 The Tesla and Space X CEO (right) insisted during an interview at the Met Gala that he already does ‘a lot of things philanthropically’ and that his companies were created to ‘do good for the future of humanity’. His mother Maye Musk (left), a model, chimed in saying that she ‘told him not to take on the world, but he didn’t listen’ 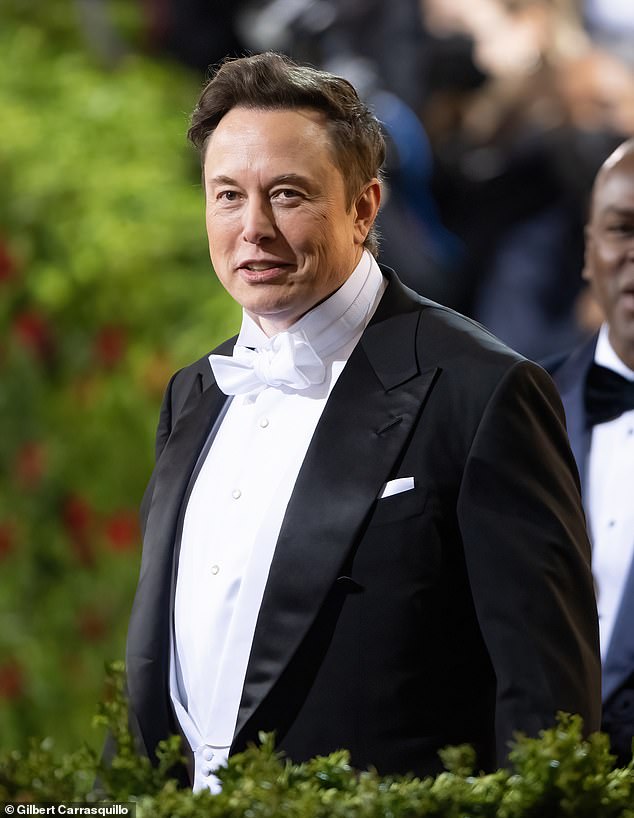 Musk’s (pictured at the Met Gala on Monday) public philanthropy gestures have so far trailed other billionaires, giving him less than 1 per cent of his wealth to good causes – the same figure as Jeff Bezos

Critics have questioned why Musk, who has enough money to change ‘the fabric of American society’ has instead decided to spend it on a social media platform.

‘It would just be nice if Musk decided to get on board with humanitarian efforts and spend more money on something meaningful, let’s say this country’s blights of homelessness and poverty. Instead, he bought Twitter,’ wrote Suzette Hackney in an OpEd for USA Today.

When asked why he has not spent the $44billion on charity, philanthropy or to do ‘more good’, Musk told Entertainment Tonight: ‘Well I do do a lot of things philanthropically and really my companies are intended to do good for the future of humanity.’

Musk pointed to his companies, noting how Tesla aims to ‘accelerate the advent of sustainable transport and energy’ while Space X is ‘providing internet to the least served people around the world’.

Musk added: ‘We’ve also been able to help Ukraine with the Starlink terminals and give them connectivity in some of the hardest hit areas.

‘Aspirationally I am trying to do good for humanity and the future of civilisation.’

His mother Maye, when asked where Musk got his mentality, said: ‘I told him not to take on the world and the universe, and he didn’t listen. He doesn’t listen to mom.’

In November, Musk donated about 5 million shares of Tesla stock worth $5.7 billion to charity, according to a regulatory filing – but it is still not clear which charity he donated to.

But the donation sparked debates in and out of philanthropy, about transparency, tax deductions and congressional legislation, along with speculation about where exactly the money was donated.

Some experts say Musk likely donated his shares to his donor-advised fund, or DAF for short. DAFs are essentially charitable investment accounts in which donors can claim a tax deduction upfront but aren’t legally required to distribute the money. 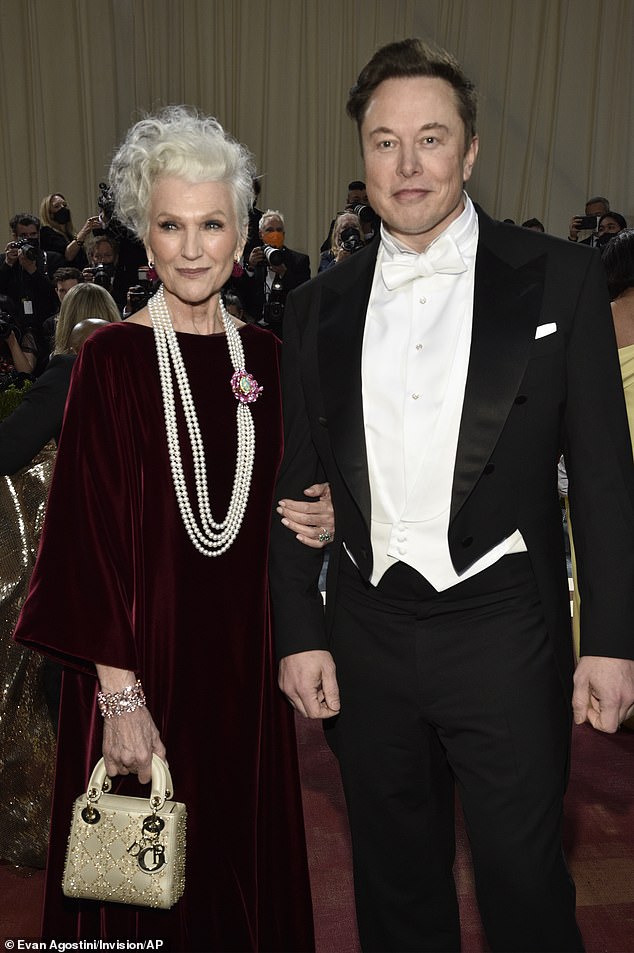 Maye Musk, left, and Elon Musk attend The Metropolitan Museum of Art’s Costume Institute benefit gala celebrating the opening of the ‘In America: An Anthology of Fashion’ exhibition on Monday in New York

Experts say that would be the most advantageous strategy for Musk, currently the world’s richest man with an approximate net worth of more than $220 billion.

A DAF donation would allow him to claim a tax deduction of as much as 30% of his 2021 adjusted gross income, instead of 20% if he had donated it instead to his foundation. Musk could also deduct the fair market value of the stock, instead of its original value.

‘He can do whatever he wants with his money — anyone can,’ said John Arnold, a billionaire philanthropist who co-founded the Laura and John Arnold Foundation and Arnold Ventures with his wife, Laura. ‘But if he’s getting a subsidy from society through this tax deduction, then there’s a responsibility that goes with it.’

Whether or not Musk donated his Tesla shares to a DAF, Arnold said, the possibility that he did highlights a questionable tax loophole for many wealthy Americans.

‘Society is giving them this tax deduction, this subsidy to encourage more resources to get to communities,’ Arnold said.

‘But the way that the tax law is structured today, it doesn’t necessitate that that happens. You can get the tax deduction today, and there’s no requirement for that money ever to get to the community. You can give money to a donor advised fund and keep it in a tax-free investment account forever.’

Arnold and others who want to address that loophole have formed a coalition, the Initiative to Accelerate Charitable Giving, that seeks to tighten requirements for DAFs and other financial vehicles used by the wealthy. 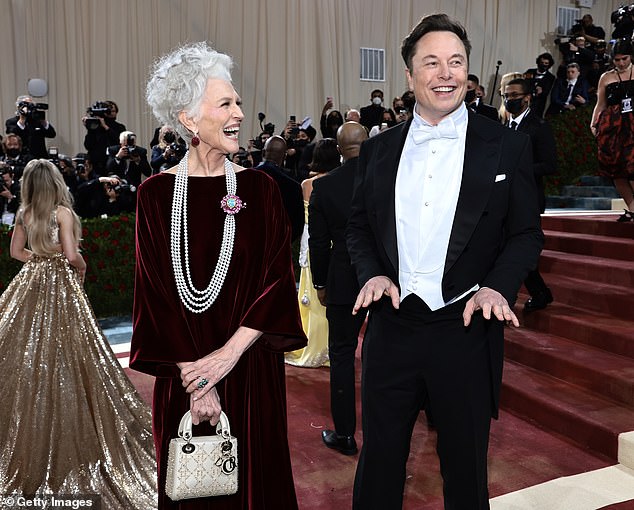 When asked why he has not spent the $44billion on charity, philanthropy or to do ‘more good’, Musk told Entertainment Tonight : ‘Well I do do a lot of things philanthropically and really my companies are intended to do good for the future of humanity.’ Pictured: Musk with his mother Maye at the Met Gala

If Musk did place Tesla shares in a DAF, the tax law’s intent backfired, Arnold said. The community received neither the tax revenue generated by Musk’s income on the shares or the philanthropic benefit that the tax deduction was meant to create.

Generally, Musk’s approach to donations has differed from that of many other wealthy donors, who are often accused of publicizing their gifts as a way to burnish their reputations.

About a month before donating his stock, the notoriously provocative Musk engaged in a Twitter fight with the head of the United Nations World Food Programme, who had urged billionaires to donate $6 billion on a ‘one time basis’ to help end starvation.

Musk said he would sell $6 billion of Tesla stock and donate the proceeds to the agency if it could show how the money would solve world hunger. David Beasley, the organization’s executive director, said it had yet to receive a donation from the Tesla CEO.

Soskis, of the Urban Institute, has suggested that there’s room for Musk to be more transparent about his gifts while still signaling his ‘contempt’ for ‘elite public opinion,’ as the Tesla CEO frequently does.

At times, Musk does provide transparency about his donations. In 2020, he gave $50 million to St. Jude’s Children’s Research Hospital. He also donated about $30 million to a variety of public schools and nonprofits in south Texas, where SpaceX builds its rockets.

His private foundation’s latest IRS filing shows he donated 11,000 Tesla shares to the charity in 2019. From July that year to June 2020, the foundation distributed $23.6 million in grants. Some of that went directly to working charities, but a large chunk — $20.7 million — went to Fidelity Charitable, a grantmaker that sponsors DAFs.

Some who have worked with Musk explain his style of philanthropy by saying he isn’t focused on looking good.

Marcius Extavour, vice president of climate and energy at XPrize, which manages Musk’s $100 million prize for carbon removal, says Musk wanted the project to be focused on finding impactful solutions and didn’t want it to use his image everywhere. That’s in contrast to some other donors, who, Extavour asserts, seem more concerned about invitations to speaking engagements and other events.

‘It’s been pretty nice to work with the Musk Foundation as a donor who is not.. nitpicking on how we describe this or how we describe that,’ Extavour said. ‘Or making sure they get the shine or the limelight.’

Steve Greanias, general manager of fundraising solutions for the fundraising platform GiveSmart, says that like most people working in philanthropy, he is curious about where Musk’s money went and how it was or will be used. Yet he doesn’t think it’s necessarily everyone’s business to know. His own platform, which serves about 8,000 nonprofits and has processed about $800 million in donations, accepts anonymous donations.

‘If you have this kind of money and you want to do good with it and you don’t feel the need to be recognized for it, that’s OK,’ Greanias said. ‘That’s between you and the organization. As long as your relationship’s OK with them, it shouldn’t matter if the world wants to know where money came from.’

It comes as Musk last week disclosed he sold $8.5 billion worth of Tesla stock following his agreement to buy Twitter.

The new financing, which could come in the form of preferred or common equity, could reduce the $21 billion cash contribution that Musk has committed to the deal as well as a margin loan he secured against his Tesla shares, the sources said. 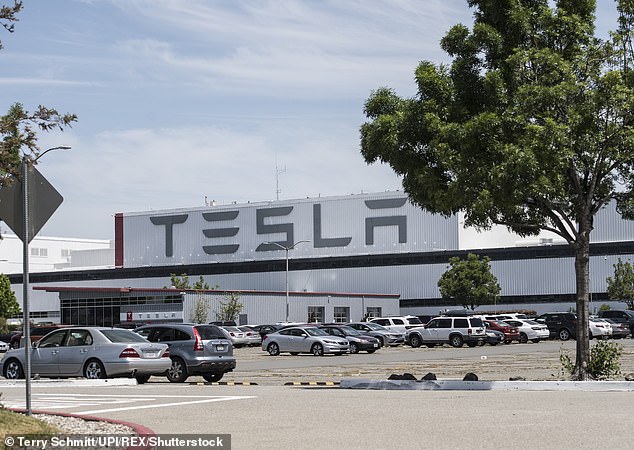 Musk has also pledged some of his Tesla shares to banks to arrange a $12.5 billion margin loan to help fund the deal.

Investors have been fretting over whether Musk will complete the Twitter deal given that he has backtracked in the past.

In April, he decided at the last minute not to take up a seat on Twitter’s board.

In 2018, Musk tweeted that there was ‘funding secured’ for a $72 billion deal to take Tesla private but did not move ahead with an offer.

Twitter shares ended trading up 0.2% at $49.14 in New York on Monday, closer to the $54.20 per share acquisition price, as investors interpreted the news on the new financing discussions as making it slightly more likely that the deal will close.

Musk would have to pay a $1 billion termination fee to Twitter if he walked away, and the social media company could also sue him to complete the deal.

Musk, who calls himself a free speech absolutist, has criticized Twitter’s moderation policies.

He wants Twitter’s algorithm for prioritizing tweets to be public and objects to giving too much power on the service to corporations that advertise.

‘This is one of the most diversified, I think, crews that we’ve had in a really, really long time,’ said NASA’s space operations mission chief Kathy Lueders.

The astronauts arrived at the space station Wednesday night, just 16 hours after a predawn liftoff from Kennedy Space Center that thrilled spectators.

‘Anyone who saw it realized what a beautiful launch it was,’ Lueders told reporters. After an express flight comparable to traveling from New York to Singapore, the crew will move in for a five-month stay.

SpaceX has now launched five crews for NASA and two private trips in just under two years. Elon Musk’s company is having an especially busy few weeks: It just finished taking three businessmen to and from the space station as NASA’s first private guests.