New Covid ‘epicentre’ where rates rising fastest revealed – is YOUR area on the hotspot list?

A NEW coronavirus epicentre has emerged in the North East as cases continue to rise across the country.

The interactive map below reveals if your areas is a hotspot, as data revealscases are as high as the January peak in one region.

While the North West continues to record the most daily infections, a Covid cluster has erupted in the North East, data from Public Health England (PHE) shows.

It is also the highest rate recorded anywhere in England since January 10, when Knowsley in Merseyside recorded a rate of 1,367.5.

Two of the most infected areas in the country are in the North East and four of the five areas where cases are also rising the fastest are in the area.

Next is North East Lincolnshire, followed by Stockton-on-Tees, where cases have also increased from 295.9 to 610.6 per 100,000 in the last seven days. 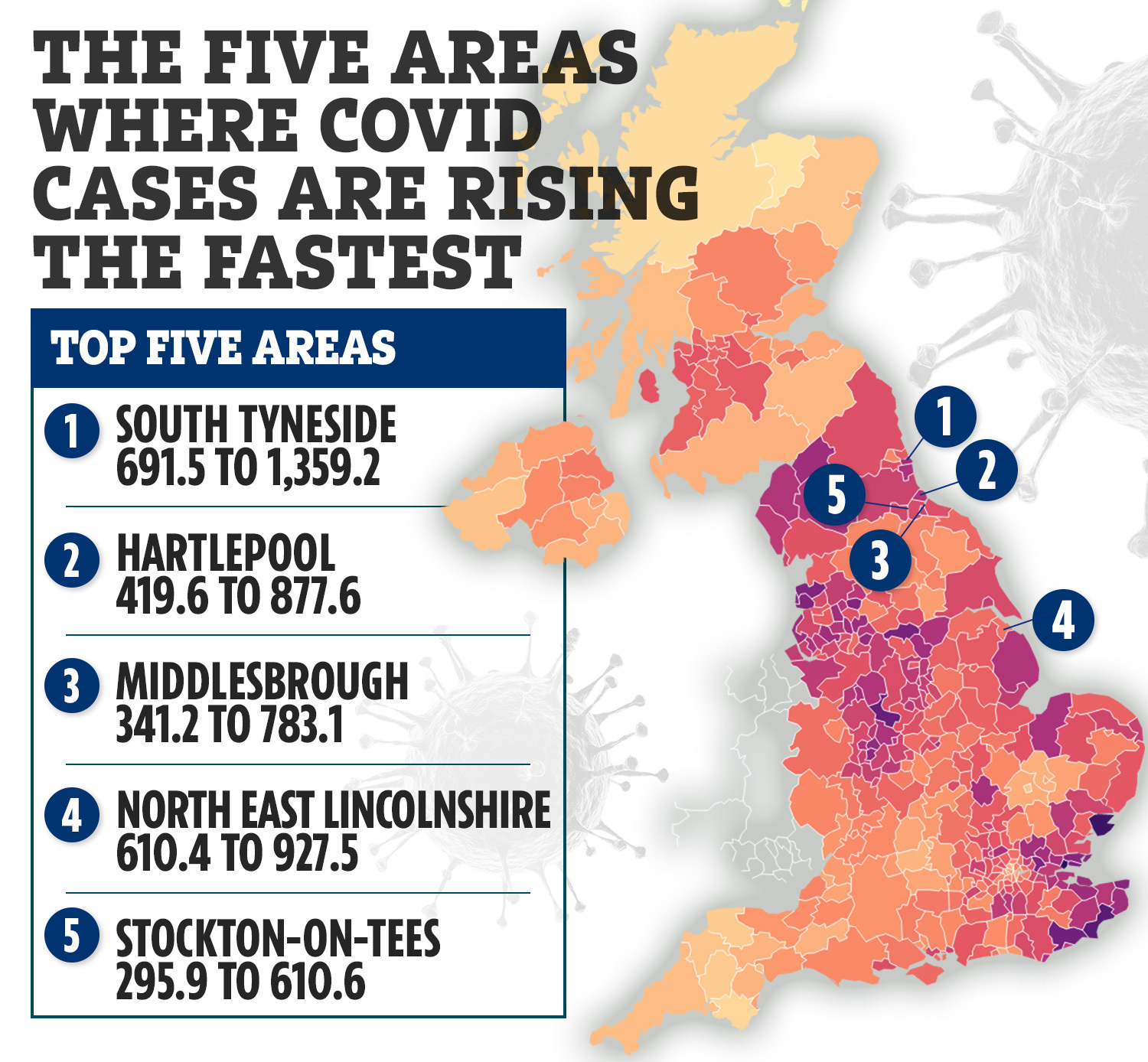 Cases are climbing in every single region, but some have seen a bigger jump than others.

The UK is set to unlock on July 19, but last night England's chief medical officer said that unlike previous Covid waves, this one could see local areas hit harder than before.

Professor Chris Whitty said there would be an exit wave – but that it wouldn't materialise until August.

At the moment the North West has the highest number of people testing positive on a daily basis, with 4,769 people reporting positive tests each day.

This has climbed slightly from two weeks ago where cases were at around 4,366 each day.

In the North West 106 people a day are needing Covid treatment in hospitals.

The region is followed by London, where 4,201 people are testing positive each day and 64 people are being admitted to hospital with the virus on a daily basis. 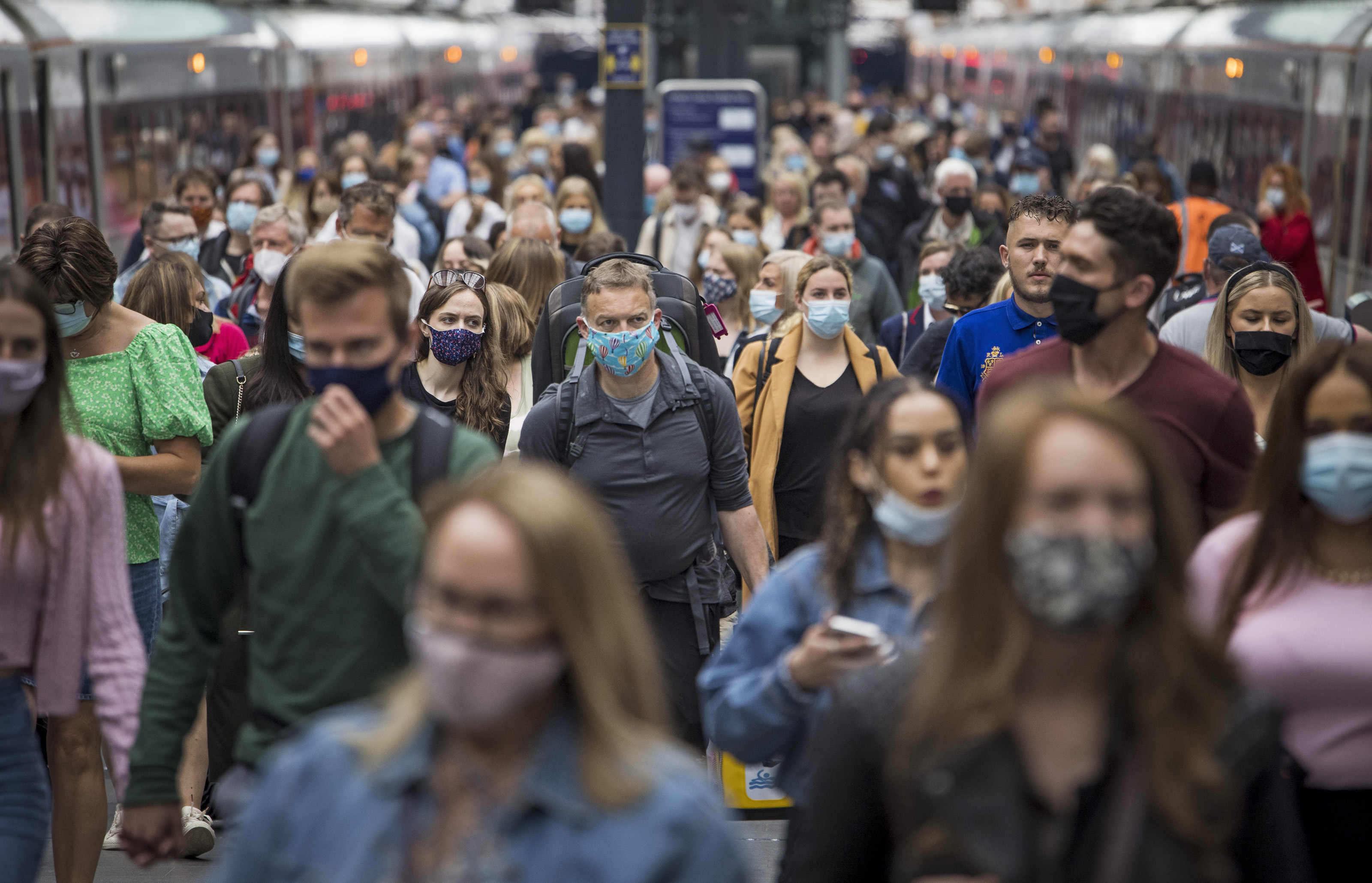 In the South East, 3,994 people are testing positive each day, with 35 hospitalisations a day.

Further North and in Yorkshire and the Humber, 3,632 people are testing positive each day.

Hospital data for Yorkshire and the Humber is combined with the North East and between the two regions there are 103 people being admitted to hospital with the virus each day.

In the West Midlands, 3,020 people are testing positive each day and data for the whole of the Midlands is combined for hospitalisations and across the region, 82 people a day are being admitted for Covid.

Next is the South West where 2,953 people are testing positive daily and 27 people are being admitted to hospital each day.

In the East Midlands, 2,227 people are testing positive each day.

The East of England has the lowest daily infection rate and there 2,211 people are testing positive each day – with 25 people a day being admitted to hospital.

Yesterday it was reported that Covid cases in the UK have risen by 34,471 – as Sajid Javid warns they could leap to 100,000 a day in weeks – but deaths remain stable at six.

It is the sixth day in a row that the number of new infections has topped 30,000.

The latest health stats show that there were 34,471 new Covid cases, bumping up the total number of infections since the start of the pandemic to 5,155,243.

This is a jump from the previous Monday, when 27,334 cases were reported.

There were six more deaths within 28 days of a positive coronavirus test, with the UK's Covid death toll now at 128,431.