Home » World News » ‘Nothing about us without us’: The government should include the disabled when reforming the NDIS

‘Nothing about us without us’: The government should include the disabled when reforming the NDIS

Late last week the federal government’s attempt to create a mechanism to independently assess individuals’ eligibility for funding under the National Disability Insurance Scheme foundered on opposition from the states and territories.

Under independent assessments, government-contracted health professionals would have examined individuals’ disabilities and therefore their eligibility for funding, and the rate of that funding. At the moment, those assessments are made by people’s own medical specialists. 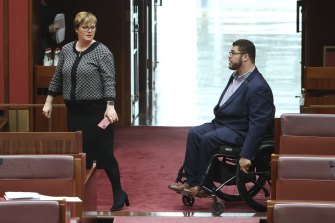 Minister for the NDIS Linda Reynolds and Greens senator Jordon Steele-John during a debate in Parliament.Credit:Alex Ellinghausen

It was initially understood as a tool to be used in certain cases to establish access rights to the scheme, though it later changed to become scheme-wide and was extended to determining the rate at which funding was paid. The disability community understood it as an attempt to rein in costs.

Its rejection was not a simple case of states versus Canberra or partisan politics. Trials of the assessment mechanism had created broad opposition to the approach and scope from experts, the scheme’s Independent Advisory Council, disability advocates’ groups and, most importantly, disabled people themselves.

The government has insisted that it needs a reliable lever with which to keep the scheme’s costs sustainable, a point that former Rudd government adviser Andrew Charlton underlined in an opinion piece for this masthead. Perhaps the Morrison government should think less in terms of leverage and more in terms of building trust. On this front it has created something of a rod for its own back when it comes to service delivery and empowering historically disadvantaged communities.

Senator Linda Reynolds’ predecessor as NDIS minister was Stuart Robert, of robo-debt infamy, and it was while he still held the portfolio earlier this year that this masthead first revealed some of the less savoury plans to exclude people from accessing the scheme. At the same time, talk of “co-design” when it comes to NDIS changes evokes the troubled history of that term as applied to consultations over a Voice for Indigenous Australians.

In his recent book on political leadership, former senior public servant Don Russell noted “the Commonwealth’s involvement in expanding new areas such as the [NDIS], aged care, mental health and suicide prevention”. He added that “as opposed to traditional Commonwealth service-delivery responsibilities such as pension payments, which rest on large, systems-based platforms, these new areas involve highly discretionary engagement with people”.

When our national affairs editor, Rob Harris, revealed that the report of the ostensibly independent Tune review into the NDIS had been subject to significant amendments driven by its administering body, the NDIA, and the Department of Social Services, it gave credence to shadow minister Bill Shorten’s accusation in a speech to the National Press Club that “in 2021 the NDIS has the front door padlocked to the genuinely needy and the backdoor wide open for crooks and profiteers”. Mr Shorten did not go into detail about profiteers, but we need look no further than the vocational education and training debacle and some cases in aged care to see how private providers can game a federally funded system.

Whatever the cause, it is clear the NDIS is very expensive and costs are rising fast. As Mr Charlton pointed out, its budget “interim update” alleged it would cost $60 billion by 2030 – more than the cost of Medicare, more than the Commonwealth now spends on defence and school education combined. In all our interests, we need to make sure that money is being spent well.

But The Age believes tinkering with the way individuals’ disabilities are assessed is not the best way to do that. From the outset, the NDIS has been about power. It should be about giving disabled people the power to set out a vision for the services that will determine the quality of their lives and their ability to map out new horizons, in genuine consultation with the NDIA, the federal government and the states and territories.

In 2016 Indigenous Australians responded to the Coalition’s changes in service provision under the Indigenous Advancement Strategy by issuing the Redfern Statement, with its rallying cry of “nothing about us without us”. It is a principle that applies every bit as well to the questions surrounding the NDIS.

Those who work with the disabled across this country are constantly struck by the ingenuity and determination they bring to overcoming obstacles in their path on a daily basis. Instead of adding bureaucratic obstacles, we need to put the voices and experience of people with disabilities at the centre of tackling the issues of access and provision.

Gay Alcorn sends an exclusive newsletter to subscribers each week. Sign up to receive her Note from the Editor.