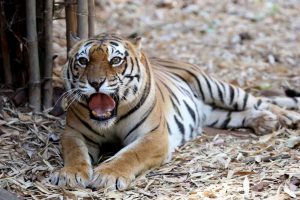 A notorious poacher believed to have killed at least 70 endangered Bengal tigers was nabbed in Bangladesh after a two decade-long manhunt, according to reports.

Habib Talukder — known as Tiger Habib — was finally snared by police in the South Asian country on Saturday thanks to a tip, the Bangladesh daily Dhaka Tribune reported.

Talukder, 50, was caught in a village near the vast Sundarbans forest on the border between India and Bangladesh.

The mangrove forest is home to one of the world’s largest populations of Bengal tigers and was Talukder’s hunting ground.

But this time, “Acting on a tip-off, we finally succeeded and sent him to jail,” Rahman told Agence France-Presse.

Talukder started out by harvesting honey from wild bees in the forest — and later became a local legend for his exploits hunting the big cats and skirting arrest.

Pelts, bones and even the flesh of the tigers would be bought by black market traders who would them sell them in China and elsewhere, according to AFP.

“We equally respect him and are scared of him,” local honey hunter Abdus Salam told the outlet.

“He’s a dangerous man who could fight alone with Mama (tiger) inside the forest.”

According to the Bangladesh Forest Department, the Bengal tiger population fell to a record low of 106 in 2015 from 440 in 2004.