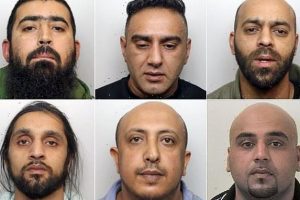 No police were sacked over child grooming scandal: Officers avoided serious sanction over failures that let down victims of Rotherham gangs

Not a single police officer has been sacked over widespread failures that let down victims of Asian grooming gangs in Rotherham, it was revealed yesterday.

A report by the Independent Office for Police Conduct said urgent action was needed to deal with problems that ‘still exist’ in handling child sex abuse cases.

But after six years of work, and with only one misconduct hearing outstanding, no officer has been fired for mistakes made.

Many officers exploited a loophole that meant if they resigned or retired they could not face disciplinary proceedings.

The IOPC said eight officers had a case to answer for misconduct and six for gross misconduct.

Five received sanctions up to a final written warning, which one campaigner branded ‘just a slap on the hand’.

However, despite the apparent lack of accountability, the watchdog found that some historical police failures were continuing today and the report made 12 recommendations to improve training, police practices and called for a change in the law to protect sexual abuse ‘survivors’ from having their future life prospects damaged by their past experiences.

Steve Noonan, the IOPC director of major investigations, said there was ‘still work to do’ despite improvements in police methods.

He added: ‘Survivors of abuse will no doubt be deeply concerned, as are we, that some of these problems still exist today and we urge the police to act on these recommendations urgently to provide much needed reassurance to the public.

‘It is a tragedy that so many of the survivors we spoke to now have criminal records as a result of their actions while being exploited and there must be action across the judicial system to protect vulnerable young people and safeguard their futures.’

A full IOPC report into the actions of South Yorkshire Police in dealing with sexual exploitation in Rotherham will be published after the final misconduct hearing.

The report called for improved training of police. It stated that officers and staff ‘without the right skills’ led investigations and people ‘given tasks they were not trained to carry out.’ Training had been improved but more was needed, it said.

There were ‘many instances where crimes were not recorded when they should have been’.

In particular there has been ‘no discernible improvement’ with an issue of failure to record crimes against vulnerable children.

More should be done to help and communicate with victims and there had been ‘missed opportunities’ by police to work with community leaders.

The IOPC found that many victims now had criminal records from incidents during the time they were being ‘exploited.’ Such ‘survival crimes’ may have taken place whilst under the influence of the abuser.

But the criminal records made it more difficult for victims to find work.

The IOPC has called on the Law Commission to look at offences committed where a child is being groomed or exploited. The possibility of using this as a ‘defence’ and to allow convictions to be legally kept secret should be considered.

Better police leadership and training was also required to allow a culture change.