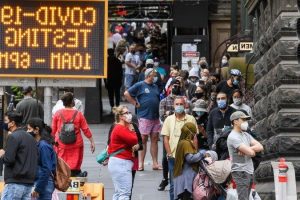 Less than a month after the first Omicron case was detected in Victoria’s hotel quarantine system, the milder but far more infectious variant makes up more than three-quarters of COVID-19 cases detected.

Samples collected over the Christmas period indicate that 76 per cent of cases in Victoria are Omicron, according to the state’s Health Department, with further testing required over the next week to confirm the finding. 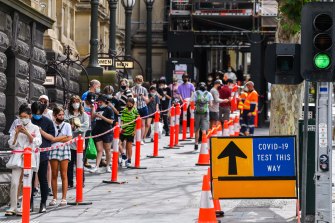 Doherty Institute professor Ben Howden, whose public-health laboratory has been leading genomic testing of Victoria’s cases throughout the pandemic, said “it’s been just remarkable how quickly case numbers have escalated”.

“This capacity for Omicron to spread and overtake the previous lineage is pretty impressive, and that’s happening in Victoria, it’s happening in Australia, and around the world,” he said.

On the first day of the new year, record daily COVID-19 cases were reported in Australia – including 7442 in Victoria and 22,577 in NSW. There is still significant uncertainty about what surging cases will mean for hospitals and the health system at large. 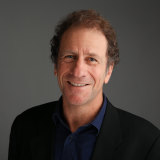 New data from more than a million COVID-19 cases in the UK has found the risk of hospitalisation due to Omicron was a third of the rate of the previously dominant Delta variant.

But with Omicron circulating primarily among the young and a known lag between when people test positive and fall sick, Kirby Institute epidemiologist John Kaldor says it too early to confidently say how big the surge in Australian hospitalisations might be.

“We are still probably a few weeks out from knowing how this is going to unfold,” he said.

Public health officials say a big proportion of cases is likely going undetected, and Professor Kaldor said it would not be too wild a guess to suggest there at least were three to five times as many cases as officially notified.

Coronavirus-related admissions to NSW hospitals have risen almost fivefold since the start of December to 901. Australian Medical Association president Omar Khorshid said the impact of these new admissions was being felt in extremely busy emergency departments already suffering from an acute shortage of nurses exacerbated by staff infections.

He expected new restrictions on elective surgery following the Christmas break to free up space for COVID-19 patients.

“Even though the COVID patients are not as sick as they were with Delta and there are fewer in ICU, they’re still taking up beds, they still need nurses to look after them,” he said.

“Doctors are not seeing massive numbers of COVID cases yet in Victoria, but they’re still extremely busy [and] they’re watching what’s happening in New South Wales and they know that it is coming.”

Dr Khorshid said premiers had signed up to the idea that everyone was going to get Omicron. He said the only thing they could do now was focus on rolling out booster shots.

“The die is cast already,” he said.

“I’m worried that states may need to [go] back into lockdown at some point and people say that that’s being somewhat negative and fatalistic and so on, but if you look around the world, that’s exactly what’s happening in first-world countries, in Germany and other European countries, in the UK, they’re having to bring back a lot of restrictions because they just don’t have any other choice.”

On Saturday, Victoria’s Roads and Public Transport Minister, Ben Carroll, said there were no plans for more COVID-19 restrictions and that the government did not expect Victoria would reach a “worst-case scenario” of 25,000 cases daily.

Mr Carroll urged Victorians to wear masks, maintain a safe distance from others and book in their third vaccine dose when they are eligible as a critical step to combat Omicron.

The introduction of an indoor mask mandate for most Victorians was accepted by Mr Foley.

Professor Sutton warned in the advice: “Without additional public health interventions, there is a clear and realistic possibility of widespread infection and serious illness, an unsustainable burden on the health system and substantial disruption to economic and social activities throughout the community.”

Professor Howden, director of the Doherty Institute’s Microbiological Diagnostic Unit Public Health Laboratory, said about 500 to 800 COVID-19 samples were being screened in Victoria each day through genomic sequencing and PCR tests.

A team of about 15 laboratory staff has been working long hours to deliver the results. Some molecular scientists have worked up to 14 days in a row, at times.

But Professor Howden said in the coming weeks Omicron was expected to become so dominant that it would no longer be necessary to do large-scale genomic testing, and his team would revert to sampling a smaller number of cases from travellers, hospitalised patients, healthcare workers and representative community samples.

“I think we are going to see that Omicron is dominant everywhere for the short term, but something may change again, and we need to be on the lookout.”

Professor Adrian Esterman, chair of biostatistics and epidemiology at the University of South Australia, said NSW could easily hit 100,000 daily cases by the end of January if the virus maintains its trajectory.

He said it was safe to assume that Omicron had become the dominant variant nationally, but the proportion of Delta cases was unknown because most states and territories were no longer performing widespread genomic screening.

The NSW Health Department confirmed it was conducting genomic sequencing only when it might help a patient with COVID-19.

With Rachael Dexter and Carrie Fellner