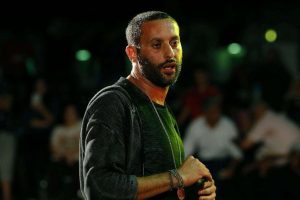 Amid the violence and bloodshed between Israel and Hamas, Palestinian rapper Tamer Nafar, an Israeli citizen, said he is scared for his life and is asking for help from international organizations.

The leader of the first Palestinian hip-hop group spoke to ABC News from Lod, Israel, the epicenter of the violence, where both Palestinians and Israelis live. Authorities imposed a curfew on the city, but Nafar said even after it went into effect, he could see Israeli settlers walking on the streets with weapons.

“As a citizen of the most democratic country in the Middle East, I called the cops. … At the same time, I’m seeing a lot of settlers coming from … all over … and they are equipped with short Uzis and with weapons,” he told ABC News, while also pointing to a video on his Instagram of the moment.

Nafar said that when he called the police, the woman on the phone told him not to worry and that they would “take care of it.” However, from his apartment window, he said the police were escorting these people.

“I’m seeing me, having two kids in my house unarmed — as I said, my only weapon is my microphone — and I’m being locked in my house and I have armed people being protected by police,” he said. “So she gave me the supervisor of the police and the supervisor of the police told me, ‘Sir, I don’t owe you any answer,’ and then she hung up. And this is how we feel unprotected.”

“So, as somebody who is scared for his life, the only solution is that somebody, any organization, [like] the U.N. … since the Israeli police is … not protecting me, I’m asking for protection,” he added. “Me and another 1.6 million Palestinians held hostages inside of Israel.”

The Israel Police did not immediately respond to requests for comment from ABC News.

It’s the worst outbreak of violence between Israeli forces and Hamas, the Palestinian militant group ruling over the Gaza Strip since a 50-day war in 2014. Between airstrikes and violence on the ground since Monday evening, 122 Palestinians have died, including 31 children, and at least 900 have been wounded, according to the Palestinian Ministry of Health. Eight Israelis have died and over 523 others have been injured, according to the Israel Defense Forces.

Palestinian forces began firing rockets at Israel earlier on Monday evening, a day after the holiest night of Ramadan, during which Israel Police and Palestinian protesters clashed at the al-Aqsa Mosque in Jerusalem’s Old City. Israel responded with hundreds of its own airstrikes.

The IDF said Thursday that more than 1,500 rockets had been fired from the Gaza Strip into southern and central Israel since Monday, and that at least 350 failed, landing in Palestinian territory. Israeli airstrikes have hit over 600 terror targets in the Gaza Strip, according to the IDF, including three residential buildings that Israeli officials said were used by Hamas. Civilians were warned to evacuate beforehand, the IDF said.

Israel Prime Minister Benjamin Netanyahu has vowed to continue the retaliatory attacks toward Hamas. On Thursday, he repeated a promise to charge “a very heavy price.”

“The last word was not said, and this operation will continue as long as necessary,” he said on Twitter.

He also condemned rioting and clashes that have broken out on the streets since Monday.

There are also now growing concerns that Israel’s military will launch a ground invasion of the Gaza Strip. Early Friday, the IDF said that ground forces, including tanks and artillery, were firing into the Palestinian territory from the Israeli side of the border.

The IDF said there were currently no Israeli boots on the ground in the Gaza Strip, correcting a previous statement to ABC News that troops had entered the territory.

Nafar said Palestinians in Israel have long lived as “second-class citizens” and that they don’t benefit from the same rights as Israeli Jews.

While acknowledging there are differences, he said there are also some similarities between the struggle he’s currently experiencing and that of Black Americans facing racism in the U.S.