Singapore: At a regional forum in May, Cambodia’s Hun Sen was asked pointedly about his reliance on China in tackling the pandemic and gave a pointed answer.

“If I don’t ask China, who am I to ask for help? The people floating across the river?” he replied.

Four months later, after encountering a surge of cases that led hundreds of thousands to be confined to their houses and struggle for food, his unashamed leaning on Beijing has at least provided one upside to the misery wrought by the virus.

One of the primary beneficiaries of China’s vaccine diplomacy, Cambodia has, according to its health ministry, administered at least one shot to more than 70 per cent of its population of 16 million – including 95 per cent of adults. Nearly 55 per cent of people have had both.

Phnom Penh, home to about 2 million, is now also the most vaccinated capital city in the world on a per capita basis, according to Mekong Strategic Partners, a Cambodia-based investment advisory firm that has released a report on the south-east Asian nation’s vaccination program.

A health worker prepares a dose of the Sinovac’s COVID-19 vaccine at the Phnom Penh Thmey Health Centre in the capital.Credit:AP

“It’s just been a remarkable effort. There are a lot of things that they get wrong here which they do get criticised for. But on [the vaccine rollout] they have nailed it.”

Rights groups have slammed Hun Sen’s regime for its virus response on a range of fronts. They have denounced its use of the pandemic to further clamp down on freedom of expression by harassing journalists and arresting and prosecuting people who have been critical of the government under a repressive new law in the guise of countering misinformation.

Human Rights Watch also accused the government of leaving people in the capital to starve at the height of its worst outbreak in May when areas were colour coded based on the infection rate and as many as 300,000 in so-called red zones were shut in their homes for weeks.

But the kingdom’s free vaccine program is eight months ahead of schedule and should be completed as much as a year ahead of neighbouring countries, the report by Mekong Strategic Partners says. 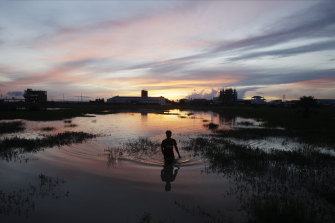 A man catches fish in Chres village on the outskirts of Phnom Penh.Credit:AP

In a region that is the global epicentre for COVID-19 and its variants, Cambodia has the advantage of not having a shadow of the population of Indonesia, the Philippines, Vietnam, Thailand and Myanmar, nor even half that of Malaysia.

More than 27 million of the 30 million doses it has received have come from chief sponsor China, according to Cambodia’s health ministry. Most have been paid for rather than been gifted by the superpower, but in a health crisis in which vaccine supply has been a serious challenge, being positioned at the front of the queue has been key.

There have also been donations from the United States and Japan as well as via the COVAX Facility including shipments of AstraZeneca, which Cambodia has begun to use as booster shots for those who were vaccinated with Sinovac or Sinopharm. And after starting to vaccinate children over 12 last month, there is Moderna and Pfizer on the way for a scheme run by private hospitals in which the mRNA products can be purchased.

Along with the procurement itself, the report credits the vaccination progress to “simple ring-fenced distribution” based on location rather than age tiers, low vaccine hesitancy and vaccine mandates for large sections of the community such as the armed forces and public service.

“Cambodia is sitting right between Vietnam and Thailand, which are both being whacked by Delta at the moment,” Higgins said.

“We’ve got Delta here as well but it’s not really taking off. It’s just kind of bumping along the bottom because the place is vaccinated. So by the end of this month, we’re expecting that the government will pretty much re-open everything in the country.”

Border crossings to Thailand have been re-opened after they were closed in July and provinces facing the neighbouring country were locked down. 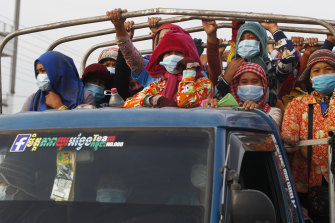 Cambodian garment workers head to work outside Phnom Penh in May following a lockdown. Credit:AP

But Cambodia, which has recorded nearly all of its 95,000 cases and nearly 2000 deaths since April, is still averaging more than 400 new infections and a dozen deaths a day over the past week and remains on high alert.

Dr Li Ailan, the World Health Organisation’s representative to Cambodia, said the government had been proactive in accessing and distributing doses but warned “vaccine optimism” could be dangerous.

“Vaccinations alone are not a silver bullet, they are just one of the critical tools in fighting COVID-19 and in reducing severe disease, hospitalisations and deaths,” the WHO Cambodia office said in a statement last month.

“Together we have come far, and we must continue to stand together; otherwise the hard-fought gains that have been made will be lost.”