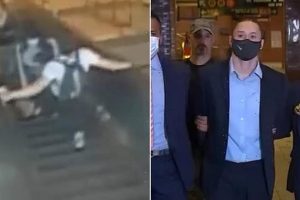 Police arrest Brooklyn man, 32, caught on surveillance footage ‘kicking woman down subway station escalator after he pushed past her and she said “Excuse me”‘

A suspect believed to be the man caught on camera shoving a woman down a New York subway station escalator has been caught by cops.

Police arrested 32-year-old Bradley K. Hill, 32, on Friday and charged him with assault.

Police say on the afternoon of September 9 Hill kicked a woman down the escalator of the Atlantic Avenue-Barclays Center station in Brooklyn, New York.

Scroll Down For Video:

Bradley Hill, (center) was photographed on his perp walk with a fresh haircut on Friday. 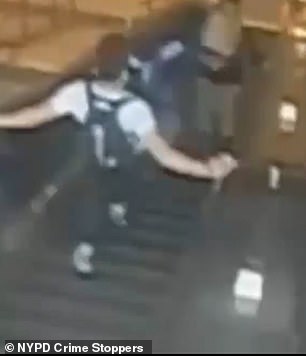 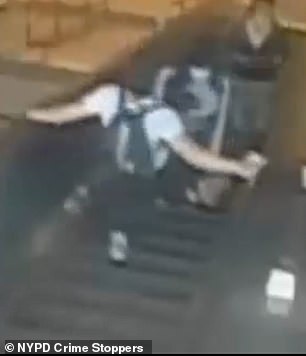 New York City police say the 32-year-old woman was attacked after she confronted a man for shoving past her on the escalator at the Atlantic Avenue-Barclays Center Station at 7.15pm

Footage of the incident shows the 32-year-old drop kicking a woman in the chest after walking past her on the escalator.

She is captured tumbling down while he calmly walks away.

The incident is said to have unfolded because the unidentified victim, also 32, asked Hill to say ‘excuse me’ after he pushed his way past her on the ride up to the street, she told ABC 7 News earlier this week.

Police say Hill responded ‘I did’ and suddenly kicked her in the chest.

‘He just kicked me out of nowhere,’ she said. ‘And I just came tumbling down the escalator, past everyone, all the way to the bottom floor.’

She told ABC 7 that the incident has left her traumatized.

”Say excuse me,’ that’s the New York way,’ and that was it,’ she said. ‘And then out of nowhere, he felt the need to have to kick me down the stairs. You know, as if I had the audacity to address him and tell him and say, ‘Excuse me,’ at that moment. He felt like he just had to kick me down.’

He was charged with assault and attempted assault, it is unclear if he is currently in custody or out on bail.

This is the latest violent incident on a New York City subway train.

On September 5 a New York father and his young daughter were spat on and threatened with a knife by a male passenger after asking him to stop smoking marijuana on the train.

A video released by the NYPD revealed the incident which was captured on a cellphone on a Manhattan D-Bound train in the Bronx earlier this month.

The footage captured the alleged pothead sitting in his seat as he was seen spitting on the 35-year-old father and his four-year-old daughter, who were seated on the other side of the doors a few feet away from the man.

According to the NYPD, there were 2.19 felony crimes reported per one million riders for the month of August relating to murder, rape, robbery, grand larceny, felony assault and burglary, according to The New York Post.

The August statistic was an increase as compared to 1.78 in July and 1.77 in June.

Cameras were installed on Monday as an effort to monitor subway crime and keep people on public transportation safe.

‘The number of arrests have dramatically increased. Part of that is directly attributable to cameras,’ Warren said.

‘You are not anonymous in the subway right now if you are out there trying to prey on our riders.’