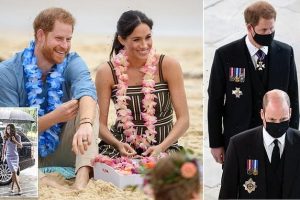 William’s ‘huge row with Harry over Meghan bullying claims’: New book says dispute led to split, the Duke believed she had an ‘agenda’, Kate was ‘wary from the start’ – and staff said she ‘played victim, but was the bully’

Prince William split his household from Prince Harry’s following an angry phone conversation over claims Meghan Markle was bullying palace staff, a royal author has claimed in his new book.

A friend of the Sussexes said ‘William threw Harry out’, according to Robert Lacey’s book Battle of the Brothers which is featured in the Times, after staff claimed Meghan ‘played the victim, but was a bully’ and William told his friend he thought she had an ‘agenda’.

William felt ‘hurt’ and ‘betrayed’ by the rift, with the heir to the throne telling a friend his wife Kate ‘had been wary of Meghan from the start’. He said he felt Meghan was ‘stealing his beloved brother away from him’, according to extracts from the book.

And Lacey quotes a Kensington Palace courtier as saying: ‘Meghan portrayed herself as the victim, but she was the bully. People felt run over by her. They thought she was a complete narcissist and sociopath — basically unhinged.’

The author also writes that he believes that William believed that Meghan had an ‘agenda’ and had voiced his reservations to Harry before their engagement, but that the row after Meghan and Harry’s trip to Australia in 2018 sealed his decision to split their households.

The rift was sparked by an official email claiming Meghan was bullying palace staff, which was sent by Jason Knauf, communications secretary to the Cambridges and Sussexes, in October 2018. Staff has already been allegedly coined a ‘half joke’ #freeHarry.

A friend of the Sussexes said ‘William threw Harry out’, according to Robert Lacey’s book Battle of the Brothers, after staff claimed Meghan ‘played the victim, but was a bully’ and William told his friend he thought she had an ‘agenda’. Pictured, Harry and Meghan in Australia

A spokesman for the Sussexes has since said the couple are the target of a smear campaign, and denied allegations of bullying.

William heard the allegations from Simon Case, his private secretary, who was sent the email. He immediately picked up the phone to call his brother, but the conversation ended with Harry slamming down the phone, the book claims.

Lacey also dwelled on the Sussex’ interview with Oprah Winfrey, where the author wrote Prince Harry claimed the brothers’ falling out began because the Firm was jealous his wife Meghan was so good with people, something he said echoed his mother Princess Diana’s treatment.

But the brothers were no longer on speaking terms before Harry and Meghan left for Australia, the book states, adding that it was bullying allegations that sparked a brutal row.

Kensington Palace was known for keeping courtiers in their jobs for long periods of time, so it was unusual when multiple aides quit in a short space of time.

As those who left formed an informal fraternity they called Sussex Survivors’ Club,  Mr Knauf decided to do something to combat the alleged treatment.

During the Sussex’ interview with Oprah Winfrey Prince Harry claimed the brothers’ falling out began because the Firm was jealous his wife Meghan was so good with people. Pictured, the brothers at the Duke of Edinburgh’s funeral in Windsor in April

Texas-born and New Zealand-educated Mr Knauf was known for having a kind demeanour and loyalty to his staff. He wrote in a letter to Mr Case ‘I am very concerned that the duchess was able to bully two PAs out of the household in the past year’.

He said Meghan’s alleged treatment of staff was ‘totally unacceptable’ and added that she ‘seems intent on always having someone in her sights’. He said ‘report after report’ had been filed by witnesses of unacceptable behaviour by Meghan.

One courtier said ‘Meghan governed by fear’ and when approached about her behaviour she was said to have replied ‘it’s not my job to coddle people’.

Despite being one of Meghan’s closest advisers, Mr Knauf decided to send the email because his once sympathetic attitude towards the duchess had shifted.

One aide told a colleague ‘I can’t stop shaking’ in anticipation of an encounter with Meghan, while another accused her of ’emotional cruelty and manipulation’.

Another claimed they were left with Post Traumatic Stress Disorder (PTSD) after working for the duchess. 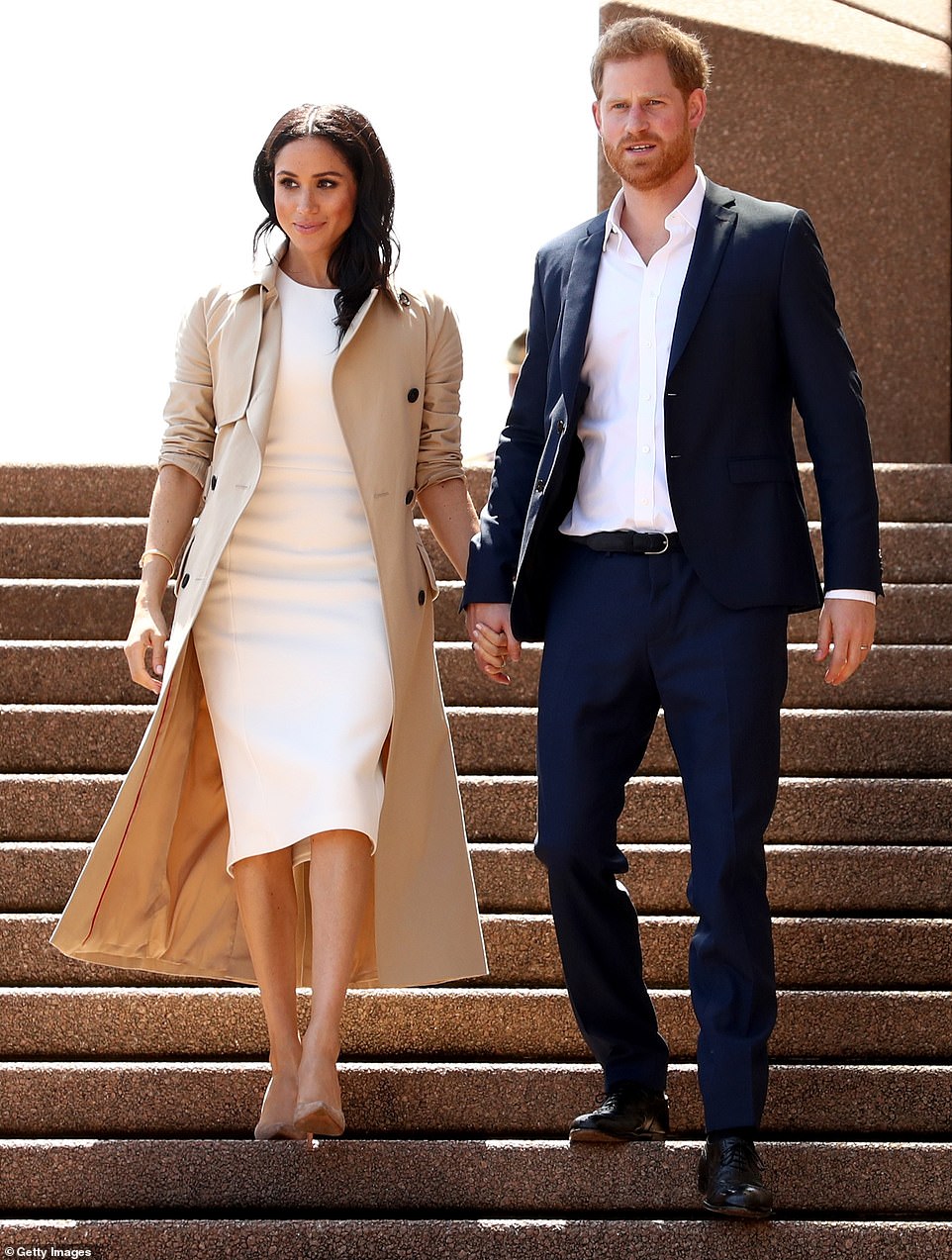 Kensington Palace was known for keeping courtiers in their jobs for long periods of time, so it was unusual when multiple aides quit in a short space of time. Pictured, Harry and Meghan at the Sydney Opera House in 2018

One courtier said: ‘I overheard a conversation between Harry and one of his top aides. Harry was screaming down the phone. Team Sussex was a really toxic environment.’

Meanwhile, the Duke and Duchess of Cambridge were said to be ‘paternalistic’ about their staff, just being ‘really nice’ to make up for the low pay.

When William was told of the bullying allegations he was enraged, the book claims, because he knew the staff personally and considered them to be assets to the palace.

It also confirmed his suspicions Meghan was hostile to the royal system, and he wondered if she planned all along to bring Harry with her to the US.

Meghan’s lawyers and PR said this was the wrong interpretation of their clients thinking in a statement provided to the Times in March 2021.

The above claims were written in Mr Knauf’s memo and were branded ‘defamatory’ by the Sussexes. It also relies on the personal account of a friend who William spoke to following the argument. 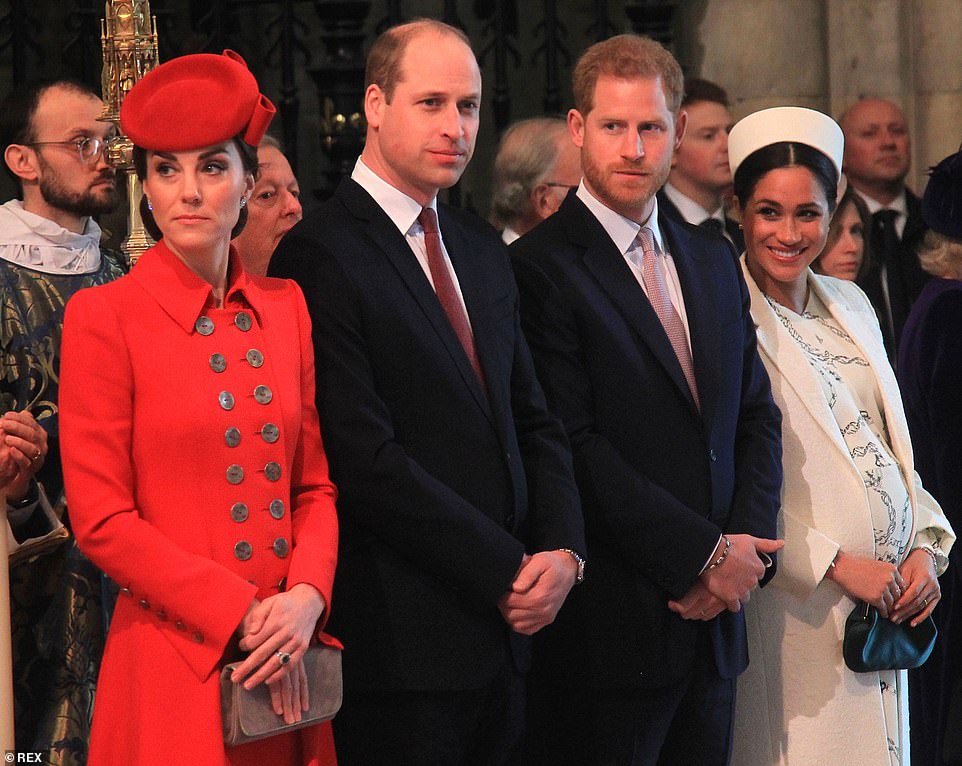 They said William called Harry after hearing the allegations, but Harry flared up in defence of his wife. When William persisted, Harry shut off the phone, the book claims.

Lacey wrote that William had reservations about Meghan early on, warning Harry to take the relationship slow. He believed she had an ‘agenda’.

In the book one staffer said Meghan portrayed herself as a victim but was actually the bully, calling her a ‘narcissist’ and ‘basically unhinged’.

William had to put the monarchy ahead of his brother, and stopped seeing it as his duty to protect the younger sibling, while Harry was equally angered his brother believed the accusations being fired at his wife, the book claimed.

Some sources claim in the heat of arguments the word ‘racist’ was used, though others deny this.

In the interview with Oprah, Harry said he believed ‘unconscious bias’ may have played a part in Meghan’s treatment.

While it was previously assumed Prince Harry decided to split the households, it was actually Prince William who made the call. He wanted to be separated from Meghan, according to the book.

After the argument in autumn 2018, Mr Case was told to start the process of dividing their two households immediately, Lacey wrote.

MailOnline has contacted representatives for Harry and Meghan as well as Kensington Palace for comment.