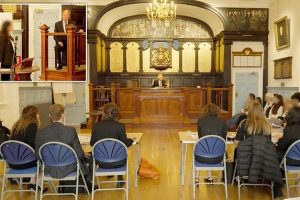 Two schools have been accused of ‘brainwashing’ pupils as young as 12 by holding an eight-hour mock trail for a Tory MP.

Teachers from All Saints School in Weymouth and The Woodroffe School in Lyme Regis were slammed for bringing fictional claims against Richard Drax.

They tried to pin slavery ‘charges’ against the former British Army officer over his relatives’ role in the trade hundreds of years ago.

The fake prosecutor accused the MP for Dorset of ‘benefitting from the proceeds of slavery’.

Forty pupils aged between 12 and 18 were involved in the case, taking on the roles of lawyers while others were split into three juries.

The three child juries found Mr Drax guilty, although they dismissed a second count that he ‘had acted like his ancestors while performing his role as MP’. 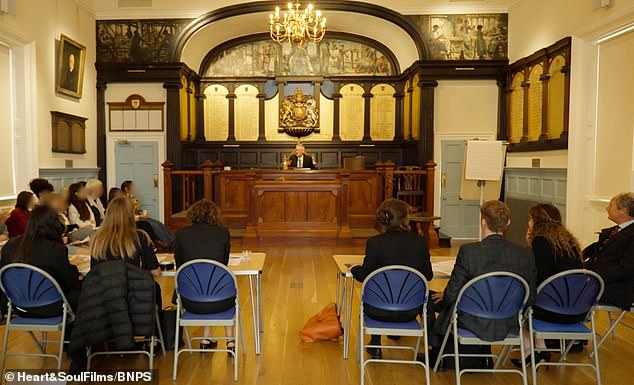 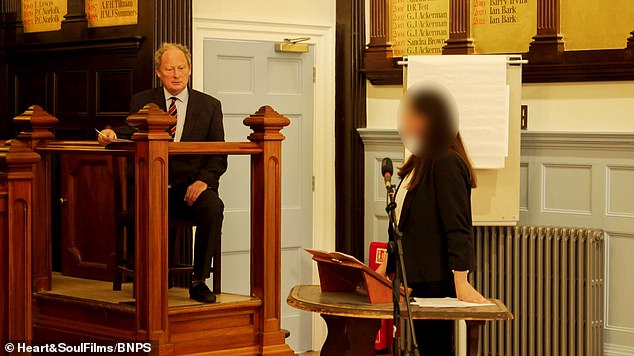 They tried to pin slavery ‘charges’ against the former British Army officer (pictured, an actor playing him in the dock) over his relatives’ role in the trade hundreds of years ago 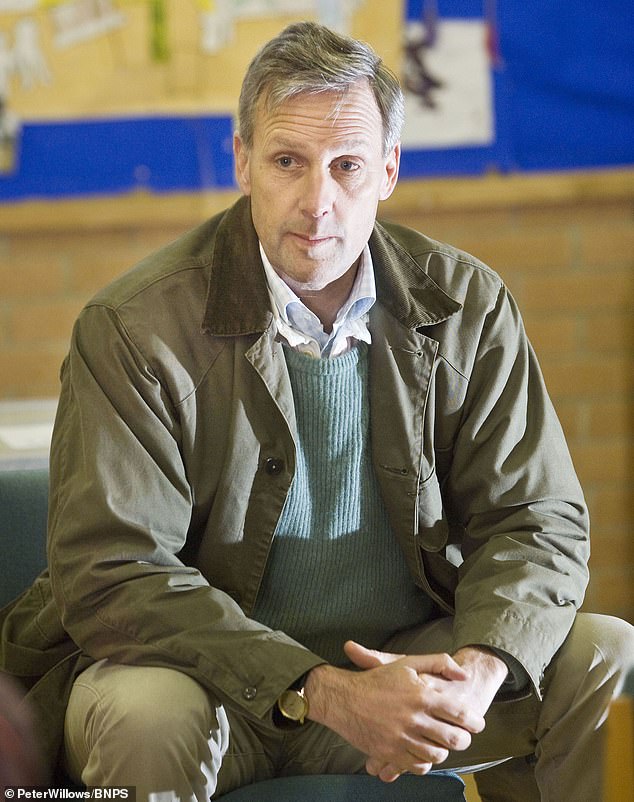 The fake prosecutor accused the MP for Dorset (pictured, the actual politician on another occasion) of ‘benefitting from the proceeds of slavery’

What is the 3DCentre? Non-for profit run left wing lawyers

3DCentre is a UK charity founded by Clive Stafford Smith. It campaigns against what it sees as injustice, fights cases and, on its website, claims to ’empower young people in rural areas’.

These focus on jobs in human rights, climate action and economics. Also on the team is Dr Nick Hollely, who is operations and projects manager.

He is a former consultant who focuses on climate action. 3DCentre also has a steering group, made up of a number of lawyers.

Barrister Samantha Knights QC is one of them and has posted a number of left wing tweets in the past. She has railed against Priti Patel and the Home Office over the government’s immigration policy.

Chris McGovern, a retired head teacher and chairman of the Campaign for Real Education, said: ‘I do not think school children should be putting anyone on trial.

‘This is an example of out of control brainwashing and it should not be allowed as schools are duty bound to be impartial, not have an agenda.

‘There is room for a balanced debate based on knowledge but this is a type of fanaticism.’

The event was organised by human rights lawyer Clive Stafford Smith – who has written for the left-wing Guardian newspaper – who pretended to be a judge.

It was the first ‘Generation on Trial’ which Mr Stafford Smith’s charity 3DCentre is staging.

It holds make believe trials for politicians accused of crimes of ‘messing up the world’ for their generation.

Mr Stafford Smith’s initiative only appears to target figures on the right of the political spectrum.

Others who face fictional prosecution are expected to be Nigel Farage, Boris Johnson, Priti Patel, Tony Blair and Jeff Bezos. 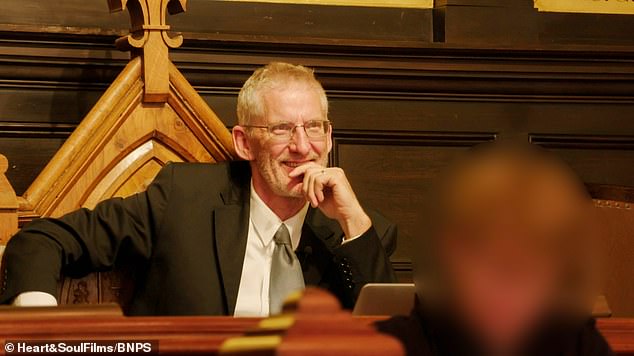 The event was organised by human rights lawyer Clive Stafford Smith (pictured, smirking as he pretended to be a judge) 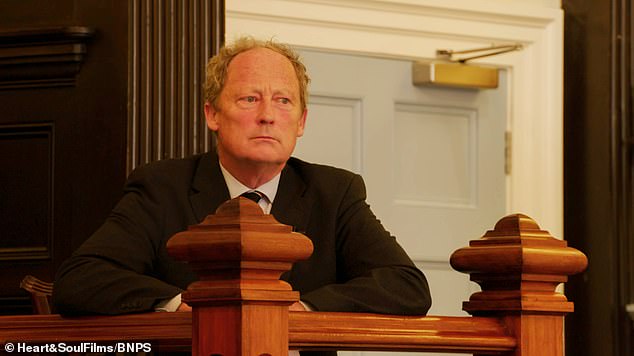 Clive Stafford Smith: Lawyer who fought against the death penalty in the US

Clive Stafford Smith is a human rights lawyer who is best known for his work trying to abolish the death penalty in the US.

Not all of his campaigns have been successful. ‘Over the years, I have watched six of my clients die: two in the electric chair, two in the gas chamber and two on the lethal injection gurney…

‘If I am forced to choose, I would probably say I hate the electric chair the most.’

He is also noted for his work with convicts held at Guantanamo Bay.

He has represented more than 80 of them since 2002 but 40 are still locked up there.

Stafford Smith was born in Cambridge and went to the prestigious Old Buckenham Hall School and Radley College before moving to the US to study journalism.

He did another degree after this in law and practised in Louisiana.

Mr Drax, whose family established a sugar plantation in Barbados in the 1620s, declined an invitation to turn up to give a defence.

Instead an actor was drafted in to play the role of Mr Drax at the trial held at Bridport Town Hall in Dorset.

Sir Philip Colfox was instructed to respond how he thought Mr Drax might do to questioning.

Prosecution witnesses included a supposed slavery expert while a wealth manager was brought in for the defence to explain it was ‘legitimate’ to inherit wealth.

Mr Stafford Smith, 62, said: ‘We had some students from two schools doing a series called Generation on Trial where we are putting people from my generation on trial for how they have messed up the world for the young generation.

‘We put the local MP Richard Drax on trial for benefitting from the proceeds of slavery because his family made all their money from that and we invited him to be the defendant but he didn’t come.

‘There were 40 pupils involved and they took on the roles of prosecution and defence lawyers, with the rest in three juries, and it was all filmed including their deliberations.

‘There were opening statements, and the prosecution outlined its case.

‘We had prosecution witnesses including a slavery expert and an expert on the medical consequences of the slave trade, while on the defence side there was a wealth manager who said it was legitimate to inherit wealth.

‘Mr Drax was invited to come to give a defence but declined, so there was a stand-in who responded how he thought he might.

‘The kids were actually very open-minded and poor Mr Drax got convicted on the charge of benefitting from the proceeds of slavery, but not on another charge.

‘The idea of this and the 3DCentre is to give young people opportunities to have the experience of human rights and to therefore get them excited about it.’

He claimed: ‘They really were, they were fabulous, They lasted eight hours without a yawn.’ 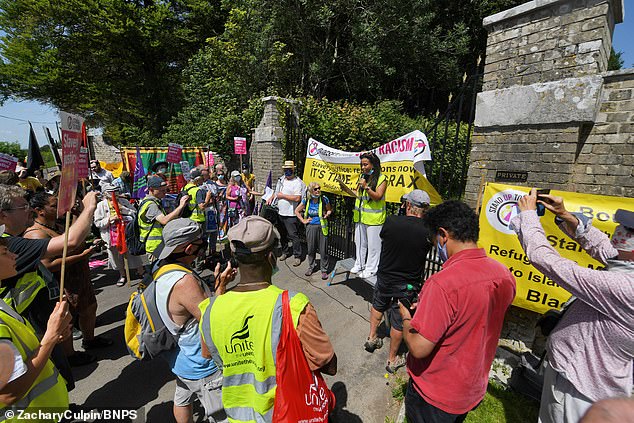 Drax Hall’s sugar plantation (pictured) in Saint George, Barbados, had a workforce of around 327 enslaved people for around 200 years

The Drax Arms in Bere Regis, Dorset, was targeted by vandals who sprayed the words ‘slaver’ and ‘BLM’ on to the walls.

The Grade II-listed pub is named after the Drax family who own the nearby estate and whose forefathers ran plantations in Barbados and Jamaica in the 17th century.

The Drax Arms in Bere Regis, Dorset, was targeted by vandals who sprayed the words ‘slaver’ and ‘BLM’ on to the walls

But the family, including Tory MP for South Dorset Richard Drax, no longer have any ties to the pub, which has been owned by brewery Hall and Woodhouse for a century.

Since 2017 it has been managed by tenant Kerry Davies and her family, who are gutted they have been vandalised ahead of their post-lockdown reopening in May.

Mr Stafford Smith added: ‘I think the younger generation should be angry because a lot of them don’t understand how their chances in life have been diminished by my generation.’

Dan Watts, the headteacher The Woodroffe School, said: ‘We are extremely proud of our students and their keen interest in the world beyond the school gates.

‘Our students have a strong moral compass, are passionate about exploring and debating the key issues that interest them since they recognise they have an important part to play in our society in the future.

‘A key role of all schools is, as stated by the Department for Education, that students should be encouraged to develop an interest in investigating moral and ethical issues and use this knowledge to support their own understanding, whilst respecting the views of others.

‘Furthermore, it is expected that whilst at school, students build their understanding of and respect for democracy and the rule of law, as well as their ability to recognise the difference between right and wrong, in both simple and more complex situations.

‘Clearly emphasised by the 3DCentre was the fact that this was an academic discussion and did not purport to be a real trial, but an educational process.

‘However, care was taken by the organisers to ensure that the arguments heard by our students were balanced.

‘The 3DCentre is planning future ‘Generation on Trial’ events on issues ranging from climate change, Brexit, student loans to UK immigration policy and we will continue to support our students in taking part in them.’

Mr Drax, 63, is believed to be the wealthiest landowner in the House of Commons, with 5,600 hectares of farmland and woodlands, and is worth about £150million.

He owns the Drax Hall sugar plantation in Barbados. His ancestors ran the same plantation about 400 years ago and used slave labour.

Mr Drax has previously described his ancestors links with the slave trade as ‘deeply regrettable’.

But he said no one can be held responsible today for what happened hundreds of years ago.

Mr Drax declined to comment on the mock trial.

It was built around 1650, around 20 years after James and William Drax first sailed to Barbados.

The Drax family owned slaves in Barbados from the mid-1600s and later expanded to Jamaica.

Drax Hall’s sugar plantation in Saint George, Barbados, had a workforce of around 327 enslaved people for nearly 200 years.

Richard Drax, 63, registered the plantation business in his full name and pays tax due on the property personally, after inheriting it when his father died in 2017.