A man who took his elderly mother on a boat trip on Port Phillip Bay to free her of “bad magic” contributed to her probable death, a coroner has found.

Adrian Meneveau, 56 and Felicity Loveday, 83, were last seen leaving a Frankston boat ramp in a small motorboat on December 11, 2019, and their vessel was found almost completely submerged near Beaumaris four days later. Their bodies have never been found. 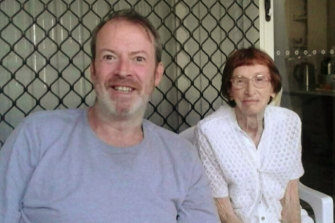 Mr Meneveau was his mother’s carer and planned to spend three days on Port Phillip Bay to rid her of the “bad magic” he believed she had gained spiritually through her devotion to the teachings of a Buddhist mystic, the Coroners Court of Victoria heard.

Mr Meneveau believed time spent on salt water would free his mother of the curse, the same way it did previously when Ms Loveday took a trip on the Dead Sea.

Coroner Audrey Jamieson on Monday found the pair had probably died and that Mr Meneveau contributed to his mother’s death because his boat wasn’t suitable for a trip of several days, and because Ms Loveday’s frail condition and dementia made her vulnerable.

A maritime expert found Mr Meneveau’s boat submerged as a result of a combination of rain and rough waves, or because of the water the boat took on through a small hole found in the deck. 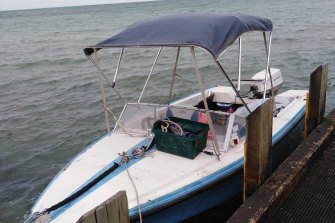 The boat Adrian Meneveau and his mother, Felicity Loveday, were last seen in.Credit:Facebook

Ms Jamieson couldn’t rule on when, where or how Mr Meneveau and Ms Loveday died, but said the son’s actions played a part in his mother’s death.

The coroner wrote: “I find that by taking his 83-year-old mother out on Port Phillip Bay in a vessel not suited to this purpose in light of the intended duration of his voyage, and having researched the weather forecast for that period … Mr Meneveau’s conduct contributed to [her] disappearance and death, as the weight of the available evidence indicates that Felicity Ruth Loveday was rendered vulnerable and helpless by her disabilities and her dementia.”

Ms Jamieson said while there was insufficient evidence to rule that Mr Meneveau intentionally killed himself and his mother, the possibility could not be discounted.

The life jackets they were seen wearing as they embarked on their trip were found in the wreckage of the boat, and Mr Meneveau had his personal affairs in order beforehand, including having drafted a will, paying his rent in advance and providing his sister with his bank account details.

Mr Meneveau had a history of mental health problems and alcohol dependency, the coroner wrote, but never spoke of ending his life or his mother’s. He also followed the same spiritual beliefs his mother did.

Ms Jamieson found Ms Loveday might have been incapable of taking her life jacket off.