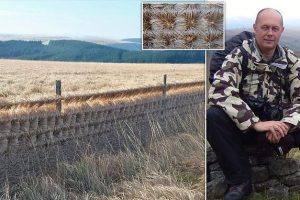 Is this for REAL? Storm Arwen creates ‘unbelievable’ masterpiece after winds blast moorland grasses so hard they WEAVE themselves around a 130m fence leaving admirers believing ‘waffle’ design was handmade

Storm Arwen has created a ‘masterpiece’ among its trail of devastation – by blasting tonnes of grass so hard the blades wove themselves so perfectly onto a fence that passers-by thought it was handmade.

Landscape photographer Colin Richards braved the weather on November 28 to walk up Mynydd Pwll-yr-Iwrch, south Wales, when he came across an ‘unbelievable’ sight stretching across 130 metres of fencing.

Incredible photos taken by the father-of-one on the hill summit show the brown moor grass completely entwined in the barbed wire structure.

The moor grass, molinia, was uprooted by strong northerly winds and wrapped itself around the entire fence, creating an illusion it had been handwoven. 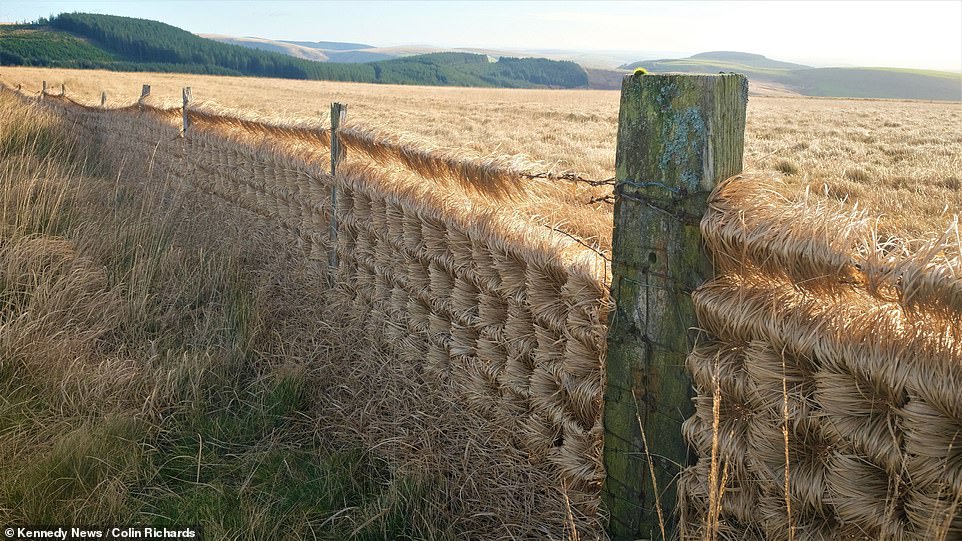 Among its trail of devastation, Storm Arwen created a ‘masterpiece’ by blasting tonnes of molinia grass so hard that the blades wove themselves into the barbed wire fence 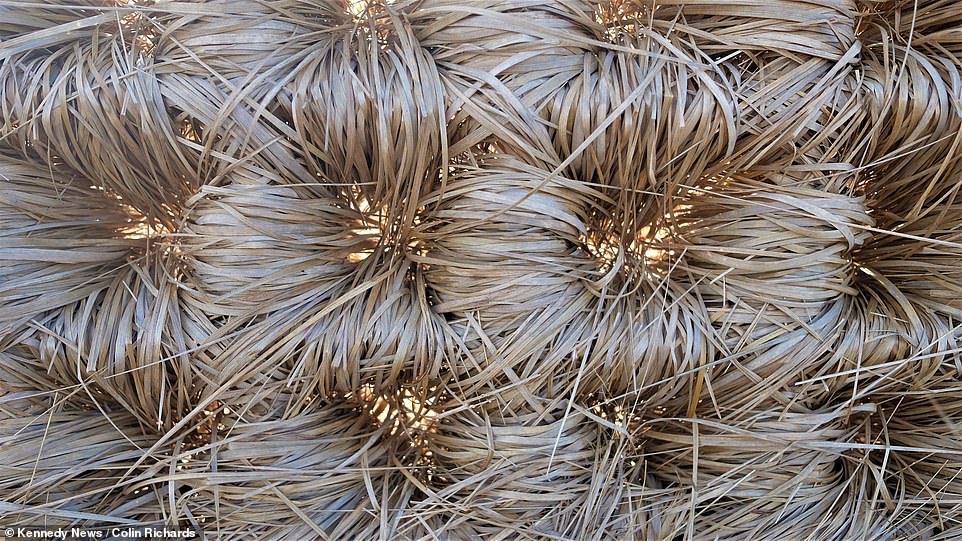 The blades of grass created an illusion that it had been handwoven into the barbed wire structure. It has now been branded as the ‘best fence ever’

The home carer shared his images online where they have amassed just under 9,000, comments and shares.

Dubbed as the ‘waffle fence’ by admirers online, Mr Richards, of Maesteg, Bridgend County Borough in south Wales, said: ‘It looks man-made but if you had a look at that you’d be up there for years.

‘Everyone seems to like them and some people are not convinced that it’s natural.’

Mr Richards said he has seen it happen twice up in the Rhondda Valley a few years ago, but explained it wasn’t from a storm like Arwen and so the winds were not strong enough to create a well-defined structure. 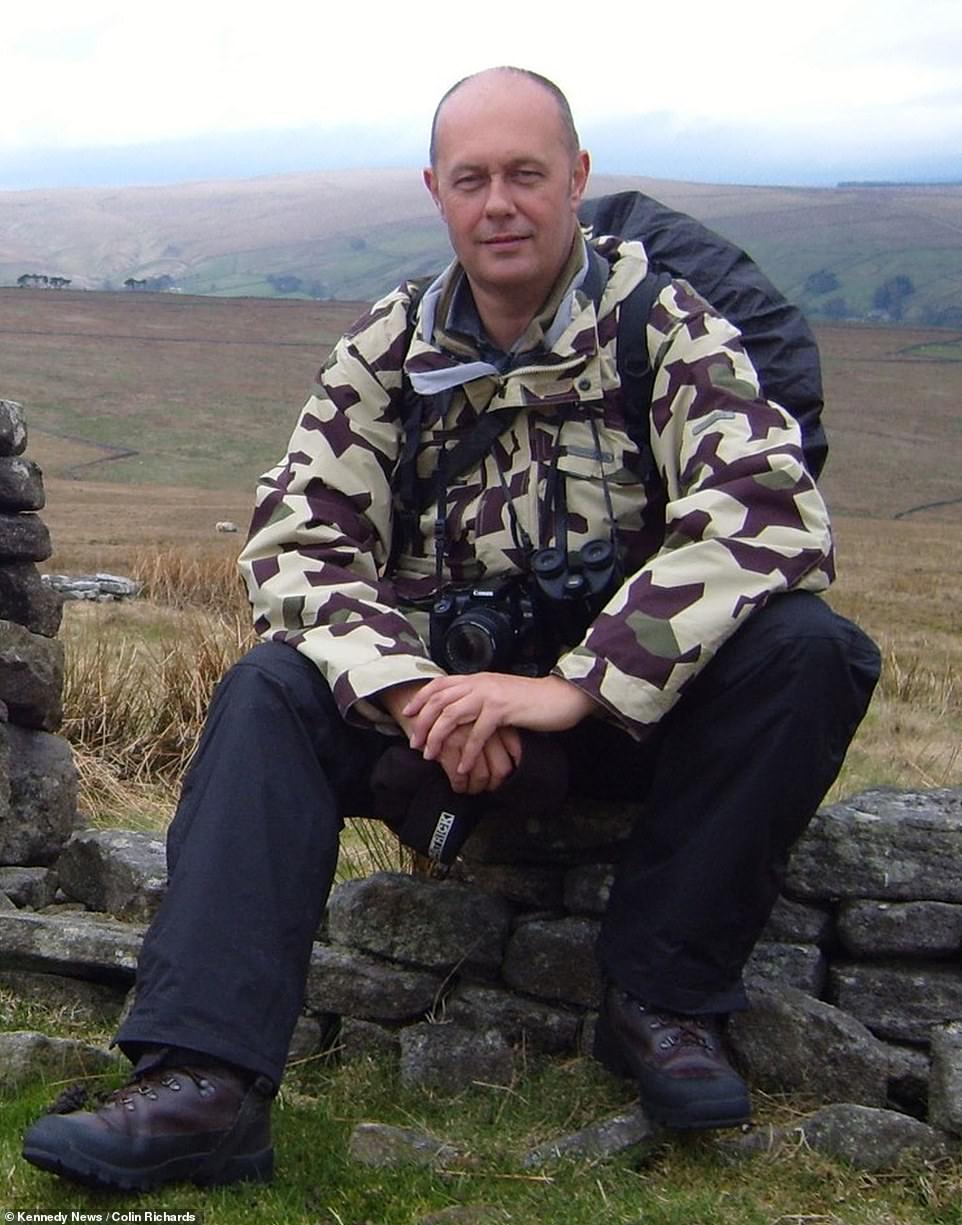 Colin Richards, 61, from Maesteg, Bridgend, Wales, captured the photographs of the fence as he braved the hill summit during Storm Arwen last Sunday

He continued: ‘With the northerly winds coming off all the other hills it picked up tonnes of grass and the only thing in its way was this fence.

‘When I nipped over this gate and looked up the line of the fence and saw what a lot of people are calling ‘waffles’ or ‘the waffle fence’.

‘Every blade of grass has wrapped itself around posts, barbed wire and the panels of the fence itself.

‘It just looks like someone has woven it by hand.

The amateur photographer said he’s been visiting this particular hill in Maesteg since the age of 10 and that the galeforce winds had also pulled around three posts completely from the ground.’ 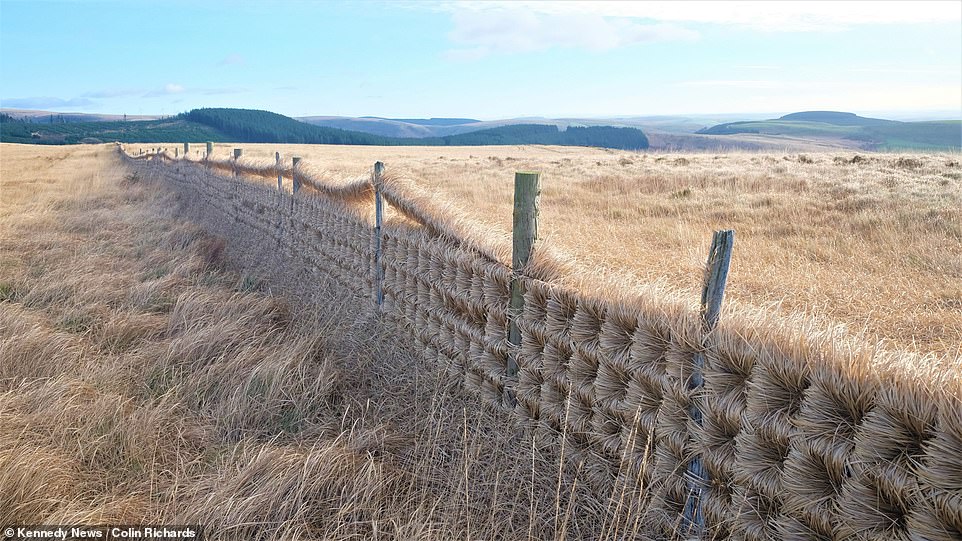 Mr Richards said he has seen it happen twice up in the Rhondda Valley, south Wales, a few years ago, but explained it wasn’t from a storm like Arwen so the structure was not as well defined 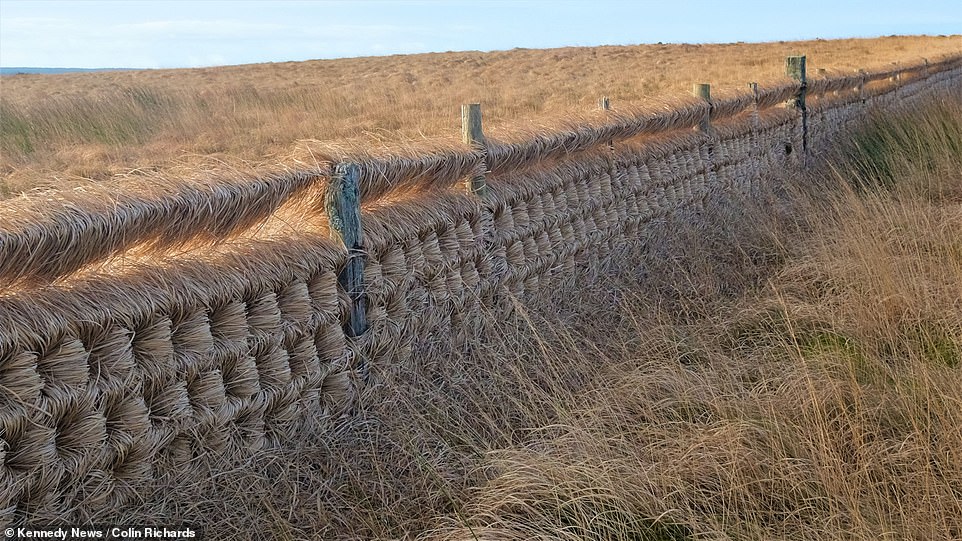 The fascinating sight stretches over 130 metres of fencing in Mynydd Pwll-yr-lwrch, south Wales

Explaining how the fence came to look this striking, the 61-year-old photographer said: ‘Where you can see each panel as it were and the grass is woven around, it was more or less caught up on the fence and the barbed wire strand on the top.’

‘This grass is deciduous so in the winter it dies back and lays on the ground until a big storm or high winds whip it up and it goes across the mountainside and hits anything.

‘Whatever it comes to, it’s going to cling onto.

‘There’s inches and inches of dead grass. There’s acres of it on the north side and when the wind [northerly] comes and hits it there’s only one place it’s going to go, into that fence.’

The photographer of 40 years uploaded his photographs onto Facebook and said he ‘couldn’t believe’ the response he received as they’d been shared more than 5,500 times.

Adrian Guest commented: ‘So that’s how they grow Shreddies! I always thought they were knitted.’ 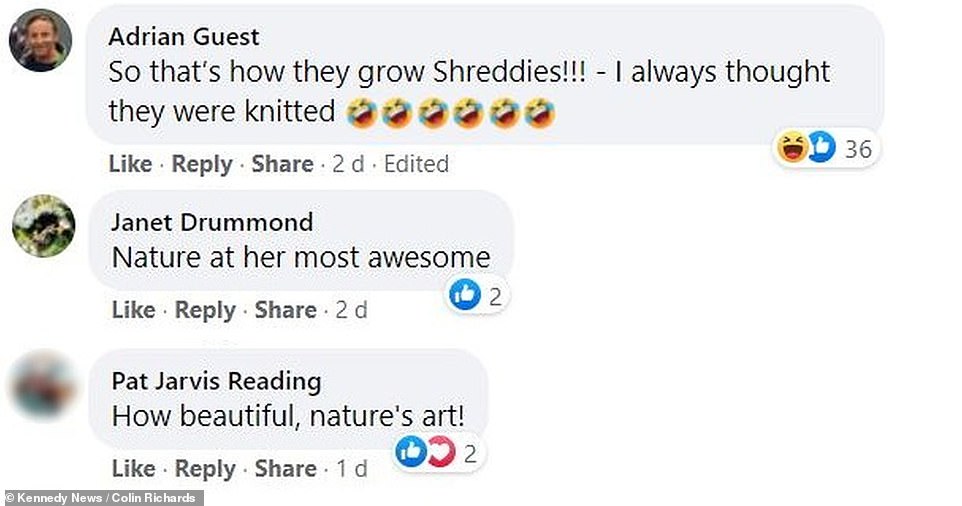 Users on Facebook were amazed by the images shared by Mr Richards, which he posted on The Natural Beauty of Maesteg Group

The images got quite the reaction online, with users astonished by the natural forces creating a ‘piece of art’

Andrew Edwards said: ‘What nature can do to a man made structure, amazing.’

The images have gone further online, with Twitter users fascinated by the natural piece of art.

People online were understandably baffled by how this could happen, and how long it may last before going back to normal.

But user @ExmoorwithJack suggested: ‘I suppose it will stay until a wind blowing the other way removes it.’