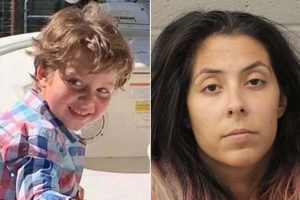 Houston boy died weeks before he was reported missing: report

The woman arrested in the disappearance of a 5-year-old Houston boy will likely face additional charges, a prosecutor said — as a judge also increased her bond in her first court appearance.

Theresa Balboa, 29, the girlfriend of Samuel Olson’s father, Dalton, has been charged with tampering with evidence, a human corpse, in the boy’s death.

She said a murder or a capital murder probe is pending in the case.

In addition, Balboa has also been charged with assault for allegedly choking Samuel in November.

During the Monday court appearance, State District Judge DaSean Jones increased her bond from $5,000 to $100,000 in the assault case.

Balboa, who also is being held on a $500,000 bond for the tampering charge, did not speak during the brief court hearing.

The Harris County Institute of Forensic Sciences has not officially identified the body found last week by authorities as being Samuel.

But investigators have said they believe the body found inside a plastic box at a Best Western in Jasper, about 135 miles northeast of Houston, is the boy.

Initially, Balboa accused Samuel’s mother and a man who presented himself as a cop of taking the boy.

Samuel had been living with Balboa since April 30, according to the outlet. But authorities have not said why the child was staying with Balboa. His dad lived at a different address.

A cause of death has not been determined.