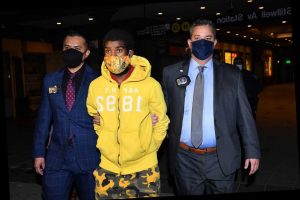 A homeless man charged with a slew of violent attacks on women in the Big Apple was ordered held on $100,000 bail late Wednesday.

Khari Covington, 29, was slammed with dozens of charges at his arraignment in Brooklyn criminal court for nine assaults dating to Aug. 5 — telling detectives he targeted the women because they were light-skinned, according to a criminal complaint.

Most of the attacks took place at a Brooklyn subway station, but at least two — including the beating of a woman at a Wilson Avenue smoke shop Monday — were above ground.

In that caught-on-video attack, Covington is charged with going behind the counter at the Sunflower Glass Company shop and pummeled Tina Francisco, who tried in vain to fend him off.

“I was very scared,” Francisco, 27, told The Post on Wednesday. “I guess I put up a fight but it didn’t feel like it at the time.”

Francisco said she grabbed a pair of dull scissors to fight off her attacker.

In all of the attacks, including two other earlier this month, Covington allegedly approached the women and punched them without warning, the complaint said.

He is charged with third-degree assault as a hate crime in all the cases, plus additional charges that include harassment, menacing and burglary.

He was also charged with second-degree strangulation in the attack on Francisco.