Home » World News » The REAL death in paradise: Story of bizarre death that inspired it

The REAL death in paradise: Story of bizarre death that inspired it 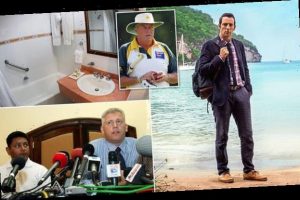 The REAL death in paradise: As the hit detective show returns, there’s one tropical mystery it hasn’t solved – the haunting story of the bizarre death (and the British bobby) that inspired it

Rumpled, irritable and dripping sweat under the hot Caribbean sun, Ralf Little returns tonight as the British detective stranded far from home on the fictional isle of Saint Marie, in Death In Paradise.

Little, who plays DI Neville Parker, always catches the killer. Indeed, no crime has ever gone unsolved in this intricately plotted series, which is perhaps why critics have tended to turn up their noses at it — and why, now ten years old, it is still one of the BBC’s most popular dramas.

But the death in the Caribbean that remains a mystery to this day — surrounded by a swirl of rumours that suggest at least six possible solutions and four motives for murder — is the one that happened in real life and inspired both the show and its central character.

Former England cricket player and renowned international coach Bob Woolmer was found dead in his hotel bathroom in Jamaica, the morning after the most disastrous match of his life, in March 2007. And the man assigned to unravel the truth was a gangling former Scotland Yard superintendent who, sweltering in his suit and tie, looked to the press like the world’s most unlikely policeman. 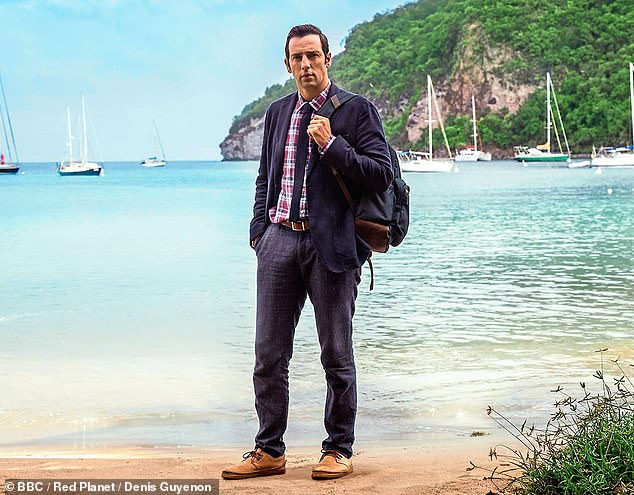 Rumpled, irritable and dripping sweat under the hot Caribbean sun, Ralf Little (pictured) returns tonight as the British detective stranded far from home on the fictional isle of Saint Marie, in Death In Paradise

Woolmer’s naked body was discovered on the white-tiled floor of his bathroom in room 374, on the 12th floor of the Pegasus hotel in Kingston, the island’s capital. He had been dead for hours.

As the news rippled through the enclave of international cricketers in Jamaica for the World Cup, the initial assumption for many was that the 58-year-old had killed himself.

On the day before his death, Saturday March 17, Woolmer watched his Pakistan team crash to an astonishing defeat against Ireland, the rank outsiders.

Before the match, the Pakistanis had been 20-1 odds-on to win and go through to the second round. Instead, they lost by three wickets and were eliminated.

This was perhaps the biggest upset in the history of international cricket. And it surely signalled the end of Woolmer’s career, not just as the Pakistan coach but in the game’s top flight for ever.

It was a personal humiliation for the man dubbed The Scientist by cricket fans, on account of his encyclopaedic knowledge and innovative ideas.

On the streets in Pakistan, as the defeat unfolded, angry crowds burned effigies of the Englishman and chanted ‘Death to Woolmer’. At the post-match Press conference, a journalist demanded to know if he was going to resign. ‘I’d like to sleep on that one,’ he replied.

A waitress who brought Woolmer his last meal in his room told reporters that he looked broken when she placed the food on his table. ‘His eyes were red, like somebody who had been crying,’ she said. 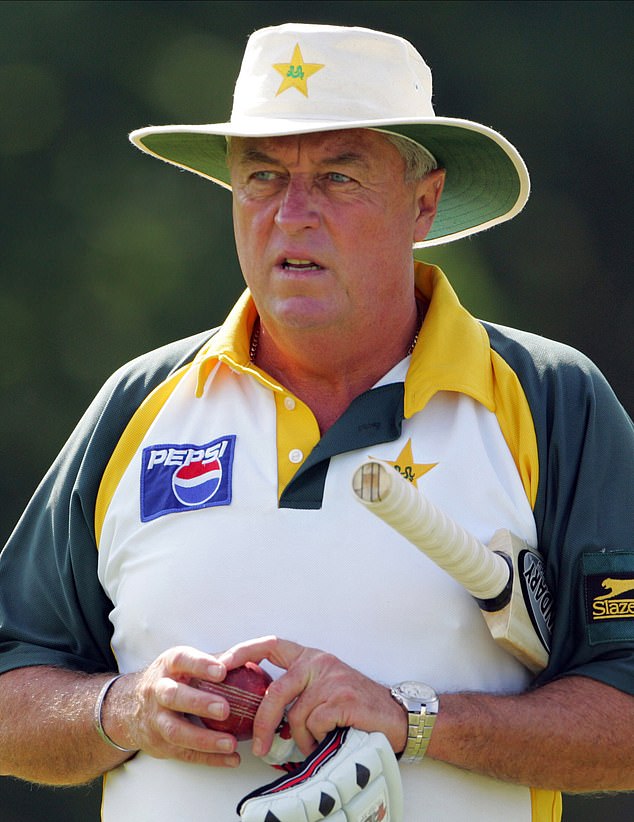 Former England cricket player and renowned international coach Bob Woolmer (pictured) was found dead in his hotel bathroom in Jamaica, the morning after the most disastrous match of his life, in March 2007

Woolmer’s career on the world stage, which stretched back 35 years, had long been dogged by scandal.

In the early 1970s, he received a three-year ban from the England squad after defying the sports boycott on South Africa, and joining a cricket tour in spite of the country’s apartheid regime.

In the late 1990s he was in South Africa again, as the national coach, when the team captain, Hansie Cronje, was implicated in a match-fixing scandal.

Cronje took bribes from betting syndicates, to change the course of matches.

Woolmer, an affable and sometimes naive personality, said he could not believe that Cronje was capable of such criminal behaviour, and defended him robustly. Now, with his body in the Kingston morgue, seasoned sports journalists suggested the Englishman could not face the thought of another shameful inquiry into alleged cheating. But then the pathologist, Dr Ere Seshaiah, examined the body. What he found turned the inquiry, and the cricket world, on its head.

The hyoid bone in Woolmer’s neck was broken — a clear sign that he had been strangled. At this point, Jamaica’s Deputy Police Commissioner [DPC] called a press briefing. 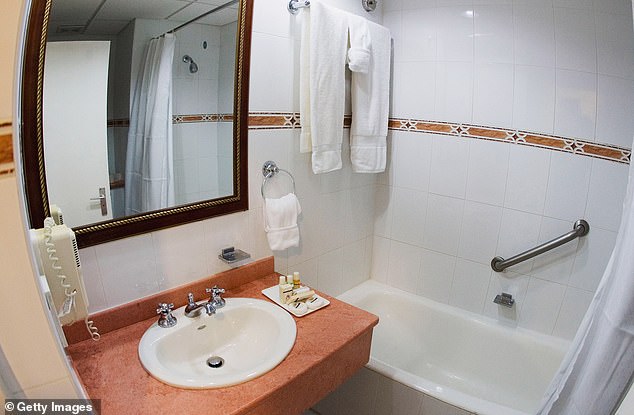 Woolmer’s naked body was discovered on the white-tiled floor of his bathroom in room 374, on the 12th floor of the Pegasus hotel in Kingston, the island’s capital. He had been dead for hours. Pictured: A general view of a guest bathroom at the Pegasus Hotel in Jamaica

DPC Mark Shields, 6 ft 6 in tall and 50 years old, had spent three decades at Scotland Yard and City of London police. An anti-terrorism specialist, he had also investigated a £5 million ransom plot to kidnap Victoria Beckham in 2002.

After arriving in the Caribbean two years earlier to probe the killing of four civilians by Jamaican police, Shields made his home on the island.

Now he was expected to uncover the truth behind a death in extraordinary circumstances, while dozens of reporters breathed down his neck. Shields quickly established that, broken neck or not, Woolmer had not committed suicide.

Almost the last thing he did was to send a chatty email to his adored wife Gill in Cape Town — sounding baffled and frustrated at his team’s performance, but certainly not depressed. One of his players, the wicketkeeper Shoaib Malik, came forward to say he shared a lift up to the 12th floor with Woolmer that evening.

They rode in silence — there wasn’t much to say — but as the doors opened, Woolmer managed one of his customary jokes. Waving Malik through the doors, he said, ‘Ladies first!’ Yet all Shields’s experience told him Woolmer had not been strangled either.

There was no sign of a struggle — no cuts and bruises on the body, no overturned furniture. 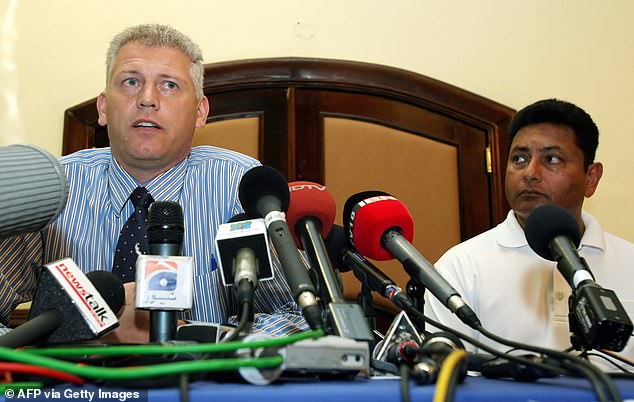 The hyoid bone in Woolmer’s neck was broken — a clear sign that he had been strangled. At this point, Jamaica’s Deputy Police Commissioner [DPC] (left) called a press briefing

Even that last meal was still where the coach had left it: a half-eaten lasagne and an empty bottle of champagne.

Woolmer was a big man, 6 ft and heavy-set. It seemed unlikely that an assailant, even one he knew who took him unawares, could have killed him without a fight.

And then there was the scene in the bathroom, with vomit across the walls and blood in Woolmer’s mouth. Could that point to poison?

The pathologist looked again and discovered traces of insecticide in the stomach.

Now the theories began to make sense: if Woolmer was already semi-conscious from poisoning, he might have been overpowered more easily. Four possible motives were present. Pakistan’s obsessive fans, already chanting for his head, blamed Woolmer for their team’s unbelievable collapse. Did one or more decide to take revenge?

More probable was some connection with the betting syndicates and organised crime. If Woolmer was about to denounce his players to the police for taking bribes, perhaps a Mafia hitman was sent to silence him.

Or could it have been one of the players, desperate to stop Woolmer from exposing them as criminals and cheats? Many thought it possible.

As the team captain, manager and assistant coach boarded their plane to leave Jamaica, reporters shouted: ‘Did you kill Woolmer?’

And then there was the most unsettling question of all: was Woolmer killed by a religious fundamentalist? Almost all his players were devout Muslims, and he had criticised them privately for ‘being more interested in praying than playing’. They, in turn, were unhappy at his open lack of religious faith.

But then, incredibly, the Jamaican authorities announced that Woolmer had died from natural causes — and all this speculation fell apart.

They had asked three experts — one in the UK, the others in Canada and South Africa — to examine photographs and X-rays of the hyoid bone. Each of them declared it was not broken after all. And the poison in his stomach? Allegedly, that came from a can of fly spray, squirted in the morgue during the post-mortem.

Woolmer was diabetic, with an enlarged heart. He was given to coughing fits after eating rich food. The lasagne, not an assassin, killed him. Initially unsure, Shields came to accept this explanation. One crucial fact, he believed, was that Woolmer was slumped with his back to the bathroom door when he was found — making it more likely that he died alone.

Today, Shields is a security consultant, offering advice to Caribbean visitors on keeping themselves and their valuables safe from robbers.

Unable to make any sense of the conflicting evidence, the Jamaican coroner’s jury returned an open verdict.

When TV writer Robert Thorogood read about the case, he was inspired to create a whole series, basing DI Neville Parker on Shields. But this is one death in paradise where the whole truth will probably never be known.

Death In Paradise returns tonight on BBC One at 9pm.