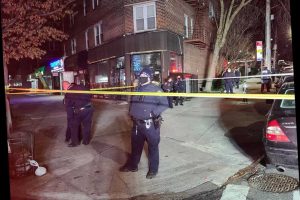 One person was killed and two others injured during a shooting at a hotel in Queens on Friday morning, sources said.

The shooting took place at the Umbrella Hotel in Kew Gardens at around 1 a.m., according to police sources.

Three males were stuck by gunfire during a gathering outside the building.

All three victims were taken to Queens General Hospital where one died from his injuries. The other two were being treated for their wounds.

Their ages were not available early Friday.

Police were searching for a suspect. The shooting death is believed to be the first homicide of 2021.