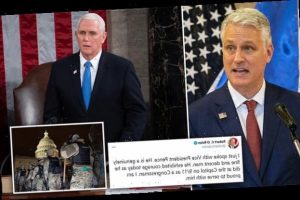 The praise for Pence, which was not otherwise explained, came as President Donald Trump issued bizarre statements asking a mob of supporters who invaded the Capitol to remain ‘peaceful’ while also continuing to claim his election loss was rigged.

‘I just spoke with Vice President Pence. He is a genuinely fine and decent man. He exhibited courage today as he did at the Capitol on 9/11 as a Congressman. I am proud to serve with him,’ wrote O’Brien. 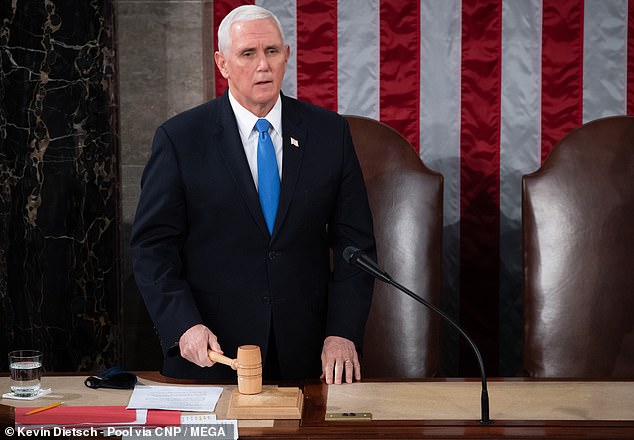 O’Brien’s praise of Pence came after Trump attacked ‘weak’ Republicans who refused to back his election fraud claims and overturn the election result.

His reference to the Sept. 11th, 2001 attacks recalled another attack on symbols of U.S. power – and an attack officials believe was planned for the Capitol itself.

Trump has demanded Pence not recognize electors in states that voted for Joe Biden where Trump is asserting massive fraud without evidence.

‘Mike Pence is going to have to come through for us, and if he doesn’t that will be a sad day for our country because you’re sworn to uphold our Constitution,’ Trump said while asking a crowd of supporters to march to the Capitol.

‘If Mike Pence does the right thing, we win the election,’ Trump, said Wednesday morning, amping up pressure. 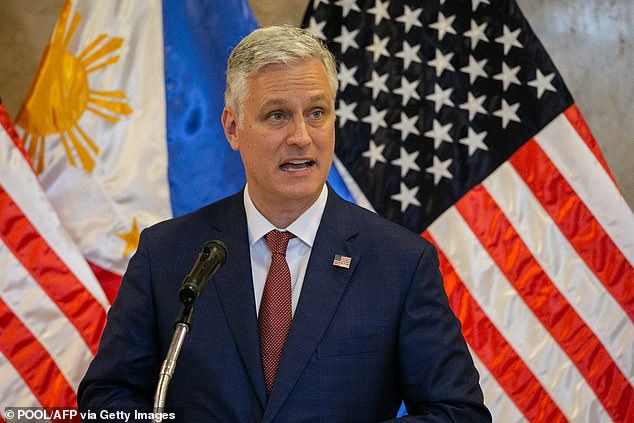 ‘I just spoke with Vice President Pence. He is a genuinely fine and decent man. He exhibited courage today as he did at the Capitol on 9/11 as a Congressman. I am proud to serve with him,’ wrote O’Brien 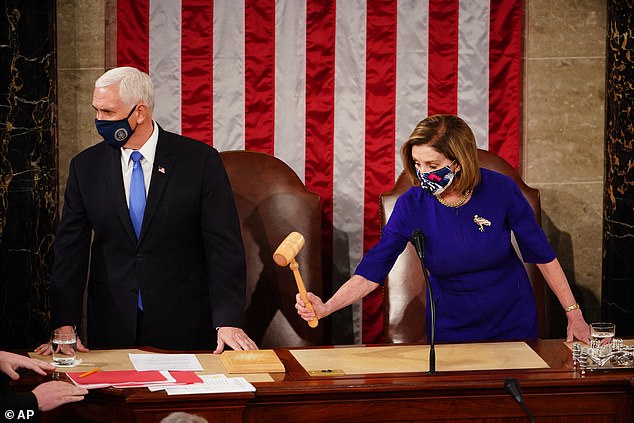 Speaker of the House Nancy Pelosi, D-Calif., and Vice President Mike Pence officiate as a joint session of the House and Senate convenes to confirm the Electoral College votes cast in November’s election, at the Capitol in Washington, Wednesday, Jan. 6, 2021 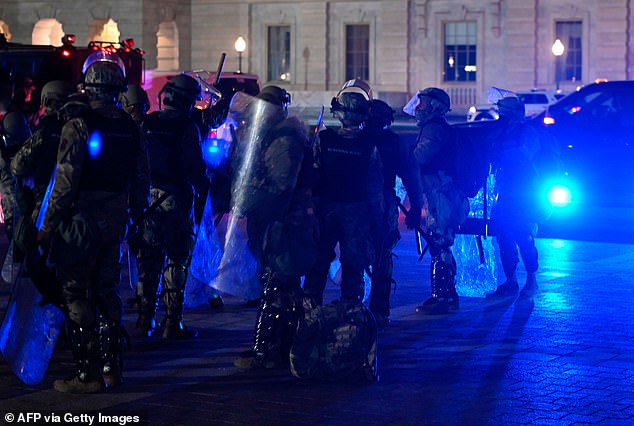 Donald Trump’s supporters stormed a session of Congress held today, January 6, to certify Joe Biden’s election win, triggering unprecedented chaos and violence at the heart of American democracy and accusations the president was attempting a coup 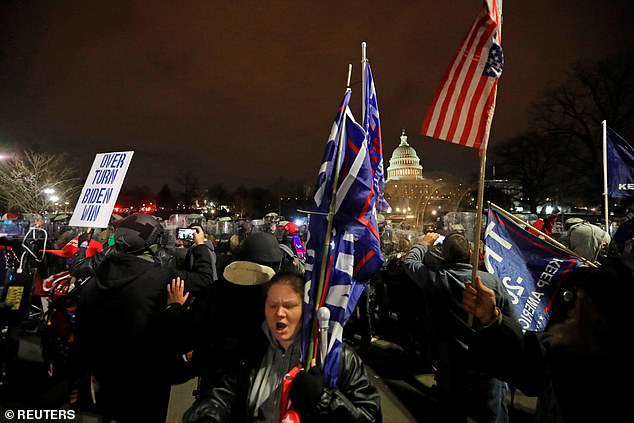 Supporters of U.S. President Donald Trump gather near the U.S. Capitol during a protest against the certification of the 2020 U.S

But he also demonstrated he doesn’t understand Pence’s role in presiding over the session, which is largely ceremonial.

‘All Vice President Pence has to do is send it back to the states to recertify and we become president,’ Trump claimed, which is false. Pence doesn’t have that power and such a move would not give Trump a victory.

A group would eventually bust through windows and run wild through the building.

U.S. Capitol Police were unable to restore order and it wasn’t until late Wednesday afternoon that it was announced National Guard forces would be positioned at the Capitol.

In an odd statement, acting Pentagon chief Christopher Miller – installed by Trump after he pushed out Defense Secretary Mark Esper after the election – said he had spoken to Pence – not Trump – about calling in the Guard.

“Chairman Milley and I just spoke separately with the Vice President and with Speaker Pelosi, Leader McConnell, Senator Schumer and Representative Hoyer about the situation at the U.S. Capitol,’ Mark Milley said in a statement, referencing the chairman of the joint chiefs of staff and congressional leaders.

‘We have fully activated the D.C. National Guard to assist federal and local law enforcement as they work to peacefully address the situation. We are prepared to provide additional support as necessary and appropriate as requested by local authorities. Our people are sworn to defend the constitution and our democratic form of government and they will act accordingly.’

It was not immediately clear why the Pentagon boss would speak to Pence, rather than Trump, the commander in chief, about the decision to activate the Guard.

Pence previously served as a member of the House Republican leadership before becoming governor of Indiana. Trump backers who broke into the building and defied a security lockdown and screening busted into congressional offices and penetrated the chamber where he previously served. 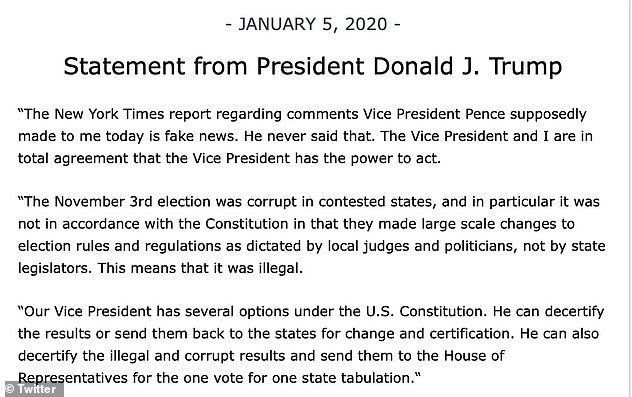 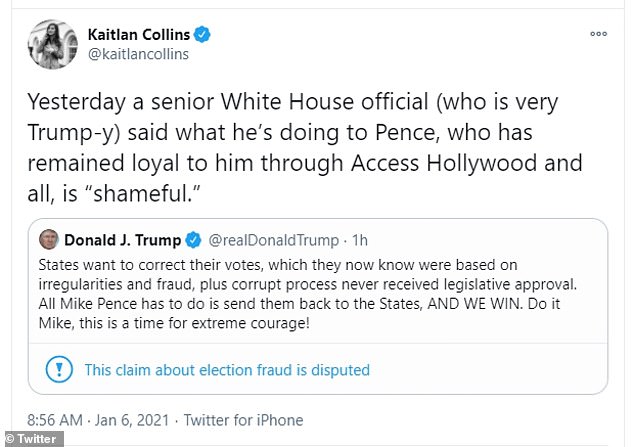 He described his 9/11 experience during a 2018 speech at the Pentagon on the anniversary of those attacks.

‘As a new member of Congress, I was going about my normal workday routine just across the river, on Capitol Hill, when I learned of the attacks in New York City. And I’ll never forget the moment, standing in my office, when I heard a staffer shout, “The Pentagon’s been hit,” Pence said.

‘But when I made my way out of the building and walked on to the Capitol grounds, I’ll never forget the sight of seeing columns of mud-brown and black smoke billowing out of the Pentagon, literally darkening half of that crystal-clear blue sky.’

Rep. Adam Smith (D-Calif.), the Armed Services Committee Chairman in the House, said he also spoke to Miller and Milley.

He also indicated Trump was out of the loop on the decision as far as he knew.

‘Fortunately, all of those people decided they needed to bring security to the situation,’ he said.

‘The one saving grace in all of this is that the president has abdicated his job. As near as I can tell he wasn’t on the phone to these same people,’ said Smith.

‘And here’s the scary part about it. That’s reassuring to me. Because if the president was involved in that chain, Number One I don’t trust that he wouldn’t use the situation to seize power,’ he continued.