Home » World News » UK Covid cases pass 50,000 in one day for the first time since mid-January as another 49 people die

UK Covid cases pass 50,000 in one day for the first time since mid-January as another 49 people die 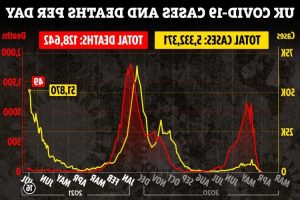 DAILY Covid cases have today passed the 50,000 mark for the first time since mid-January – with a further 49 deaths recorded. 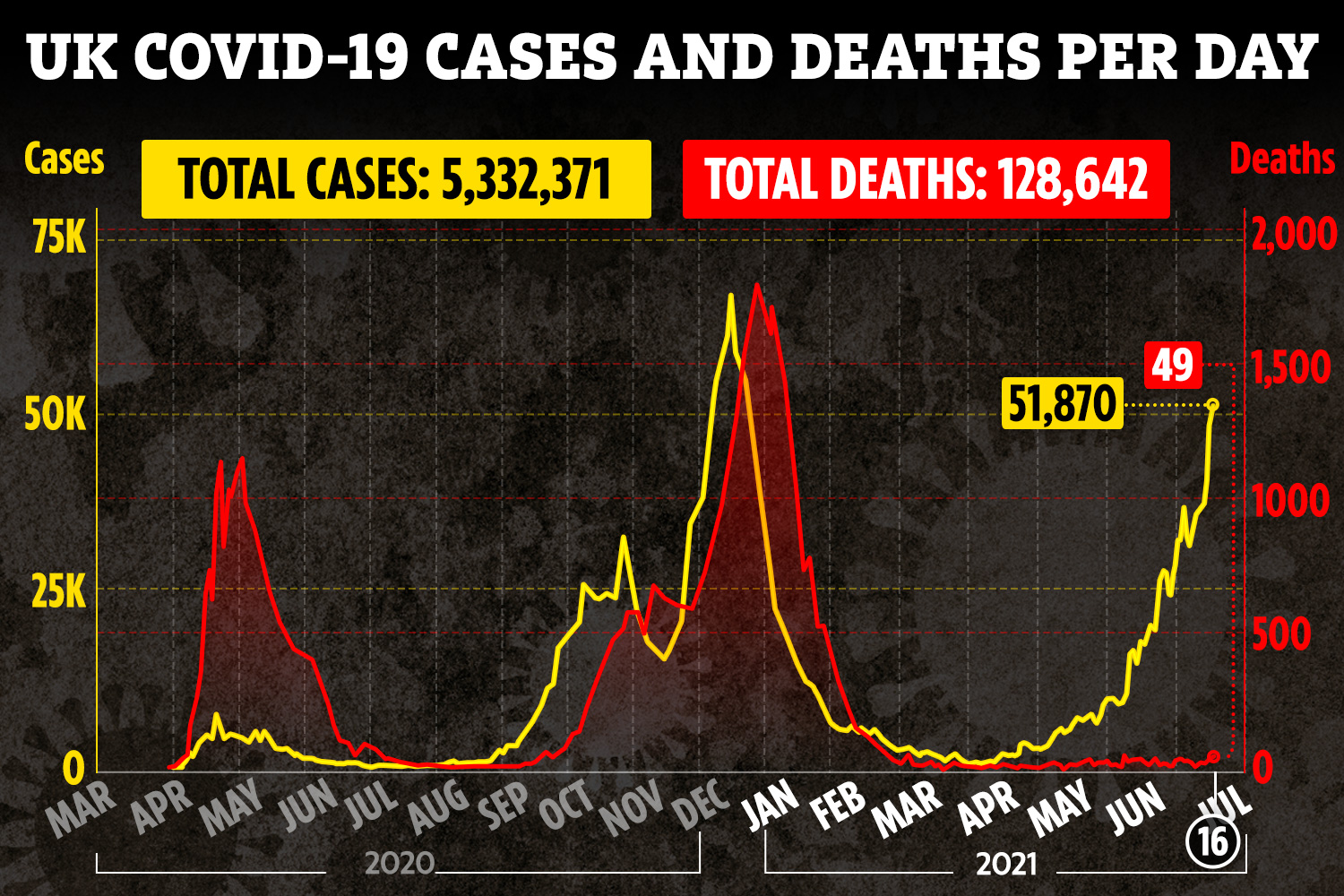 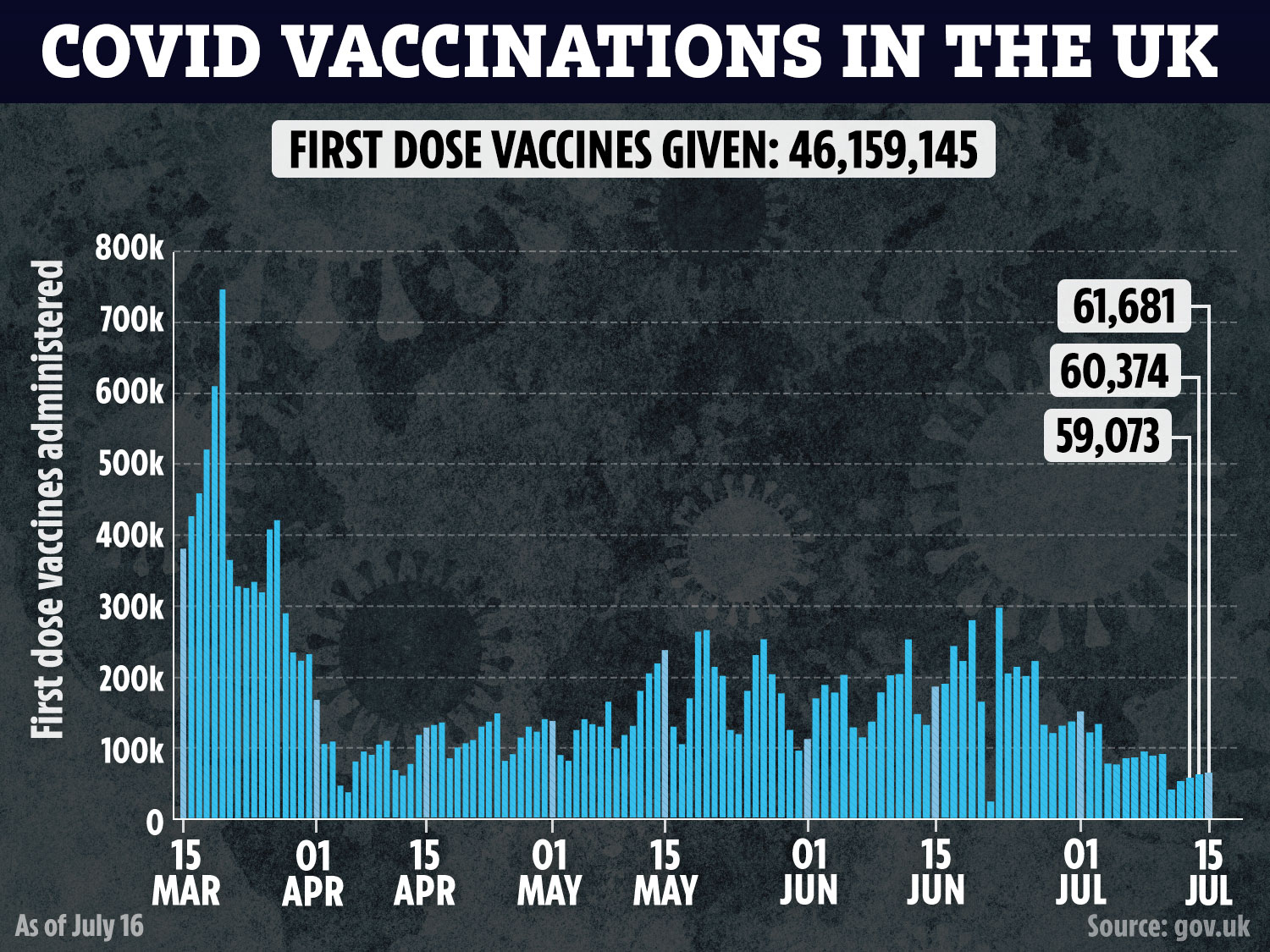 Today's rise in deaths brings the total since the start of the pandemic to 128,642.

It is lower than the 63 reported yesterday – but much higher than the 29 recorded last week.

Meanwhile, today's infections are the highest since January 15 when the UK was in lockdown. They are also up on yesterday's figure of 48,553.

A further 717 hospitalisations were reported – the highest figure since March 2.

And 61,681 Brits received their first dose of the jab yesterday, bringing the total to 46,159,145. Over 35 million people are now double-vaccinated.

The figures come just three days before 'Freedom Day' when all legal Covid restrictions are lifted.

Ministers are reluctant to delay the unlocking again after already extending restrictions for four weeks past the original June 21 waypoint.

Instead the government will rely on Brits on voluntary compliance with mask wearing and the use of vaccine passports.

But concern over the rapid spread of the Delta variant is mounting and yesterday 63 deaths were recorded – the highest since March.

There are also fears that the vaccine rollout has slowed amid reluctance among younger Brits to take the jab.

Boris Johnson has begged Brits not to go wild and take the lifting of lockdown as an excuse to "have a great jubilee" next week.

And yesterday top medic Chris Whitty warned the number of people in hospital with coronavirus could reach "quite scary" levels within weeks.

Meanwhile, one of England's largest hospitals today cancelled all its planned operations for 48 hours due to a lack of beds in intensive care amid a concerning rise in Covid admissions.

The hospital, which has more than 1,100 beds, has put dozens of procedures scheduled on hold – including lifesaving liver transplants.

It is so busy that its intensive care unit, one of the largest in Europe, was completely full on Thursday, with 10 patients in the wider hospital on a critical care bed 'watch list'.

Elsewhere the R rate – the rate of infection – rose to as high as 1.6 in some areas of England, it emerged today.

One in 95 people in England had the virus in the week to July 10, according to the Office for National Statistics (ONS).

It’s up from one in 160 reported the previous week.

Rates have increased for all groups but are highest in those aged between year 12 and 24 years old – at one in 35.