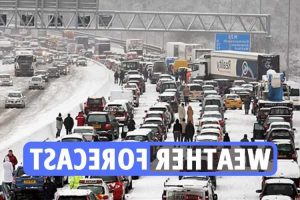 THE MET Office have put out two yellow ice warnings across the UK that will remain in place until tomorrow.

The Met Office said Brits should be prepared for an icy Friday night before a chilly weekend.

The forecaster warned there will probably be icy patches forming on some untreated roads, pavements and cycle paths.

“Clear spells for a time will allow ice to form in places, particularly for evening commuters, before temperatures trend up after midnight.

Read our weather live blog for the latest news and forecasts