Mick and Eileen raised their five sons and daughter in the cold and harsh environs of Trentham in the beautiful old farmhouse set on the hill. As a baby, Frank developed poliomyelitis, infantile paralysis. His practical and no-nonsense mother investigated all avenues to ensure he was given the best care. This involved going to live in Sydney at age five, without family, to be treated by the renowned Sister Elizabeth Kenny. It has been suggested that he may be one of Australia’s oldest survivors of polio.

Ultimately, Frank learnt to walk, albeit with a metal splint and walking stick. For many years he regaled his children with stories of his riding a bike through the snow on one leg to school in Kyneton, 10 kilometres away.

Being unable to help on the farm with the physical work, he took up the saxophone. He has derived great enjoyment from music throughout his life and loved nothing more than being asked to play, whether it be in a friend’s lounge room or the Victorian Bar dinner. A great source of pride was the edition of the Bar News with his resplendent, white-suited figure on the front cover, saxophone ashine.

Frank began secondary school at Marist College Kyneton in 1942 until leaving certificate and then went to complete matriculation in 1948 at St Pat’s Ballarat as a boarder. A sports-oriented school, Frank, unable to play, became the analyst of the football team and earnt the respect of the players with his thoughtful observations. He continued his love of footy through watching his beloved Essendon, especially through the 1980s when son-in-law Frank Dunell featured in the 1984 grand final victory, going on to be the only County Court judge to ever don a grand final medal while sitting on the bench. Many of his twilight years were enhanced, wiling away the hours watching the Bombers on television.

An excellent scholar, he excelled in French and literature and went on to study law at the University of Melbourne, graduating with honours in 1954. Frank lived at Salesian-run Don Bosco in Sydney Road, Brunswick, and remained faithful to the Salesians throughout his life, heavily involved in the Eucharistic Congress of 1972 and papal tour of 1986. And, while working on his memoir Splints to Silk in early retirement, he regularly attended the Salesian office to help out. He was a man of great faith.

Frank became the pride and joy of his mother when, unable to spud farm, he graduated law. About this time, he met Mary Bernadette Busch. He couldn’t believe his luck, and they married in 1961 and went on to have five sons and four daughters. Frank loved Mary and his family dearly and thrived on the business of cheering on children and grandchildren in football, cricket, netball, music, plays, and many other activities. He taught the family to fish at the Barwon Heads beach house, make a fire at his beloved Howqua shack, cook raspberry coconut slice and prune roses at home.

Frank loved the law and worked tirelessly till his enforced retirement at 75. In his 70s, he had a period of receiving radiotherapy before going on to work, never missing a day. He worked as a barrister until he was appointed silk, QC, in 1977 when, at his welcome, his nine children, wife Mary and his mother-in-law sat in an almost full jury box. 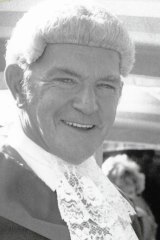 At this and his later welcome as a County Court judge in 1982, many were astounded to hear the number of committees and involvements Frank had, from long-term member of the Bar Council, member of the law reform and ethics committees to the St Columba’s College and Tobin Brothers boards, to organiser of the St Vincent’s parish gymkhana, member of the Strathmore Football Club committee and national president of the Knights of the Southern Cross. This involvement in law, community and sport ultimately manifested in the proud honour of AM in the Queen’s Birthday honours of 2004 “for services to the judiciary and the administration of justice in Victoria and to the community through a range of church, social support, youth and sporting organisations”.

Frank was proud of his family and would regale any unsuspecting lawyer with anecdotes over lunch at the Owen Dixon dining room at the Essoign Club, which he established. His son, Matthew, opened Walsh Chambers, Geelong, in his honour. He was best loved for his qualities of humanity, humility and undying drive and positivity. Ever the glass half-full optimist, he would rival Daryl Kerrigan in the pool-room stakes.

Always enjoying a joke, often at the expense of himself, he was known to join the primary school parent race halfway down the straight, giving himself a much-needed head start. Walking across Williams Street to the Supreme Court as he did so often, he once crossed with loquacious barrister Len Flanigan and clinically blind lawyer Keith Smith and the trio were nicknamed “the dumb leading the blind leading the lame”. He thought it was hilarious.

With heavy splint and walking stick, you never once heard him complain. Much to the chagrin of the family when he was 60, he applied for a disabled car park. It was a shock – he just wasn’t regarded as disabled.

After losing Mary in 2018, he moved to Star of the Sea Torquay, where the races, and his brother’s part ownership in Redzel, kept his spirit alive. He was passionate about the horses and had been a regular attendee of the races and trots, owning many trotters with his brothers named after family members, such as Arresting Tess and Mattenandi.

And, with his eternal optimism and enthusiasm, he filled the long COVID year of 2020 with joy awaiting the birth of his first great-grandchild Sophie, he wrote her a poem and had a piece of art made for her – he derived great joy from giving.

Letters found among his things recently are testament to his humanity, many clients writing to thank him for the pro bono work, prison inmates thanking him for his compassion, an overwhelming sentiment of gratitude. As one letter said: “You have restored my faith in humanity.”

Frank is survived by his five sons, four daughters, 14 grandchildren and one great grandchild.

Vale, dad, for a polio victim, you packed in a hell of a life.