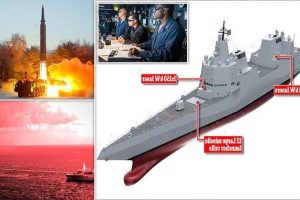 The US Navy’s next generation of warships will fire hypersonic missiles and shoot down enemy weapons with super-strength lasers, ambitious new plans have revealed.

The new DDG(X) – expected to begin construction by 2028 – will be the largest war vessel the Navy has attempted to build in more than 20 years.

The project hopes to attach two sets of 600kw lasers – 10 times more powerful than any laser the service currently holds – to the rear of the ship, as well as another 120kw laser towards the front, alongside 12 missile launch cells.

It is hoped that once the ships are complete, the missile launch pad can be stocked with Pentagon’s emerging hypersonic missiles being developed for the Navy, Army and the Air Force.

It comes amid a global arms race between the world’s major military powers – in particular the US, China, Russia and North Korea – to develop the missiles, deemed the ‘new generation’ of sophisticated weaponry.

Hypersonic missiles usually fly towards targets at lower altitudes than ballistic missiles and can achieve more than five times the speed of sound – or about 6,200 kms per hour (3,850 mph). 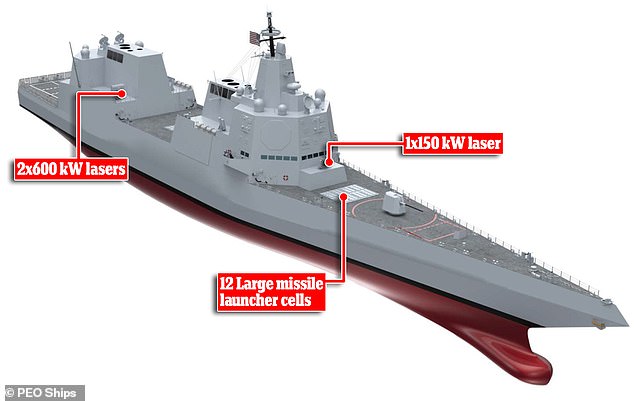 The new DDG(X) (pictured)- expected to begin construction by 2028 – will be the largest war vessel the Navy has attempted to build in more than 20 years. The project hopes to attach two sets of 600kw lasers – 10 times more powerful than any laser the service currently holds – to the rear of the ship, as well as another 120kw laser towards the front, alongside 12 missile launch cells. 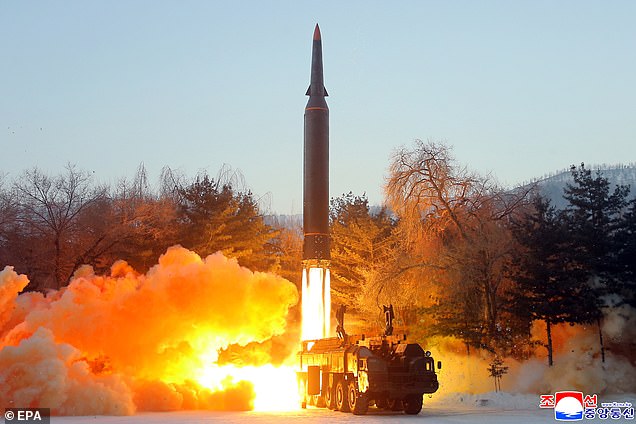 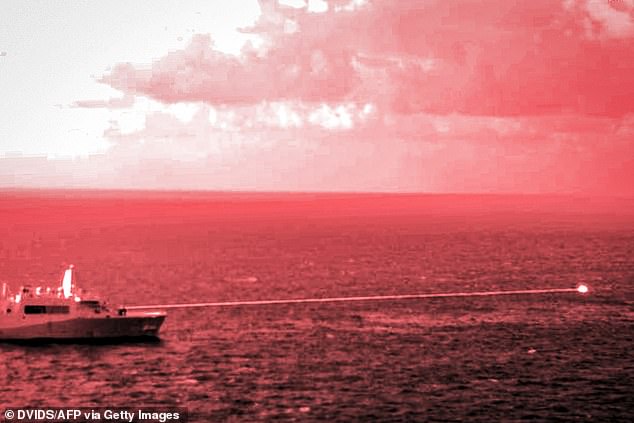 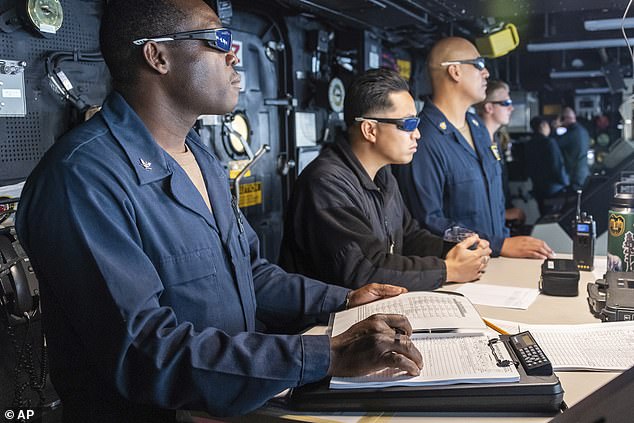 Despite their name, analysts say the main feature of hypersonic weapons is not speed – which can sometimes be matched or exceeded by traditional ballistic missile warheads – but their manoeuvrability, making them more capable of dodging anti-missile defence systems.

It means whoever masters the weapons first could render their enemy’s missile defence systems practically useless.

According to newly released plans, the DDG(X) ship will also trade the traditional gas-turbine propulsion system for one similar to the Integrated Power System found on the Zumwalt class of guided missile destroyers – which uses its gas turbines to drive its own electrical grid that generates more than 75 megawatts of power, enough to light a small town, reports USNI.

The DDG(X) follows the Flight III Arleigh Burkes which are planned to be operational until at least the 2060s – however a new generation of warship is needed to battle the ever-evolving threat, said Connelly. 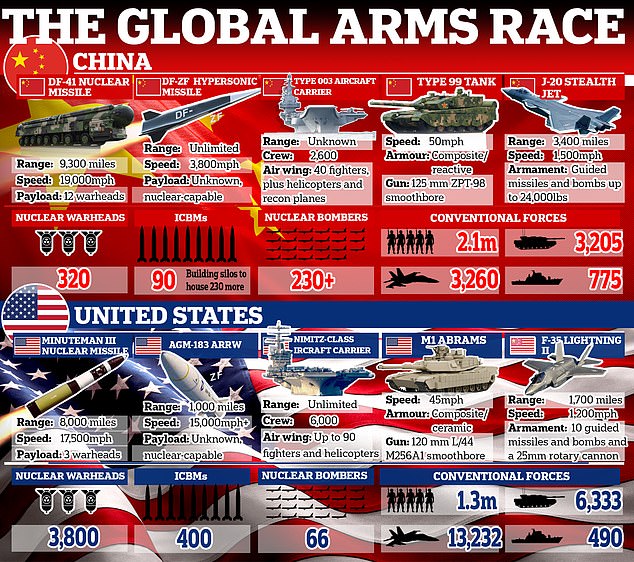 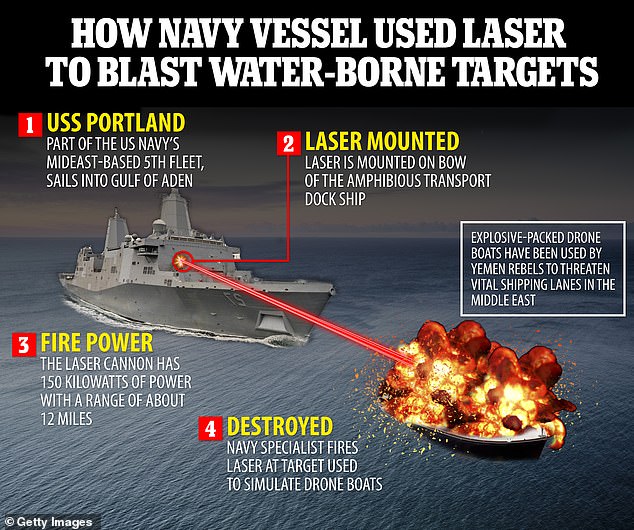 The US Navy announced last month that it fired a laser weapon to destroy a floating target in a Middle East waterway where Iran-back Yemen rebels have used drone boats packed with explosives to threaten ships. The test saw the USS Portland fire the Laser Weapon System Demonstrator at the target in the Gulf of Aden, which separates East Africa from the Arabian Peninsula.The system used by the Navy’s Mideast-based 5th fleet could be used to counteract drone boats used by Yemen’s Houthi rebels

She added: ‘In order to understand DDG(X) and the need for it, you really need to talk about the large surface combatant as a whole.

‘Flight III is going to be in the fleet through the [2060s]. So, the threat is going to continue to evolve. And there will be new threats out there.

‘We on the Navy side will continue to evolve our combat and other capabilities to deter the threat. And we will need a platform that can accommodate those new technologies.’

But it’s not all about the weapons. The DDG(X) will be able to travel 50 per cent further and will use 25 per cent less fuel than its predecessor, the DDG-51.

It will also be better at moving through the Arctic, which has been on the Pentagon’s radar for several years now – particularly as Russia has built several military bases in the region, and conducted a large number of patrol and training operations there.

Connelly added: ‘When we upgraded the Flight III … we took up all of the service life allowance on that platform. All of the space, weight and power has all been allocated. There is not enough room on that ship to put a new combat capability that takes more power or a larger footprint within the ship.

‘The first ship will focus on a new hull form and a new integrated power system. We will use the proven combat system from the Flight III ship so we are designing the ship with the flexibility and the margins to accommodate the future of the Navy and the needs for where we’re going.’

However the size of the ship and its estimated costs have yet to be divulged – if they are even yet known. 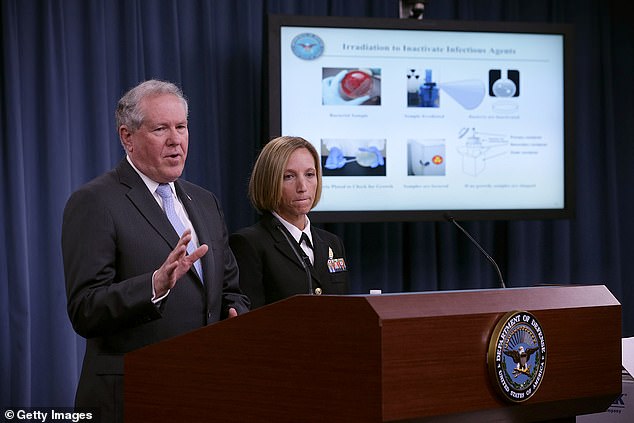 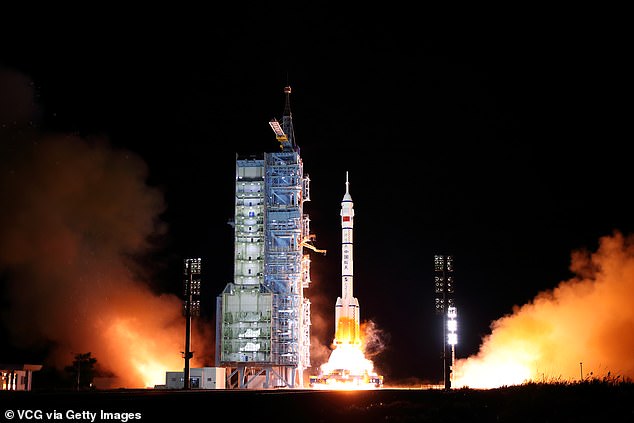 A Long March 2C carrier rocket has been used by China to test hypersonic weapons, the Pentagon has confirmed

It comes after the U.S. Air Force secretary admitted in November last year that the US and China were engaged in arms race to develop the most lethal hypersonic weapons.

‘There is an arms race, not necessarily for increased numbers, but for increased quality,’ Air Force Secretary Frank Kendall told Reuters during an interview in his Pentagon offices.

‘It’s an arms race that has been going on for quite some time. The Chinese have been at it very aggressively.’

Space Force Lieutenant General Chance Saltzman later said that China’s new hypersonic weapon system might be able to stay in space for an extended amount of time, according to The Drive.

‘I think the words that we use are important, so that we understand exactly what we’re talking about here,’ Saltzman explained. ‘I hear things like hypersonic missile, and I hear suborbital sometimes. 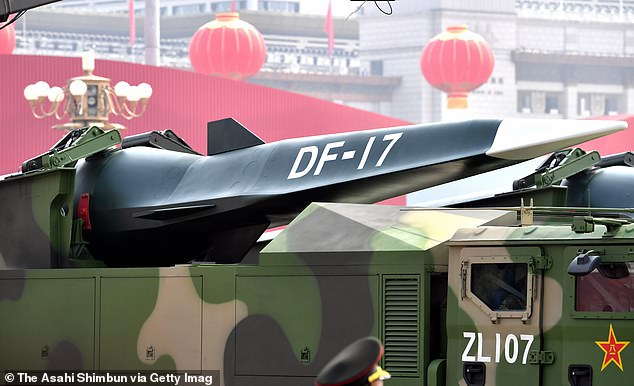 ‘This is a categorically different system, because a fractional orbit is different than suborbital.

‘A fractional orbit means it can stay on orbit as long as the user determines and then it de-orbits it as a part of the flight path.’

In October, the Navy successfully tested a booster rocket motor that would be used to power a launch vehicle carrying a hypersonic weapon aloft.

Kendall noted that while the U.S. military has focused funds on Iraq and Afghanistan, it has taken its eye off the ball in terms of hypersonic weapons.

‘This isn’t saying we’ve done nothing, but we haven’t done enough,’ he said.

As the Pentagon enters the 2023 annual budget cycle, Kendall hopes to raise funds with the retirement of older and expensive-to-maintain systems in favor of new systems, including hypersonic development programs.

Russia and China are attacking US satellites ‘every single day’ with lasers, radio jammers and cyber attacks in a shadow space war, Space Force commander claims

American satellites far outside the Earth’s orbit are facing a near-constant barrage of threats from Russian and Chinese technology, and it’s only getting worse, a top Space Force officer is warning.

An arms race in space between the US, Russia and China has been steadily heating up in recent years even as officials in Washington warn that such a build-up is dangerous.

‘The threats are really growing and expanding every single day. And it’s really an evolution of activity that’s been happening for a long time,’ General David Thompson told the Washington Post in a piece published on Tuesday.

Thompson is the US Space Force’s first vice chief of space operations, having previously served more than three decades in the Air Force.

He warned, ‘We’re really at a point now where there’s a whole host of ways that our space systems can be threatened.’

Some of the regular attacks facing the US include the use of lasers, radio frequency jamming and other cyberattacks, Thompson said.

He also revealed that a 2019 weapons test by a Russian satellite came so close to a US satellite that the military feared an imminent attack.

The general assured that when it comes to outer space technology, ‘We are still the best in the world, clearly in terms of capability.’

However he said China was ‘catching up quickly,’ adding: ‘We should be concerned by the end of this decade if we don’t adapt.’

Thompson said China is sending up new satellites twice as fast as the US is managing to, and that the budding superpower is working on a system of global satellites aimed at surveilling any part of the world.

‘They’re fielding operational systems at an incredible rate,’ he said. 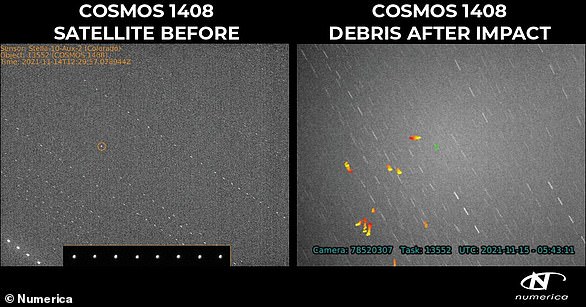 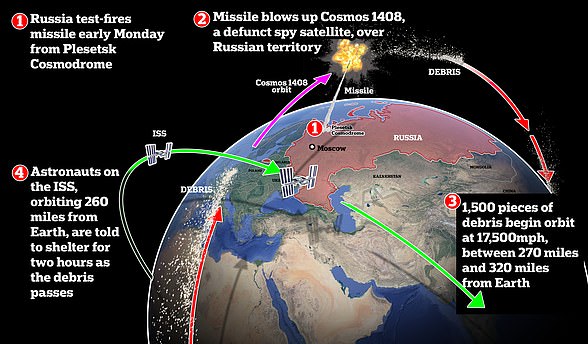 Russia blew up one of its own satellites on Monday, November 15, using a missile. Cosmos 1408, a defunct spy satellite launched in 1982, was the destroyed target, which resulted in a field of 1,500 pieces of debris endangering the crew of the ISS

For years China has reportedly been working on a satellite that could physically attack another object in space with a robotic arm or grappling hook.

In theory it could disrupt or even disable US satellites which revealed information about China’s nuclear operations and the existence of Uyghur Muslim concentration camps.

‘The Chinese are actually well ahead’ of their Russian counterparts, Thompson claimed.

Russia’s anti-satellite, or ASAT, launched on November 15, and purposefully shattered the country’s 4,410-pound Cosmos 1408 satellite, launched in 1982, because it was no longer operational.

According to experts, the space debris from last week’s collision over the Atlantic Ocean – which included ‘some 1,500 pieces of trackable size’ – will cause havoc for spacecraft for years, if not decades.

Because of the impact, astronauts on the International Space Station (ISS), orbiting 260 miles from Earth, were told to shelter for two hours to let the debris pass.

One space firm slammed Russia for endangering the crew of the ISS, calling it an ‘irresponsible act that harms all spacefaring nations’.

In 2019, a small Russian satellite was deployed so close to a ‘national security satellite’ belonging to the US that the government was unsure if it was an attack.

But the situation was diffused when the Russian satellite backed away, releasing a small target then shooting it in a weapons test.

‘Clearly, the Russians were sending us a message,’ Thompson claimed.

The Space Force general would not say whether Russia or China has done any permanent or significant damage to US equipment in space, explaining that such an attack would be classified.

But just today, NASA was forced to postpone a spacewalk outside the International Space Station (ISS) today after receiving a ‘debris notification’ for the orbital outpost.

Astronauts Thomas Marshburn and Kayla Barron were set to venture outside the giant orbiting laboratory at 7:10am ET for six and a half hours to replace a faulty radio communications antenna.

‘NASA received a debris notification for the space station,’ the space agency tweeted.

‘Due to the lack of opportunity to properly assess the risk it could pose to the astronauts, teams have decided to delay the Nov. 30 spacewalk until more information is available.’

It is not clear if the debris stems from the event two weeks ago, when Russia blew up one of its own decommissioned satellites.