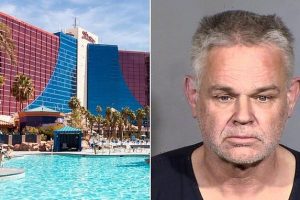 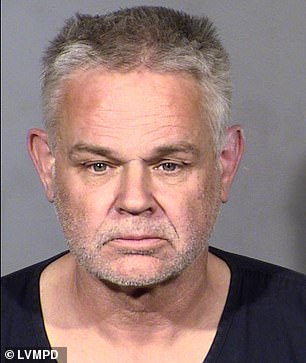 Eric Holland, 57, was charged with open murder after he was arrested on Thursday on an open warrant for embezzlement and theft charges relating to a 2019 incident

Las Vegas cops made a startling discovery on Thursday when they found a severed head in the truck of a suspect wanted on theft and embezzlement charges.

According to the Las Vegas Review-Journal, Eric Holland was wanted on charges of using another person’s ID, auto embezzlement of more than $3,500, intent to use a false check and theft of more than $3,500 when he was stopped by Metropolitan Police near the Rio All-Suite Hotel and Casino at around 3.42pm on Thursday.

Police tried to stop the second truck, but Holland fled again before ultimately being located at an apartment complex near the 4200 block of Rochelle Avenue.

He allegedly threw things at officers and tried to run away before cops Tased and he was booked into the Clarke County Detention Center.

But as the cops searched his trucks – both of which had been reported stolen – they found the gruesome discovery.

One of the truck beds had large coolers in it, which police found contained human remains – including the severed head. The Metropolitan Police Department’s Homicide Unit has now taken over the investigation and identified Holland as the suspect, according to the Review-Journal.

Holland is now due in court on Tuesday morning, where he will face an additional charge of open murder.

It is unclear who the victim of the apparent homicide is and whether they are connected to Holland’s 2019 charges.

DailyMail.com has reached out to the Metropolitan Police Department for more information.

Over the past year, the murder rate in Vegas rose 48.96 percent, according to data from the Metropolitan Police Department.

There have been 143 murders reported this year in Vegas through December 17, while 2020 saw only 96 murders during the same time period.