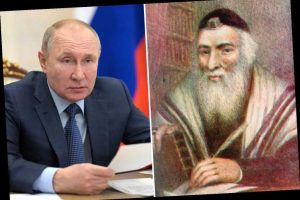 A FEARED outbreak of war between Russia and Ukraine could herald the coming of the Messiah, scholars claim.

A rabbi says it would fulfil a centuries-old prophecy by his famous ancestor Vilna Gaon, who is hailed as one the most influential Jewish leaders in modern history. 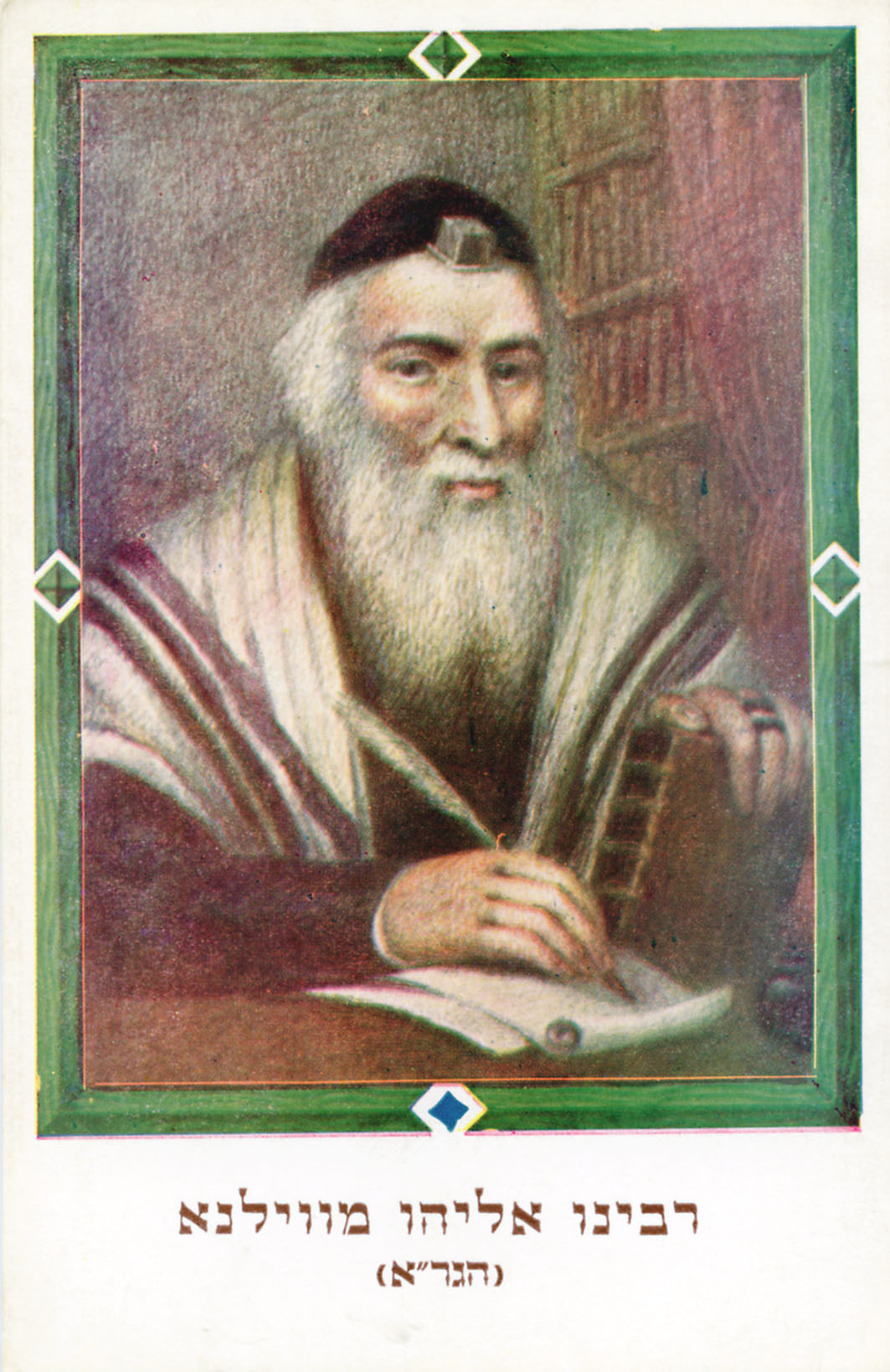 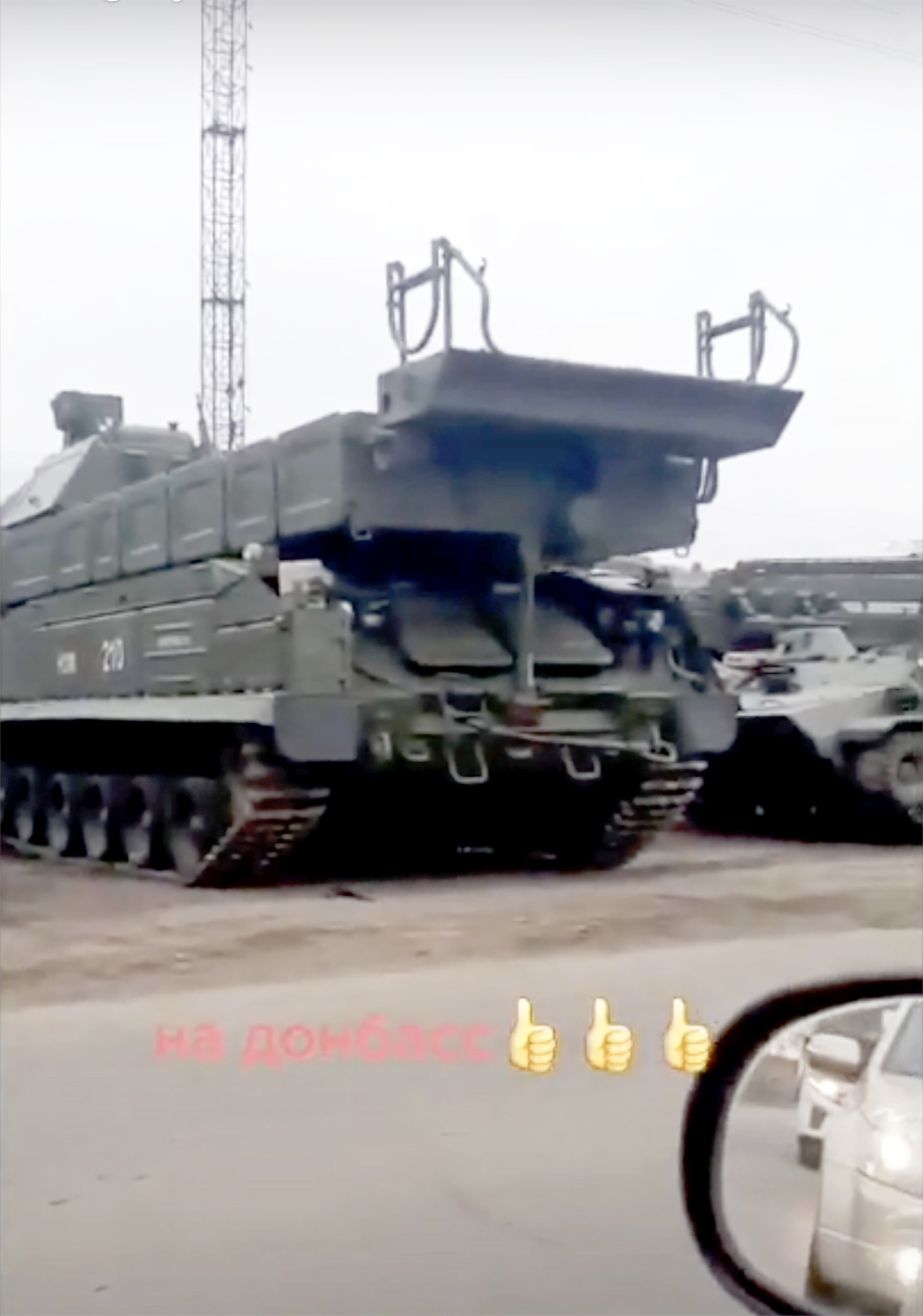 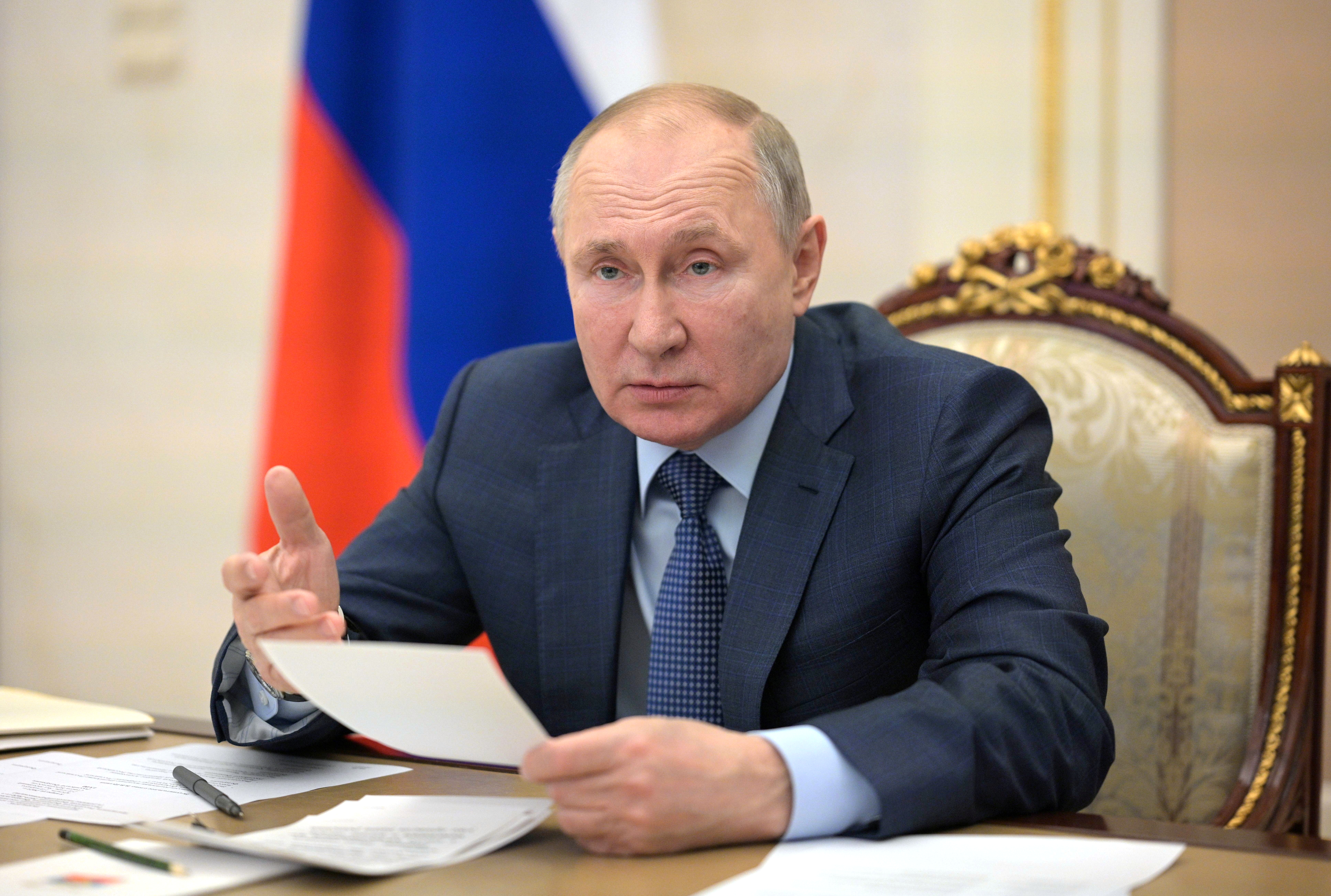 It has come to light as renewed conflict in rebel-held eastern Ukraine threatens to erupt into all-out war.

Vladimir Putin has sent tanks and heavy artillery to the border as Nato allies fear Russia is planning an invasion.

Analysts have warned the conflict could drag in the US and European nations, as a Putin ally urged him to consider using nukes.

The worrying escalation in military tension has been cited by scholars as the fulfilment of Vilna Gaon's prophecy made in the 18th century.

The cleric – also known as Rabbi Elijah of Vilna – was a leading interpreter of religious texts and one of the most influential Jewish figures since the Middle Ages.

He is said to have handed down a prophecy to his son that said: "When you hear that the Russians have captured the city of Crimea, you should know that the times of the Messiah have started, that his steps are being heard.

"And when you hear that the Russians have reached the city of Constantinople, you should put on your Shabbat clothes and don't take them off, because it means that the Messiah is about to come any minute."

While Christians believe Jesus Christ was the Messiah, Jews believe the promised saviour who will transform the nations of the Earth is yet to come.

Russian forces have not yet entered Constantinople – now called Istanbul – although they have come into conflict with Turkish forces in Syria.

And Putin's troops annexed the Crimean peninsular in 2014 after civil war broke out in the Russian-speaking Donbas region of eastern Ukraine. 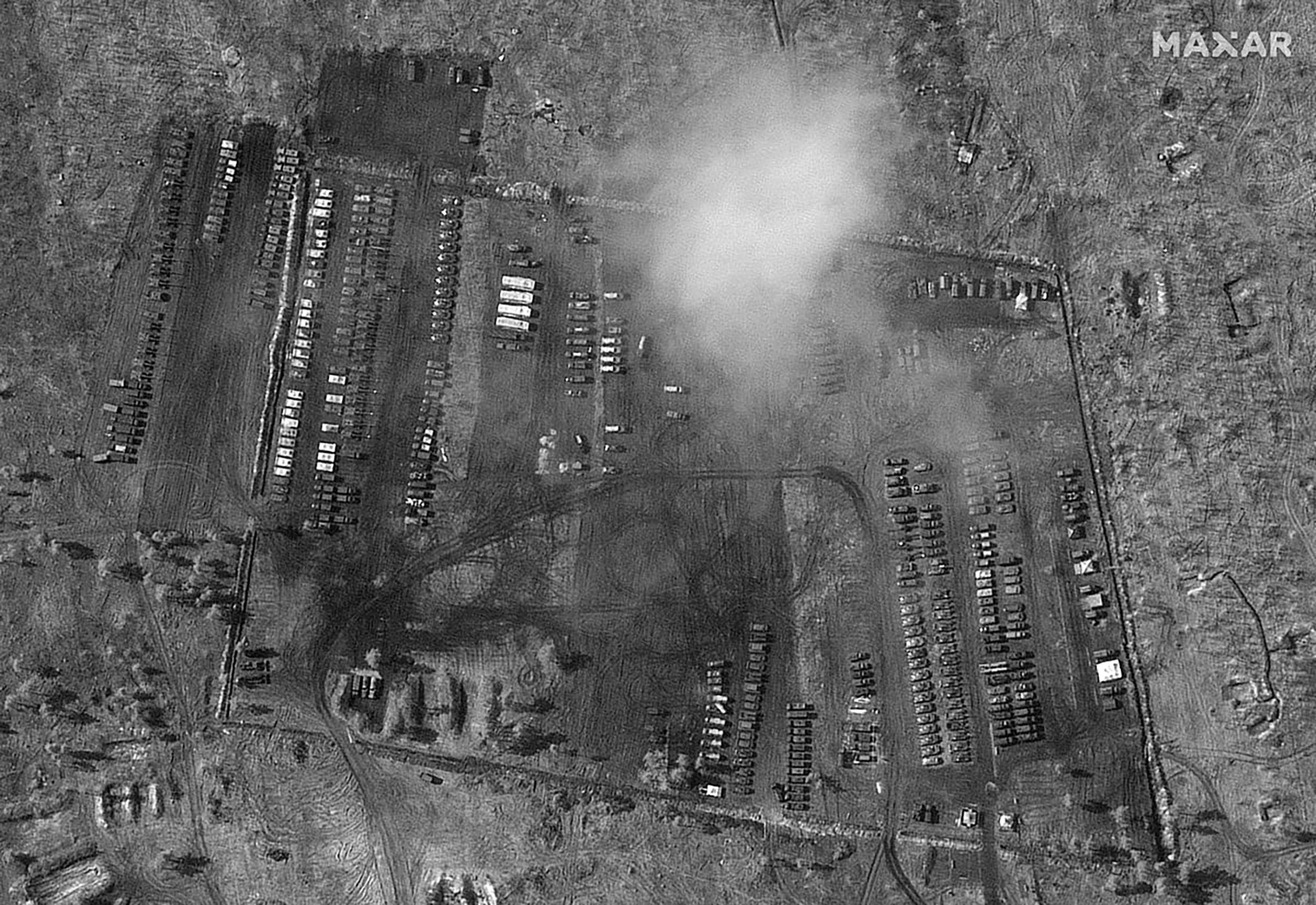 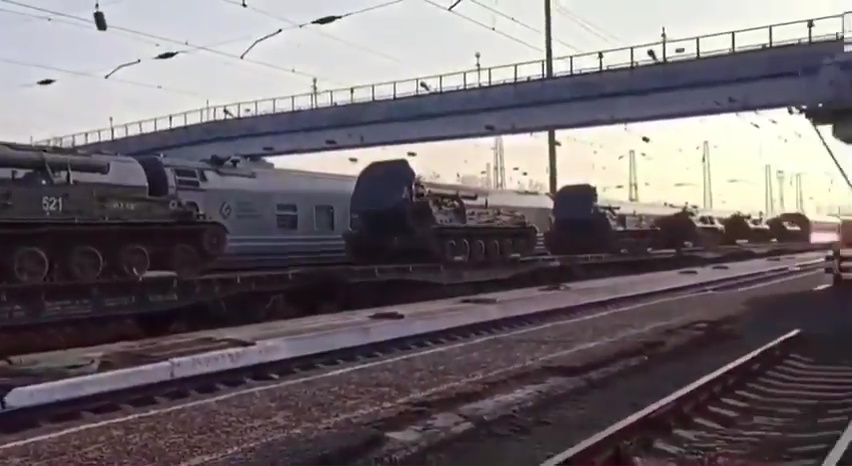 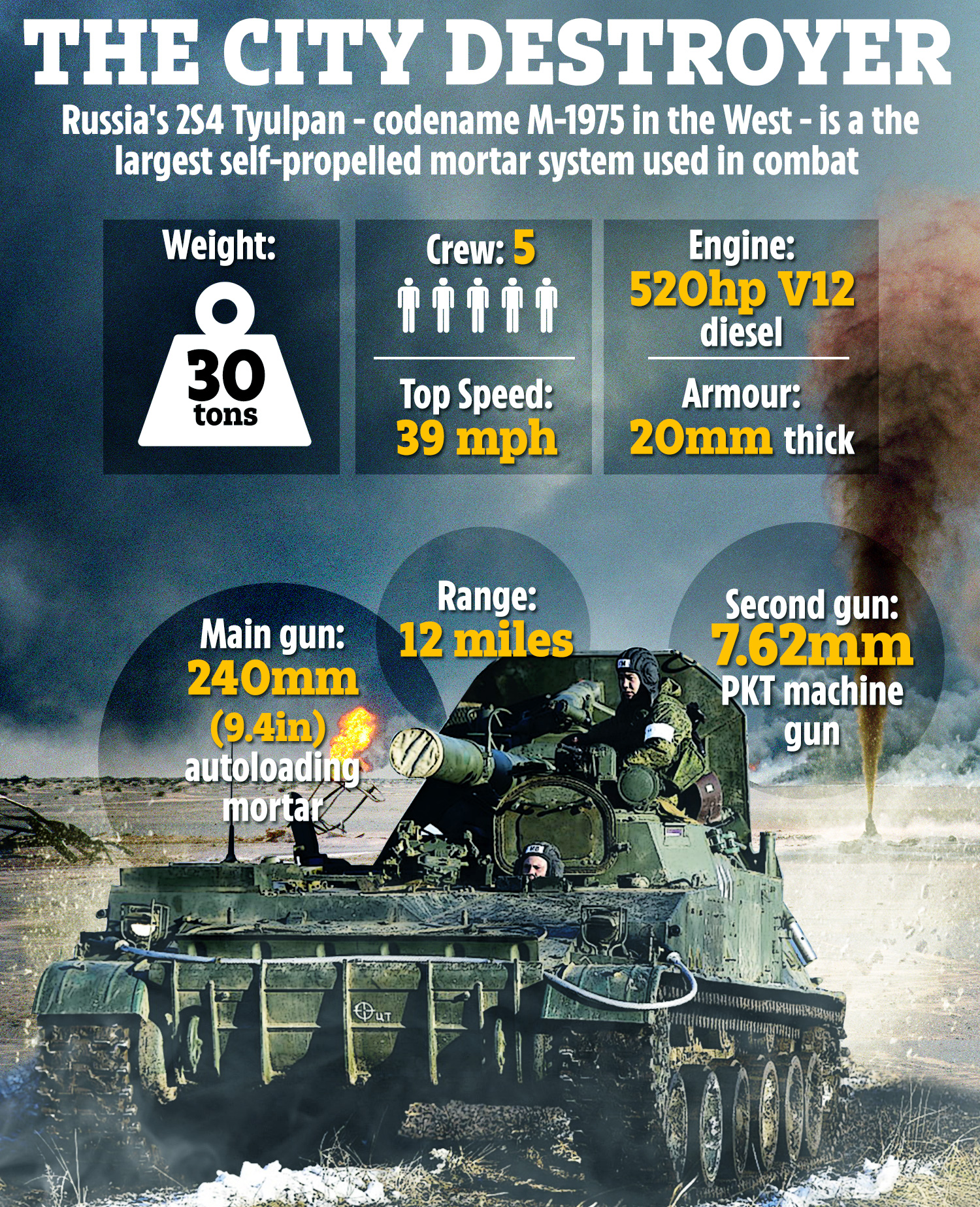 Vilna Goan's prophecy was brought to light by his great-grandson Rabbi Pinchas Winston, an author who specialises in theories about the end of days.

He says the alarming situation in Eastern Europe seems to parallel the war of Gog and Magog, the opponents of God mentioned in some apocalyptic Biblical texts.

"It is known that the Gog and Magog will come from the north," Rabbi Winston said.

He also noted that war between Turkey and Russia was predicted to happen before Gog and Magog.

"The two nations have faced off before," he said.

"Each time is like the building of a tower of explosives.

"It may seem like small events set off major conflicts but in every case, the conditions were all in place, waiting for a spark to set them off."

Other scholars have also linked Russia with with the Biblical invader Gog.

In the early 19th century, some Hasidic rabbis identified Napoleon's invasion of Russia as "The War of Gog and Magog".

Others in the 20th century suggested the Soviet Union was the Gog figure that could trigger the end of the world.

The theory resurfaced amid new fears that Moscow is massing a force capable of invading its neighbour.

Today the Russian army was said to be moving BUK anti-aircraft missiles in a region close to Ukraine.

The weapons system was used in rebel-held Donetsk in 2014 to down a Malaysia Airlines Boeing 777 killing 298 people.

Video shows the BUK being moved in Voronezh region which borders Ukraine – part of a huge task force being rapidly put in place.

And satellite pictures are said to show a camp for paratroopers in the same region.

Other footage earlier this week showed the nuclear-capable 2S4 Tyulpan self-propelled 240mm mortar system – dubbed the "city destroyer" – being moved on a military train in Krasnodar region near Crimea.

The deployment comes after Russia sent 4,000 soldiers plus convoys of tanks and armoured troop carriers to the border last week. 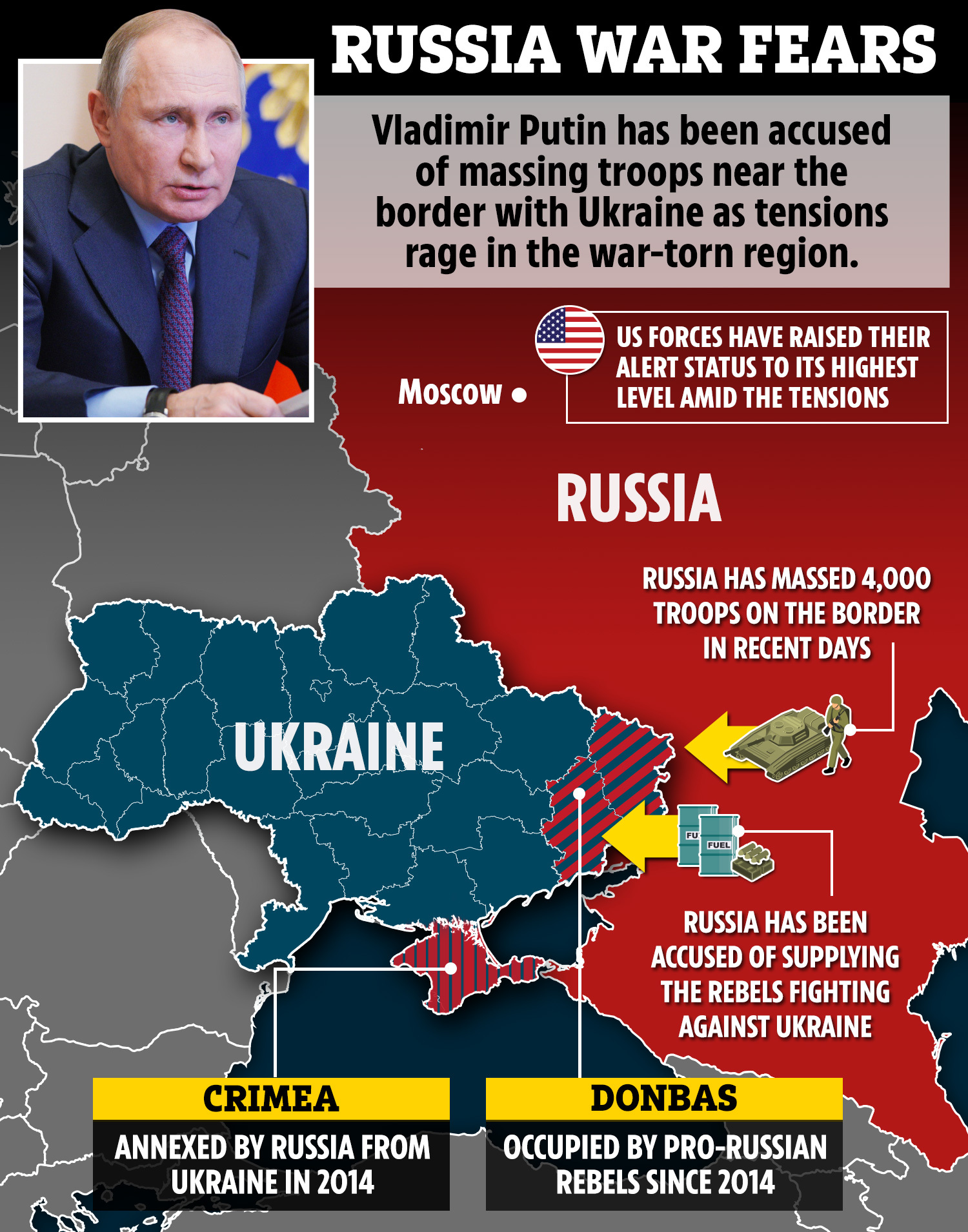 In a chilling warning today, one of Vladimir Putin’s most senior officials warned that Ukraine would not survive if Russia took military action.

“I support the assessment that … the start of military action – this would be the beginning of the end of Ukraine,” said Dmitry Kozak, deputy head of Russia’s presidential administration.

Ukraine's president Volodymyr Zelensky visited the front line in Donetsk today after a surge in clashes between Russia-backed rebels and government forces.

He has appealed for help from Nato, which has warned Russia to withdraw from confrontation.

“The chancellor made a call to stop this military increase in order to achieve a de-escalation of the situation,” her office said.

But Putin hit back blasting the “provocative actions of Kyiv, which has been intentionally escalating the situation at the contact line”, according to the Kremlin. 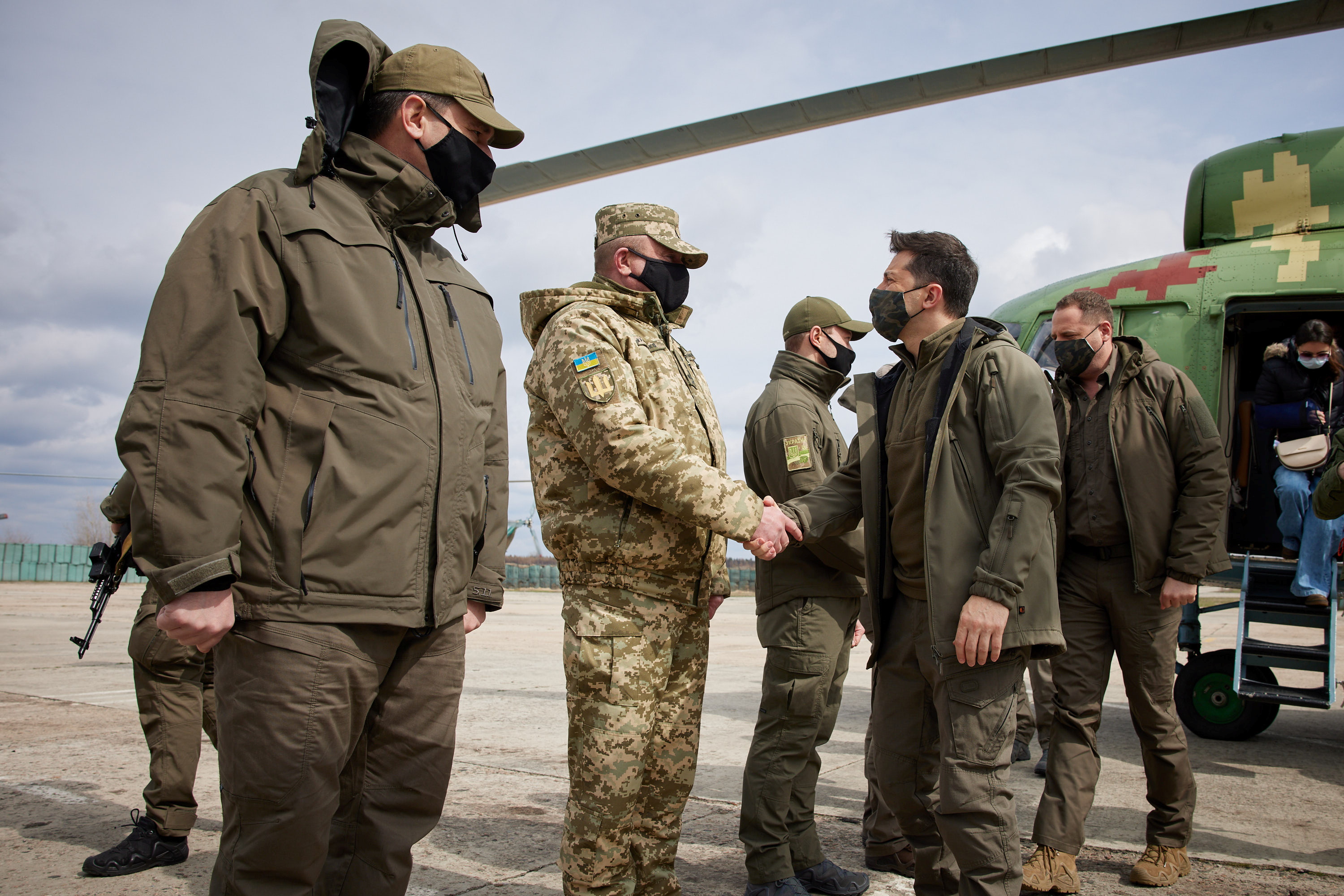 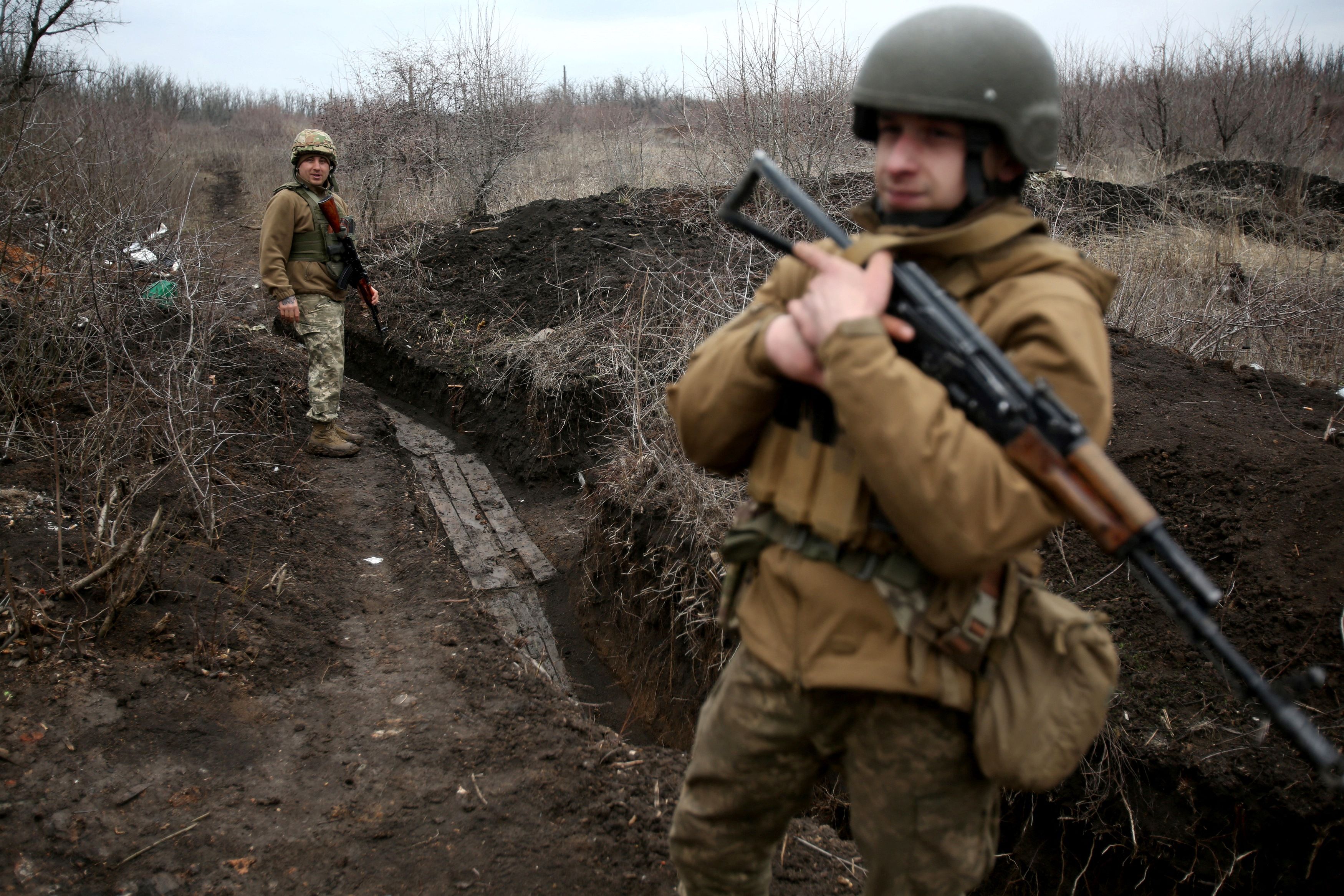 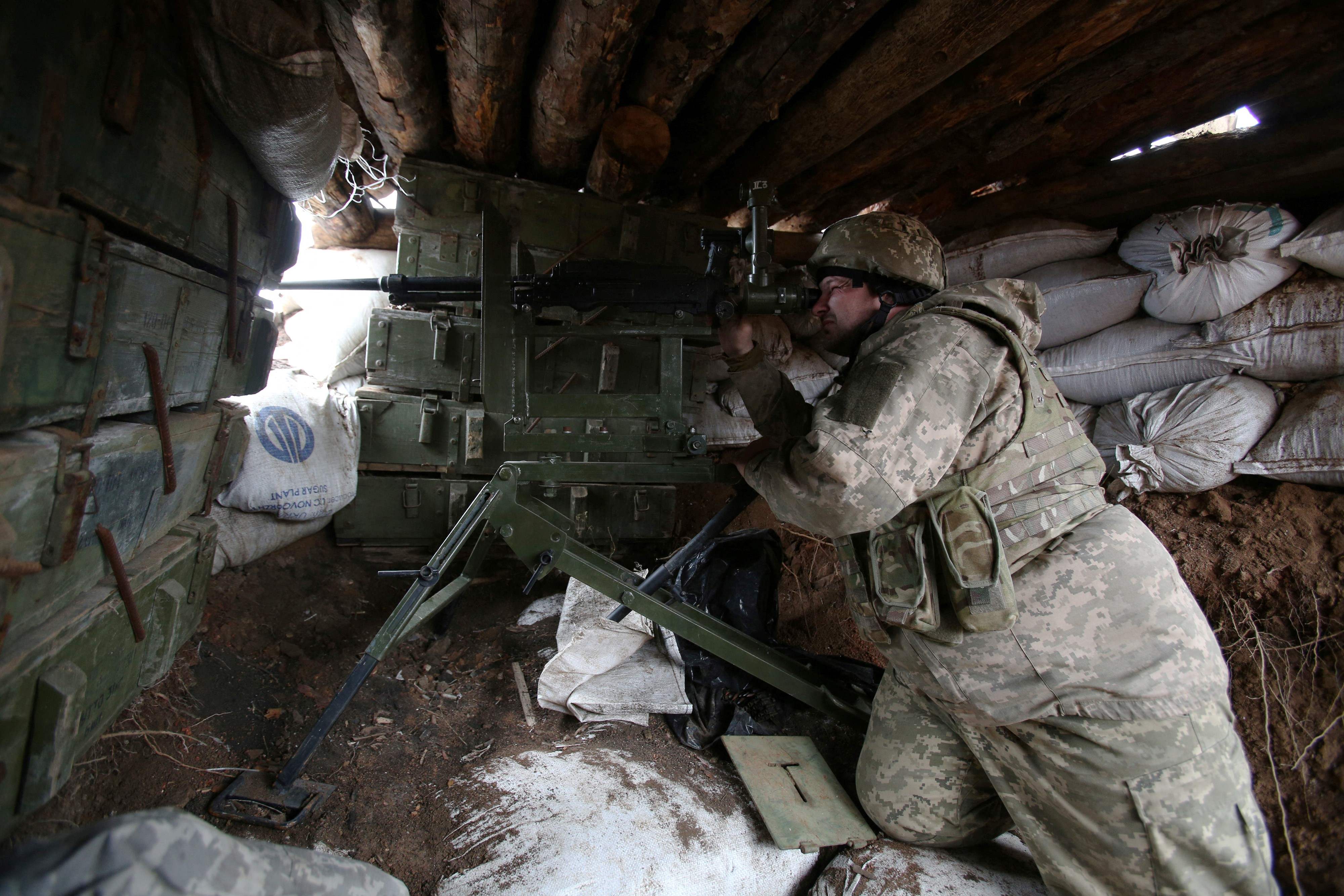 What is happening between Russia and Ukraine?

RUSSIA and the Ukraine have remained technically at war since 2014.

Ukraine was aligned with Russia as part of the Soviet Union until its collapse in 1991, following which it became an independent state.

Both nations remained closely tied – but Ukraine gradually began to distance itself, seeking deeper ties with the West.

The open conflict was triggered by the Ukrainian Revolution in 2014 – when an uprising overthrew the pro-Russian government of Viktor Yanukovych.

Vladimir Putin's forces reacted by annexing the region of Crimea from Ukraine – a move which was widely condemned by the West.

The conflict then spiralled when pro-Russian groups in Eastern Ukraine then took up arms against the state.

Russia gave their backing the separatist forces which formed breakaway republics in Donetsk and Luhansk.

Putin's forces then launched a military incursion into these regions as they gave their support to the rebels.

Russia continues to hold Crimea – and claims the region joined them willingly after they a referendum.

Almost seven years have now passed and the War in Donbass remains at a stalemate.

It is estimated some 14,000 have been killed in the conflict, including more than 3,00 civilians.

Ukraine and the rebels signed a new ceasefire in July 2020 – but clashes have been steadily increasing again since last November.