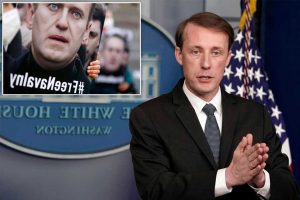 Vladimir Putin: I’m surprised we haven’t been blamed for BLM yet

The Biden administration is moving to impose a new slate of sanctions on Russia over the poisoning of outspoken Kremlin critic Alexei Navalny, national security adviser Jake Sullivan announced Sunday.

“We are preparing another package of sanctions to apply in this case,” said Sullivan during an appearance on CNN’s “State of the Union” Sunday morning show. “We’ve shown all along the way that we are not going to pull our punches, whether it’s on SolarWinds, or election interference, or Navalny when it comes to responding to Russia’s harmful activities.”

Navalny, 45, is currently imprisoned — and reportedly in poor health — for breaching the terms of a suspended sentence in a 2014 embezzlement case, which he has dismissed as politically motivated.

The outspoken critic of Russian strongman Vladimir Putin was arrested in January, shortly after returning to Russia from Germany, where he was recuperating from being poisoned on two separate occasions with a Soviet-era nerve agent.

Navalny has blamed the attempts on his life on the Kremlin, accusations that Russian officials have denied.

Sullivan told CNN that the next round of sanctions will take effect once the US can “ensure that we are getting the right targets.”

“When we do that, we will impose further sanctions with respect to chemical weapons,” he said.

The move comes less than a week after President Biden and Putin met face-to-face in Geneva, Switzerland.

Republican lawmakers and seasoned US diplomats blasted Biden for his handling of the summit, accusing the president of taking it easy on Putin and allowing him to deliver Russian propaganda unchecked at a solo press conference following the sit-down.