Why the battle for Mariupol is so important for Putin 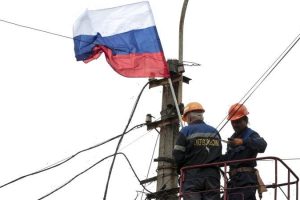 Moscow: For Russia, the Ukrainian port city of Mariupol is a potent symbol.

It is a predominantly Russian-speaking city in the eastern Ukrainian region known as the Donbas, the one where President Vladimir Putin falsely claimed Ukraine was carrying out a “genocide” before launching his invasion.

The Azovstal steel plant in the middle of the city has also become the last bastion of Ukrainian military’s Azov regiment, whose origins in a far-right military group, the Azov Batallion, have lent a veneer of credibility to Putin’s false narrative that the country is overrun by Nazis.The steel plant is the last holdout of Ukrainian resistance in Mariupol as Moscow’s forces mount a final push to seize control of the city. 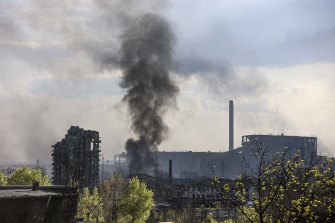 Smoke rises from the Azovstal plant in Mariupol, where civilians remain trapped.Credit:AP

In weeks of fierce fighting, much of the city of more than 400,000 was levelled, and Ukrainian officials said more than 20,000 civilians were killed. But despite the horrific toll, Russian state media outlets are now highlighting Russia’s capture of almost all of Mariupol as a long-anticipated victory in Putin’s campaign to “denazify” Ukraine.

That message is particularly important to the Kremlin this week, as it prepares for May 9 celebrations Monday, when Russia marks the Soviet victory over Nazi Germany. The looming Victory Day holiday — one of the most important dates on the calendar for Russians as they remember the 27 million Soviets killed in World War II — is already being used by the Russian government to channel national pride into support for the war.

Vladimir Solovyov, a hawkish state television host, travelled to Mariupol this week and was captured on video holding court in the city in military fatigues, later telling viewers that local residents “wanted to touch me and hug me”.

Another host, Dmitry Kiselyov, highlighted the fight for Mariupol last Sunday on his marquee weekly news show, which declared: “Denazification is when the neo-Nazis from the Azov Battalion rot alive in cold factory basements.”

But perhaps the most striking sign of Mariupol’s importance ahead of May 9 is that one of Putin’s most powerful aides, deputy chief of staff Sergei Kiriyenko, visited the city this week. He was shown meeting with a man described as a Mariupol World War II veteran, and looked on as the man became the first Mariupol resident to get a passport of the breakaway “Donetsk People’s Republic,” which Putin recognised as independent in February.

On Wednesday, Kiriyenko helped unveil a statue to “Grandma Anya” — a Ukrainian woman filmed greeting Ukrainian soldiers with a Soviet banner last month, apparently thinking they were Russian, according to Russian media.

Anya has become a symbol for proponents of the war in Russia of the idea that some Ukrainians are in fact greeting Russian troops as liberators. Kiriyenko, in his speech, evoked the May 9 holiday and called her “a living symbol of the continuity of generations. Continuity in the fight against Nazism and fascism”.

In a short video released on Thursday (Friday AEST), the Ukrainian government identified her as Anna Ivanova and said her home had been hit by a Russian shell; she says in the video that it was “very lousy” that Russia had invaded. 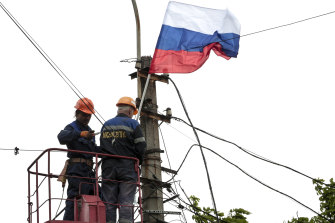 Municipal workers attach a Russian national flag to a pole preparing to celebrate 77 years of the victory in WWII in Mariupol, Thursday, May 5, 2022.Credit:AP

Kiriyenko is in charge of domestic politics in Putin’s administration, and the fact that he is becoming closely involved in Russian-occupied eastern Ukraine is being seen as a signal that the Kremlin may be planning to incorporate the territory into Russia. In Mariupol, Kiriyenko said that it would not be possible to hold Victory Day parades on Monday in Donetsk and Luhansk, the main cities of the Donbas, but he pledged they would take place in the future.

“This time will come, and it will come soon,” Kiriyenko said.

Russian state media have given short shrift to the devastation in Mariupol, and have falsely claimed that Ukrainian forces firing at their own city are largely to blame. At Wednesday’s statue unveiling, Denis Pushilin, the head of the Donetsk separatist region, acknowledged the destruction but also evoked World War II to promise that the city would be rebuilt, according to a news release issued by his office.

“I am sure that we will also manage it,” Pushilin said, “especially because Russia is with us.”