Young Victorians keen to get the AstraZeneca vaccine 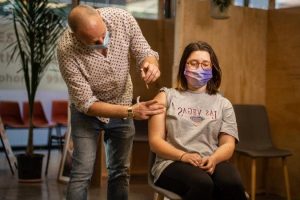 Young Victorians have had a resoundingly positive response to the news the AstraZeneca vaccine is being made available to all Australian adults, regardless of their age.

Joe Laney already had a doctor’s appointment at the Inner North Medical Clinic in Brunswick East and decided to tack a jab onto his appointment. 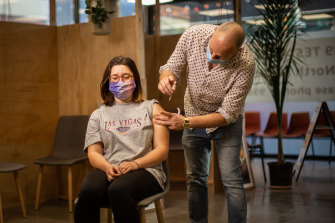 Emma Kong, 23, received the AstraZeneca vaccine the day after the PM said it would be available for all ages. Credit:Scott Naughton

The 32-year-old said he considered the chance of blood clots but the benefits of being inoculated outweighed the risk.

“There are a lot of young people waiting and wanting to get it as soon as possible,” he said.

Emma Kong received the vaccine on Tuesday at the same clinic. The 23-year-old said she was keen to get it done.

“It was good, everyone was really nice and it didn’t really hurt that much,” she said.

Dr Shea Wilcox, a general practitioner at the clinic, said the two were among about 30 people aged under 40 who received the AstraZeneca vaccine on Tuesday, the day after Prime Minister Scott Morrison announced a new no-fault vaccine injury indemnity scheme for GPs.

The scheme allows those who want an AstraZeneca vaccine to have that conversation with their doctor, including those aged under 40 and not yet eligible for the Pfizer vaccine. The Pfizer vaccine is still the preferred vaccine for people aged under 60.

Dr Wilcox said about another 40 people aged under 40 had booked in to get the AstraZeneca vaccine on Wednesday so far. He said the clinic had seen an enthusiastic response from many younger people, who were motivated to get fully vaccinated against COVID-19 as soon as possible.

All of them had a discussion with a GP about the side effects of the AstraZeneca vaccine, including extremely rare blood clots.

“All [are] very well informed of the rare instances of significant side effects,” Dr Wilcox said.

Dandenong Ranges resident Dave Bushell, 38, was among dozens of people who wrote to The Age saying they were keen to get the jab as soon as possible.

“Both my parents are [vaccinated], my sister is a frontline health worker, my partner is eligible for [the] Pfizer [vaccine], so I’m basically sitting around waiting to become eligible for a vaccine,” he said.

Mr Bushell said COVID-19 vaccinations were the only way through the pandemic, and he didn’t think hotel quarantine was going to be sustainable anymore.

He was frustrated by there being no sense of when under-40s would be eligible to get vaccinated with the Pfizer vaccine, although he appreciated the vaccine rollout was a “massive logistical situation”.

“[I’ve been telling my family that] meanwhile, you see a bunch of … sort of older people standing around going: ‘Well, is this the right vaccine for me? Well, maybe I’ll shop around, maybe I’ll wait.’

“[You’re like], ‘I’ll take it, send it this way’ … and then two days later after I was … moaning to my family about it, they made the decision to do it, which I think is the correct one.”

Another resident of Victoria, Divya, said she was elated when she heard the news she could get an AstraZeneca vaccination. She asked The Age not to report her surname because of the polarising nature of the debate around COVID-19 vaccinations.

The 27-year-old had by Tuesday booked in with her GP to give her consent to receive the AstraZeneca vaccine.

She said she was aware of the risks associated with it, and had full faith in medical experts who’d been working tirelessly to make sure it was safe.

“There’s never a zero risk in anything that we do, and that includes leaving the house every day to go for a walk or getting in your car,” she said.

“I am happy to be a part of the movement to see a more vaccinated Australia.”

He said: “Why would I get this vaccine if I’ve just been told that you should only get it if you’re over 60?

“Why not try to get more doses of Pfizer instead?”

Others weren’t sure whether they should get the AstraZeneca vaccine, like 37-year-old Lachlan Zubevich, who lives in Coburg.

“Basically, I have always been very concerned about the AstraZeneca, so when they did say that they weren’t going to recommend it for people under 50, I actually felt quite relieved,” Mr Zubevich sad.

“I thought, ‘OK, good, I don’t have to take the risk’, which I know is not a very big risk, but I do have some issues [with] my heart valve.

“I just wasn’t quite sure whether I was personally going to be at a higher risk for clotting or not.”

Mr Zubevich said that as the health advice kept changing, he became more frustrated, but he was prepared to sit down with his GP and talk about what getting the AstraZeneca vaccine would mean for him.

Stay across the most crucial developments related to the pandemic with the Coronavirus Update. Sign up to receive the weekly newsletter.