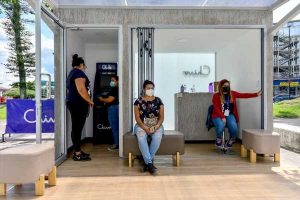 El Salvador is making history as the first country in the world where 50% of its population has a bitcoin wallet.

That’s out of a population of 6.4 million with about 800,000 of them being children under ten, making it more than half of all adults that are now bitcoining.

They’re also actually using it. Main stores, including supermarkets, accept the crypto for payment with Bloomberg reporting on the ground that in San Salvador’s downtown, electronics store owner Santos Enrique Hernandez says he sees as many as 10 customers a day paying in Bitcoin for the headphones, chargers and phone cases he sells.

Transactions are practically free and pretty much instant with one use case here being sending money back home, something that accounts for 20% of El Salvador’s GDP.

Apps like Chivo and Strike now make conversion from dollars to bitcoin and vice versa pretty much instant.

Strike is a for profit wallet, but Chivo is subsidized by the government, so there are no fees. There are no conversion fees, there’s no spread, at least to the best of their ability.

The government hopes they can cover this cost through crypto holdings after buying 700 bitcoin worth nearly $40 million.

That’s while bitcoin’s price dropped to $40,000, with bitcoin making a new high since El Salvador declared it legal tender, trading at about $55,000 currently.

The bet has thus paid off for now, allowing the country to save perhaps as much as $500 million a year in bank transmission fees, a significant sum of their $25 billion GDP.

That could have compounding effects as the money is invested in the economy, potentially translating into growth.

The fast take up has also facilitated a wider monetary digitization as only 30% have a bank account, while now 50% have what is effectively a bank account, both in dollars and bitcoin.

That can add efficiency, including when it comes to taxes which in developing countries are hardly collected because they mostly deal in cash, starving the government of needed funds to invest in roads and schools.

There are also risks however. Bitcoin tends to have bull and bear cycles. The latter can be devastating in the short term, and at a country level, it can be dangerous.

The government there thus needs to educate the public in a neutral manner. Bukele publicly understandably is somewhat bragging at times about the investment having paid off and so on, but bitcoin supporters have long had a mantra of invest only what you can afford to lose. Don’t ape in, do your research first.

The public there needs to be told that crypto is very risky and very volatile and you can lose your investment. In the short or medium term you might even lose 80% and perhaps it never recovers.

In this space we’re used to generally well educated middle or upper middle class mostly youngish men in their 20s to 40s who can afford some risk. But at a country level you have to think of grandma or the poor guy that tends to our roads.

They have to focus more on bitcoin as a conduit for dollar movements, and if they want to hold the coin, they should limit it to about 10% of their savings as otherwise a country level mania may well be quite painful when the other half of the cycle begins.

People however are generally smart with most of these signups probably being to get that free $30 in bitcoin. That itself should teach them the asset can go down and up and therefore is a bit different from the dollar.

As long as that lesson is learned and well, things like risk management, no aping for grandmas and so on, then we’re seeing in action what we predicted in 2014. That some country will try and leapfrog, something that should have benefits but just what it means is now to be seen.