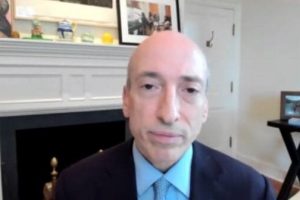 The U.S. Securities and Exchange Commission (“the SEC”) Chairman Gary Genslerhas expressed his thoughts on the crypto space quite a few times since he was sworn into office on April 17.

Gensler was nominated by President Joe Biden to Chair the U.S. SEC on February 3, confirmed by the U.S. Senate on April 14, and sworn into office on April 17, 2021.

According to his SEC bio, “before joining the SEC, Gensler was professor of the Practice of Global Economics and Management at the MIT Sloan School of Management, co-director of MIT’s [email protected], and senior advisor to the MIT Media Lab Digital Currency Initiative.” From 2017 to 2019, he “served as chair of the Maryland Financial Consumer Protection Commission.”

Gensler was “formerly chair of the U.S. Commodity Futures Trading Commission, leading the Obama Administration’s reform of the $400 trillion swaps market.” He was also “senior advisor to U.S. Senator Paul Sarbanes in writing the Sarbanes-Oxley Act (2002), and was undersecretary of the Treasury for Domestic Finance and assistant secretary of the Treasury from 1997-2001.”

Below are a few important highlights from Gensler’s testimony (based on a report by CoinDesk about Gensler’s answers to the questions by the committee members) that should provide some insights on Gensler’s current thinking about crypto.

First, Gensler believes that the SEC has sufficient authority (even without additional powers that it might get receive in the future from the U.S. Congress) to regulate the crypto space since he believes that the existing securities laws make it clear what is a security:

Second, Gensler does not want to be pinned down on which specific cryptoassets are or are not currently considered securities. Basically, he seems to be saying that the Howey Test is clear enough, and as he has said more than once in the past, he believes that many (if not most) of the thousands of cryptoassets out there are more like securities than commodities:

“I’m not going to get into any one token… But I think that the securities laws are quite clear. If you’re raising money from somebody else, and the investing public has a reasonable anticipation of profits based on the efforts of others, that fits within the securities law.”

Third, Gensler believes that it is essential that crypto exchanges that offer their services to investors based in the U.S. talk to the SEC and get registered rather than move their headquarters to more crypto friendly jurisdictions such as Singapore:

“I think if we don’t get these exchanges, these lending platforms inside of the public policy framework, a lot of people are gonna be hurt… I think it’s clear that many of these projects are within the securities laws. We’re gonna use our authorities to try to get more of these projects and companies to register and be within the investor protection framework.”

Fourth, Gensler is concerned about the systemic risks posed by stablecoins and wants the SEC — possibly with some help (in the form of new regulations) from the U.S. Congress — to regulate them (especially those that are not 100% backed by cash):

“I think the $125 billion of stablecoins we have right now are like the poker chips at a casino, and I think they create risks in the system… Yes, I think if this continues to grow – and it’s grown about 10-fold in the past year – it can present those system-wide risks…

“You can see where it could start to undermine things if it continues to grow…[how it could] undermine traditional banking systems if it’s not brought inside the remit of banking.”