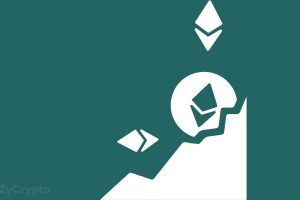 According to the September edition of Bloomberg Galaxy Crypto Indices (BGCI), there is a very high chance that Ethereum could soon become the top cryptocurrency, unseating Bitcoin. The report highlights that Ethereum is leading the DeFi revolution as well as playing a key role in making the dollar the “primary global currency” by being the rails facilitating the Tether (USDT) stablecoin which tracks the dollar.

Several key market players have long held this stance. A while back, deVere Group CEO, Nigel Green stated that Ethereum could perform the feat in as soon as 5 years. Green expects this to happen as he believes that compared to Bitcoin, Ether has more real-use potential.

More recently, Ethereum supporters have highlighted that Ethereum could attain this milestone faster than expected. As key players note, the growing interest from institutional investors in the second-largest cryptocurrency could facilitate the flippening more than anything else.

The widely shared sentiment amongst Ether observers is that while Bitcoin is viewed as a good competitor, institutions consider Ethereum to be a form of money that has its own digital economy.

Pointing to several institutions that have made significant entrance to the Ethereum market including Grayscale, Ark Invest, and Standard Chartered, proponents explain that this recognition means that Ethereum is now being talked up as having a higher potential of growth and offering a higher risk-reward ratio than Bitcoin.

It has also become a trend for some investors to be Ethereum first and in some cases, Ethereum only as Grayscale has come to find.

Bitcoin and Ether proponents continue to clash over community differences

Meanwhile, the tension between Bitcoin and Ethereum proponents continues to build up. Recent comments by Ethereum founder Vitalik Buterin have further escalated the rift. Per previous reports, Buterin lashed out at El Salvador’s adoption of Bitcoin as legal tender, describing it as a power grab move by President Nayib Bukele aimed at gaining favor with Bitcoin maximalists who are very easily pleased.

Buterin has stood by his analysis despite criticisms from the Bitcoin community. Notably, Bitcoin proponent Samson Mow, the CTO of Blockstream opined that Buterin was only angry that El Salvador picked Bitcoin over Ethereum. However, Buterin has stated that his analysis is unbiased as he has also criticized Ethereum in the past.

Nonetheless, Ethereum maximalists are still confident that Bitcoin’s dominance is over. Comments following Ethereum’s confirmation of ETH 2.0 related updates already declared Bitcoin dead. Another observer stated that Ethereum would surpass the market cap of Gold before Bitcoin does, naming the prospect to be the worst nightmare for Bitcoin maximalists.