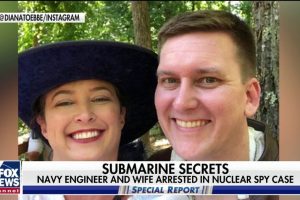 Jennifer Griffin has the latest on the Justice Department’s charges against Jonathan and Diana Toebbe on ‘Special Report.’

A neighbor of the couple accused of selling U.S. secrets said Jonathan and Diane Toebbe “didn’t talk to anybody” and called their arrest a “big shock” for the community.

Jonathan Toebbe, a Navy nuclear engineer with access to military secrets, and his wife, Diana Toebbe, were arrested in West Virginia Saturday on espionage-related charges.

Toebbe was charged with trying to pass information about the design of American nuclear-powered submarines to someone he thought was a representative of a foreign government but turned out to be an undercover FBI agent.

The couple is being charged with violating the Atomic Energy Act, which restricts the disclosure of information related to atomic weapons or nuclear materials.

Fox News spoke with Jennifer McCormick, a neighbor of the Toebbes, who said the couple kept to themselves.

“They didn’t talk to anybody, even on the block,” McCormick told Fox News. “We’ve lived here over 20 years. They moved here in 2014 and been up and down this block so many times, and we would see them and never even say hi, don’t even like, catch your eye.” 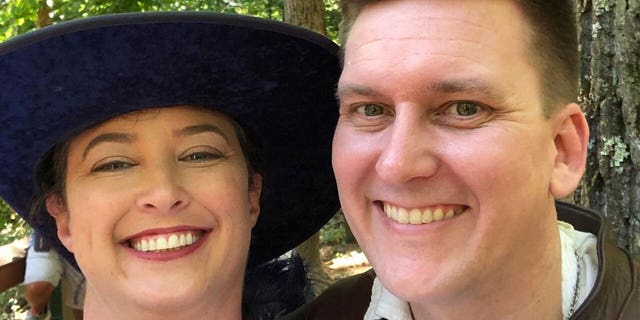 Diane  and Jonathan and Toebbe
(Instagram/@dianatoebbe)

McCormick added that “they just kept to themselves.”

“This is a very friendly, very open community. We do parties on holidays and everybody really knows each other and everybody keeps saying we just never knew them,” she said. “So they just kept to themselves.”

McCormick said she wouldn’t call them “unfriendly or friendly” but said “they just didn’t want anybody in their business.”

“I wouldn’t say they seemed unhappy, but it was just very stoic, you know, nothing, just no expression, no hi, no wave—that’s it,” she said. “It just, you know, they just would get in their car and go or if they were outside, put out the trash, they would just come in, and that’s it.”

She added: “To not even have a conversation is just very bizarre for this community.”

The FBI visited the neighborhood in West Virginia over the weekend. McCormick said it was “complete madness.”

“This whole block was crazy on Saturday,” she said.

But as the community reacts to the Toebbes’ arrest, McCormick said the general reaction is that most “feel sorry for the kids.”

“You know, they went to school here locally in our community, and everybody feels like, what’s going to happen to them?” she said. “I think that’s the other thing, other than just how horrific what they did or allegedly did was.”

McCormick added: “But everybody feels really bad for the kids. Big shock for sure.”

Federal prosecutors say the Toebbes should remain in custody pending their trials as they face a potential maximum penalty of life in prison and are at “serious risk” of fleeing.

An unsealed criminal complaint alleges that Jonathan Toebbe contacted an unidentified foreign nation in April 2020 to sell U.S. Navy submarine secrets. The FBI, however, obtained Toebbe’s documents and began communicating with him undercover in December.

The Toebbes hid data cards in items such as a peanut butter sandwich, a Band-Aid wrapper and a chewing gum package so the information could be picked up by who they believed was a foreign spy operative, authorities say.

Diana Toebbe is accused of “acting as a lookout” as her husband dropped off the material.

Prosecutors allege that Jonathan Toebbe also told his contact person that he might need to leave the country on short notice.

“Should that ever become necessary, I will be forever grateful for your help extracting me and my family,” the document quoted him as writing. “I surmise the first step would be unannounced travel to a safe third country with plans to meet your colleagues. We have passports and cash set aside for this purpose.”

The couple is scheduled for an initial court appearance Tuesday morning. Prosecutors are reportedly requesting a detention hearing later in the week.

Fox News reported on Monday – after reviewing what appears to be the Toebbes’ social media accounts – that Diana Toebbe had multiple Facebook and Twitter posts in support of Black Lives Matter, anti-Trump posts,and followed “resistance” accounts on Twitter.

Diana Toebbe is a teacher at the private Key School in Annapolis and has been indefinitely suspended from her job after the arrests.