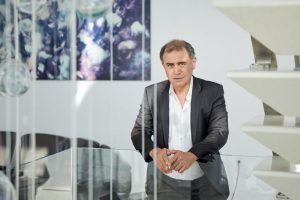 Presented with indisputable evidence, Roubini said in an e-mail exchange: “You got me.” Explaining why he has been so vocal against bitcoin, he said:

“Chiefly because I did not want people to think in any way it was me, and because bitcoin has to stand up to scrutiny to level up.”

Roubini said he saw the coming banking crash “as I famously predicted,” so he felt he had the responsibility to “save the world” because no one else believed the banking system was to collapse.

He then started searching online for any way to create hard money in a digital form that is outside the banking system.

“I’m an economist, I know money very well,” he said. “So I wanted to recreate in this new digital medium the most perfect money just in case banks go tits up.”

He found online about previous attempts at digital money and quickly realized he would be perceived as going against the establishment, so had to do it in “utmost secrecy” he said.

Roubini told Trustnodes he assembled a team of coders who were in the dark about the big picture, with each responsible for only compartments of the code.

To put it all together he then asked for some help from renown computer scientists, including Wei Dai.

So you’re not Satoshi, we asked, it’s these coders. “No, no, I am Satoshi” – he said. “I came up with the idea, I came up with everything, and I mined the early blocks.” To prove it, he signed an early block known to have been mined by Satoshi Nakamoto with his private key:

Roubini said he is already wealthy, so the early coins “are a gift to the world and to all the bitcoiners who believed in my project and have made it such a great success.”

“Once bitcoin gained a following,” he said, “I understood it could no longer be controlled and my leadership was unnecessary any further. To avoid taking any heat for anything that people across the world might do and might be blamed on me, I just left to focus on my professional career.”

How do you feel criticizing bitcoin in your professional hat while knowing you invented it, we asked.

“You know, many of the criticisms are true, and it’s not just me saying them, other people are saying them too. I just wanted to give bitcoiners a platform to respond.”

Do you see any return to bitcoining on the protocol side? – we asked. “No. Bitcoin now has very capable coders doing a great job, I have my own important work to do in economics.”

Asked why he did not intervene in the blocksize debate, he said he wasn’t sure. “Let the crowd sort it out.” Now however he says bitcoin has clearly won with even the tokenized BTC running on ethereum about to overtake BCH.

Asked whether he still believes in bitcoin; “Banking is fragile,” he said, “always was, always will be.”

“An anti-fragile monetary system outside of banking is a necessity for the global economic machine.”

We pondered whether to publish this piece, but someone like Roubini does not necessarily take away from Satoshi Nakamoto. The two, the myth and the man, can co-exist. However, it is good to know that even the chiefest critic is actually a bitcoiner.