Home » Politics » Time to go clothes shopping. How I lost 35 pounds during the COVID pandemic.

Time to go clothes shopping. How I lost 35 pounds during the COVID pandemic. 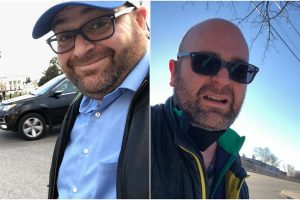 None of my work clothes fit anymore.

It’s a good problem to have, and one I’ll start doing something about once I’m fully vaccinated and return to an actual office.

In the meantime, I’m rejoicing in how I’ve shed 35 pounds during the COVID pandemic when it could have been so easy to go the other way.

The story of how my health took such a dramatic turn for the better dovetails with another healthy change in my life.

Just before the pandemic gripped the nation, Insider hired me away from Politico to lead its new Washington DC bureau. Opportunities like that are rare in journalism, and it was appealing to build something from scratch while incorporating all the different things I’d learned in all my previous newsrooms.

I’d also be able to step away from the break-neck pace I’d been keeping as a reporter on the Trump legal beat. My new job entailed recruiting, then editing a team tasked with doing exclusive, enterprising political journalism.

My pitch to recruits was decidedly optimistic. They could join the newest division of a growing, thriving news organization at a moment when so many others were shrinking — or even shutting down.

But little did I know that my big professional move would portend major personal changes, too.

After leaving Politico in late February 2020, I had planned to visit my mom in South Florida for the first time in more than a year, taking advantage of several weeks of free time in-between jobs.

But the nationwide travel lockdown pretty much coincided with my first days on sabbatical, limiting my travel options to the streets around my DC neighborhood. My wife and I did puzzles and adopted a feral cat. We baked.

It admittedly felt wonderful to not be part of feeding the 24/7 news cycle as the pandemic engulfed the world. I’d been pumping out articles at a relentless pace, and really, pretty much since arriving in Washington about 20 years earlier, during the final days of the lame-duck Clinton administration. Still, that feeling didn’t last long. The news was relentless. I ultimately decided to begin work at Insider earlier than my planned start time in mid-May.

Our first story for the DC bureau published in early April about the crazy black market that had taken off around the country as local, state, and federal government officials frantically searched for wholesale purchases of N95 masks and other personal protection equipment.

Then came a dramatic detour.

My wife and I were playing catch on a beautiful Saturday afternoon just a few days after my 45th birthday. I was pretending to be the shortstop for the Chicago Cubs.

I woke up limping on Sunday morning. By Monday, just as I was starting my second week at Insider, I came down with a fever and a seismic pain radiating around my inner thigh and leg.

My imagination started running wild about what was going on, and for good reason. Since childhood, I’ve been legendary for sickness and injuries. I lost my two top childhood front teeth flying into a couch in my Superman Halloween costume. A year later, I yanked out my bottom two teeth pulling on a balloon string at my brother’s Bar Mitzvah. Family vacations were regularly interrupted by visits to doctors for sore throats and ear infections. I had mono three times in high school. I’ve broken my arms six different times. I had a tonsillectomy not long after my honeymoon. I’ve gotten swimmer’s ear in my stomach.

So I did as told when my doctor instructed me to get to a hospital. I was an absolute whimpering wreck as my wife handed me off to emergency room nurses dressed in full hazmat gear.

I waited for the results of my first COVID test writhing in pain. I did my best to distract myself by watching a years-old college football game inside a hermetically sealed room. I later learned I was inside one of the most active hospitals for the novel coronavirus in all of the DC region.

Thankfully, I didn’t have COVID. It wasn’t anything to do with my baseball exploits, either. I had diverticulitis.

My doctors explained that my bad diet had finally caught up to me and given me this intestinal infection that’s common for people in their 40s.

I should have seen this coming. I stress-ate amid writing a never-ending stream of stories about Trump and the Mueller investigation. The free all-you-can eat snackbar at Politico endlessly tempted me, especially the peanut M&Ms. I couldn’t resist my favorite chicken finger food truck.

I had ballooned to almost 250 pounds. That’s dangerous stuff for a middle-aged man with a family history of diabetes, heart disease, and all the other stuff so common in America today.

Two nights in a hospital during the early days of the pandemic served as a reality check. So did the next two weeks recovering at home desperate to find a comfortable way to sit and sleep. We celebrated when I could graduate from clear liquids to carrot soup and scrambled eggs.

Diverticulitis comes with some pretty strict rules on what foods you’re supposed to avoid.

My new nutritionist told me to cut out lots of foods I liked: almonds, strawberries, everything bagels, and anything else the digestive system doesn’t easily break down.

And she implored me to do even more to get healthy — before it was too late. I needed to eliminate even foods I loved: ice cream, cookies, French fries, and fried chicken fingers. I also needed to dramatically limit bread and starches. All those sugar and carbs going in were like igniting dynamite inside my body. Ignoring her advice could lead to grave consequences.

Some changes took time, but were simple enough, such as eating just one starch per meal. I also gradually started measuring serving sizes. I watched my fat intake.

Curiously, my taste buds changed. By summer, I stopped craving chocolate and soon discovered just how amazing fresh fruit can be when you’re not always consuming artificial sweeteners. My breakfasts shifted from eggs, bacon, and a toasted bagel with cream cheese to non-fat yogurt — one of the most versatile foods on planet Earth — blended with frozen fruit. I have pickles instead of potato chips during lunch and keep away from the garlic bread for dinner if we are already having pasta. I eat two apples with peanut butter every afternoon. Wine and spirits, without added syrup, are fine in moderation. Frozen fruit doubles as an amazing ice cream substitute.

I also added a far more rigorous exercise routine. I started walking every day. Then I added short bursts of jogging. I couldn’t go far at first, just between a couple of mailboxes. Eventually, I could make it several blocks without stopping. I’m now doing about two-to-four miles a day, five times a week.

The 35 pounds came off at a pretty steady pace for much of 2020 and only recently began to stabilize. My goal is to still try to lose another 20 or 30. We’ll see how that goes. But I feel great. My bloodwork is amazing. My doctor joked during my last physical exam that I looked hot.

Stay away from the chicken fingers

Whether you’ve packed on the dreaded COVID 15, or have been struggling with your weight for years, know there’s hope for making a lasting change — and with luck, it won’t require a health scare.

My own personal health transformation has gotten a major boost because I’ve been lucky enough to work from home at a news organization that’s prioritized its employees’ pandemic-era well-being.

As I lead Insider’s Washington Bureau from my home office, my wife and I have significantly changed how we shop, cook, and exercise. You can’t eat cookies if there aren’t any cookies in the cupboard. No commute means there’s time to prepare healthy meals. Insider also encourages its reporters to get away from their computers, take breaks, and take time off. Maintaining your sanity is so much easier after getting fresh air — or some extended time to not think about work.

Now I’m steadying myself and my newfound willpower for what comes next once I get my COVID shots.

I’m looking forward to that first visit to my mom in South Florida — and, of course, my favorite hometown restaurants. Our DC bureau will finally open its doors sometime soon, too — we’ve been a virtual bureau since we sprung into existence almost a year ago. The idea of working in physical proximity to colleagues makes me a drop giddy. Some of us have never even met in person.

I just need to brace myself for the home-baked cookies and the chicken finger food truck. I want to be able to keep wearing those new work clothes I’ll soon be buying.