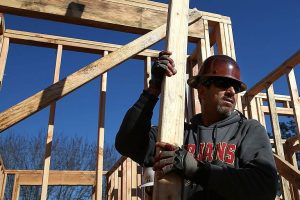 Last summer was slow for Robert Jackson’s general contracting business in Atlanta, Georgia — so slow, in fact, that he was eligible for unemployment.

Then around September, he said, “someone turned a switch.”

That month he signed contracts that included $50,000 worth of custom cabinetry, he told Insider, and quickly filled up his five-man crew’s calendar with renovation jobs all the way out to July. If he could find enough trusted labor, he said, he had enough work to run three crews.

Nationally, renovation projects were facing an average backlog of 7.4 weeks in the first quarter of 2021, up two weeks from the same period last year, found data from the home-renovation platform Houzz.

Atlanta has been one of the hottest growth areas in the country over the past decade, and the pandemic has pushed that into overdrive with new arrivals from New York and California, attracted to the warm weather and relative affordability, driving residential prices ever higher.

Jackson’s 34-year-old company is benefiting from this surge in demand, even as the prices and availability of raw materials and appliances continue their unpredictable gyrations. While he declined to publish specific numbers, he said that even with the three-month interruption, 2020 revenues exceeded those from 2019.

When folks are stuck at home, they’ll pay to make it look nice

In the early days of the pandemic, some of Jackson’s repeat clients were keen to move forward with jobs that didn’t require having work crews inside the house, and he quickly started to improve decks, pergolas, and other outdoor gathering spaces.

As the first few weeks and months of working and learning from home passed, more and more people got tired of looking at their outdated kitchens and broken bathrooms. With kitchens especially, they were willing to pay handsomely to make them look perfect.

“People like spending there. That’s the peacock,” Jackson said.

In addition to his popularity among native Atlantans — “We blew up on Nextdoor” — arrivals from the coasts came ready to invest in their new homes.

“No price surprises them,” Jackson said, referring to a Bay Area couple who dropped well over $500,000 on a historic bungalow, and who were making additional six-figure improvements before settling in.

Building-material prices are in ‘bizarro world,’ making it tricky to provide customers with accurate estimates

In normal times, Jackson was able to provide clients with an estimate for a job with a high degree of accuracy — but the last few months have been anything but normal.

Lumber prices have more than tripled, with basic 2-by-4s going for more than $1 per foot, and pressure-treated wood for exterior use at $2 per foot — if you can even find it in stock.

“All decking materials’ prices are in bizarro world,” Jackson said.

Similarly outlandish increases have made a sheet of certain types of plywood cost the same as a small stack used to. For indoor jobs, appliances are either out of stock or back-ordered to the extent that Jackson isn’t able to confidently say when a job will be finished.

All this volatility means Jackson is now, for the first time, providing adjustable estimates to ensure that he’s not on the hook in the event this squeeze continues.

“I’ve never seen anything like this in 40 years of this business,” he said.

High demand means more freedom to be selective about jobs

The high demand allows Jackson to pick and choose what he likes to work on most — in his case, kitchens — and pass on the outdoor jobs, since even higher demand and shortages of treated lumber are creating the worst supply challenges right now.

“If you wanted a deck done in the spring, you should have gotten started in November,” he said.

What Jackson likes best about kitchens is the opportunity to create custom cabinetry with the two craftsmen in his in-house workshop.

“That’s my playground,” he said. “Even if it was a Saturday after a long week, that’s where I’d want to be.”

Financially, the picture is better, too, since prices of raw materials for cabinetry have remained stable so far. And since the woodworking is done in-house, the jobs generate a better profit margin than those he has to subcontract to other specialists.

As the world gradually reopens, there doesn’t seem to be an end in sight, especially as economists anticipate a robust expansion this year.

“I thought the uptick would have slowed by now, but it hasn’t,” Jackson said.