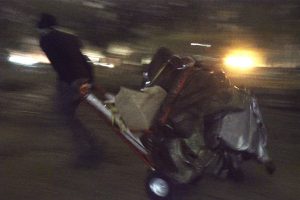 The platform where the Jefferson Davis Chair sat at Confederate Memorial Circle in Live Oak Cemetery in Selma, Ala., on Monday April 5, 2021. (Photo: Mickey Welsh / Advertiser)

MONTGOMERY, Ala. – An “anti racist action group” is claiming responsibility and holding for ransom a stone chair, dedicated to Jefferson Davis, stolen from a cemetery in Selma, Alabama, last month.

According to an email from the group, “White Lies Matter,” the chair was taken from the cemetery about a month ago. Selma police Chief Kenta Fulford confirmed his department received a report of the chair being stolen.

Instead of cash, however, the group has asked the United Daughters of the Confederacy to hang a banner outside their headquarters in Virginia for 24 hours, beginning April 9, with a quote from Assata Shakur. April 9 is the 156th anniversary of Robert E. Lee’s surrender in Appomattox, Virginia.

“The rulers of this country have always considered their property more important than our lives,” says the banner that the group mailed to the UDC.

A flyer, purportedly sent to the United Daughters of the Confederacy, demands the organization fly a banner outside their Virginia headquarters or the stone chair dedicated to Jefferson Davis would be defaced. (Photo: Contributed)

Shakur was a former member of the Black Liberation Army, convicted of murder in 1977, escaped prison in 1979 and remains free despite being wanted by the FBI after she was granted political asylum in Cuba.

In the notice the group sent Monday, they wrote about the tension between “our heritage of white supremacy and our underlying belief in ‘liberty and justice for all.'”

“America’s original sin is that people were kidnapped from their homes and forced to build one of the most prosperous nations in the world, without being allowed to participate in it,” the letter says. “…We decided, in the spirit of such ignominious traditions, to kidnap a chair instead. Jefferson Davis doesn’t need it anymore. He’s long dead. To be honest, he never even had the chance to sit in it in the first place.”

A plaque giving the history of the stone chair, dedicated to Jefferson Davis, in Live Oak Cemetery in Selma, Alabama. (Photo: Contributed)

The chair was first noticed missing on March 19, the weekend of the Selma Pilgrimage, according to social media posts. There is a $5,000 reward leading to information about the disappearance of the chair, described as being about 3-feet-tall and weighing several hundred pounds.

The Ladies of Selma presented the stone chair in memory of Jefferson Davis in 1893, over 20 years after he’d last visited the city. Before being stolen, the chair was displayed in Confederate Circle which covers about an acre in Selma’s Old Live Oak Cemetery.

Weathered by time, the monument used to show details of ferns, tree trunks and branches. An inscription read “Here We Rest” on the chair’s back and a dedication to Davis used to be visible on the seat.