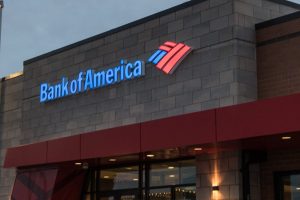 Bank of America on Tuesday announced it was raising the minimum hourly wage for its employees to $25 by 2025.

The Charlotte-based banking giant is the latest U.S. corporation to increase the minimum hourly wage paid to its workers as the country continues to rebound from the COVID-19 pandemic that caused massive layoffs last year.

The move also comes as the Biden administration is pushing for a national $15 an hour minimum wage, and it follows announcements from McDonald’s, Walmart, Starbucks, and Amazon that they, too, will increase hourly worker pay.

Meanwhile, governors in at least 10 states have said they will no longer accept the federal government’s enhanced unemployment program that includes $300 in additional dollars for weekly benefits. Many of those state’s Republican leaders contend the extra  federal cash has incentivized low-wage workers to make more money to not work as  some employers say they are having difficulty finding labor.

A branch of Bank of America (Photo: Tony Webster, Special to the Desert Sun)

COVID relief: Why are so many states ending enhanced unemployment?

Bank of America in March 2020 raised its U.S. minimum wage to $20 per hour, and the company said it will now require all of its U.S. vendors to pay their employees whose work is dedicated to the bank at least $15 an hour.

Sheri Bronstein, Bank of America’s chief human resources officer, said the company wants to provide “strong pay and competitive benefits” to help the families of their employees and to attract and retain the best talent.

“A core tenet of responsible growth is our commitment to being a great place to work, which means investing in the people who serve our clients,” Bronstein said.

The bank in April posted a first-quarter profit of $8.1 billion, which far exceeded Wall Street estimates.

However, Bank of America, like many banks across the U.S. has cut its operating hours for customers, with some branches closing at 4 p.m. during weekdays.

The bank has approximately 66 million consumer and small business clients with 4,300 retail financial centers across the country.

Bank of America’s current minimum wage is nearly three times higher than the federal minimum wage of $7.25 an hour, but President Joe Biden is trying to get Congress to  gradually increase it to $15 an hour.

A government report in February by the nonpartisan Congressional Budget Office concluded that boosting the minimum wage to $15 per hour would raise income for millions of Americans and lift 900,000 people out of poverty.

But by 2025, when the federal hourly rate would hit $15 under a proposal before Congress, some 1.4 million fewer Americans would be working, the report concludes.

That is because higher wages would increase the cost of producing goods and services and, in response, many employers would reduce their workforce or hire fewer employees, the report said.

Have a tip on business or investigative stories? Reach the reporter at [email protected] or 602-509-3613 or on Twitter @CraigHarrisUSAT