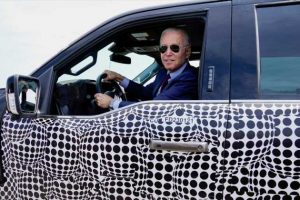 In a visit to Ford Motor Co.’s electric vehicle plant in Dearborn, Michigan, President Joe Biden pushed the future of electric vehicles ahead of the car company releasing their all-electric F-150 Lightning pickup truck on Wednesday.

The new cars were behind Biden as he spoke about electric vehicles as the “future of the auto industry.”

Following his speech, he not only got a first look at the new pickup truck but made an unscheduled stop as he was allowed to test drive one around a nearby track. The president seemed to have the need for speed, as he drove up to a pool of reporters and told them, “this sucker’s quick.”

People on social media noticed how fast Biden was going, with some finding it humorous that other people were trying to catch up. Meanwhile, other Twitter users thought he should maybe take it easy.

Biden says the Ford is seriously fast. Then to prove it he asks press to get out the way and floors the accelerator for another burst around the Dearborn testing site pic.twitter.com/dU1sX1JQBA

My favorite part is secret service trying to keep up. Love it.

😂 he better slow down before he make Harris president

You gotta think the Ford PR and Marketing team is poppin’ a few bottles tonight. https://t.co/J2pZlUZaBu

Actual footage of Joe testing out the suspension in monster mode .. pic.twitter.com/bkGxQ1A5G6

Biden drives off into the sunset in an electric truck https://t.co/24RV7FBJCR