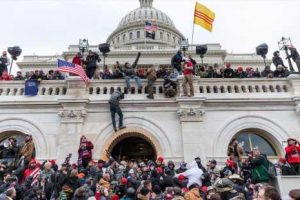 New York (CNN)American gun manufacturers saw their stock prices surge Wednesday afternoon as a group of Trump supporters stormed into the US Capitol building in an attempt to overturn the results of the 2020 presidential election.

Vista’s surge continued Thursday and was up around 2% at midday amid a broader market rally. Smith & Wesson and Ruger shares fell sharply Thursday, though both firearms makers are up more than 15% so far this year. The companies have not responded to requests for comment.
A spokesman for the firearms industry condemned Wednesday’s violence.

“What is occurring today on Capitol Hill is a travesty,” National Shooting Sports Federation director of public affairs Mark Oliva told CNN Business Wednesday evening. “The industry has nothing to do with, and has no part in any of that.” 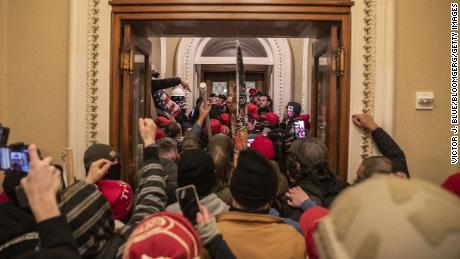 Oliva, a US Marine veteran who used to work on Capitol Hill, said that the rioters who brought guns into the Capitol building broke federal law.
“The mayor of DC earlier this week had told people that if they’re going to come to DC, to not bring a gun,” Oliva continued. “If you are storming the walls of Capitol Hill and you are going into the Capitol, you are committing a federal offense.”
Last year was the strongest on record for gun sales in America. An estimated 21 million guns were sold in 2020, Oliva said, a a nearly 60% increase from the number sold in 2019.
The surge in 2020 gun sales was fueled by a 40% year-over-year increase in first-time gun buyers, Oliva added, particularly by women and Black Americans. Those sales, he says, came largely from parts of the country where civil unrest spiked during protests over racial inequality and police brutality.
“8.4 million people bought a gun in 2020 for the very first time,” Oliva said. “Our customer base is certainly growing well beyond expectations.”

Gun sales typically spike in the lead-up to national elections, especially when Democrats advocating for stricter gun legislation are favored to win. The previous record of 15.7 million guns sold in a calendar year was set in 2016, when many gun aficionados feared former Secretary of State Hillary Clinton would win the White House. Oliva said the firearms industry doesn’t expect sales to slow down anytime soon with President-elect Joe Biden set to take office on January 20.
“People are still concerned about being able to buy the firearms they want given the incoming Biden-Harris presidency and their previous statements on gun control,” he added.
Source: Read Full Article