Home » Business » Champagne makers are throwing out grapes. Here's why 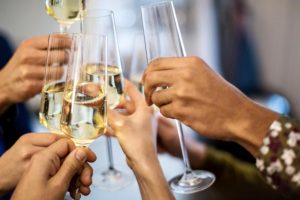 London (CNN Business)Champagne houses are celebrating after sales and exports set new records last year even as pandemic lockdowns forced many bars and restaurants to close.

Comité Champagne, a trade association representing more than 16,000 winegrowers and 320 Champagne houses, said Wednesday that France exported a record 180 million bottles of bubbly in 2021, an increase of 38% over the previous year.
Global sales of champagne also hit a record €5.5 billion ($6.2 billion).

Comité Champagne said that total shipments rose 32% over the previous year to 322 million bottles as people found reasons to celebrate at home.

“With tourism and the staging of events still reduced due to the health crisis, there is room to believe that home consumption has taken up the slack,” the trade group said in a statement.

“Consumers have chosen to entertain themselves at home, compensating for the generally gloomy mood with new moments of conviviality and sharing,” it added.
Detailed export data has not yet been released, but in 2020, the United Kingdom and the United States were the top foreign markets for champagne.
Champagne drinking popped back up to its pre-pandemic levels last year in France, with shipments increasing 25% to reach nearly 142 million bottles.
Maxime Toubart, co-president of Comité Champagne, said the rebound was a “welcome surprise” after a difficult 2020.

The name Champagne is exclusively reserved for wines harvested and produced by 16,200 growers on 34,300 hectares northeast of Paris.
The region was hit by severe frosts last spring, which damaged crops across France’s wine growing regions. The frost affected about 80% of vineyards in those areas, according to the European Committee of Wine Companies.
Source: Read Full Article