Home » Business » China slams U.S. democracy as a 'game of the rich,' at an event promoting Xi's growing power

China slams U.S. democracy as a 'game of the rich,' at an event promoting Xi's growing power 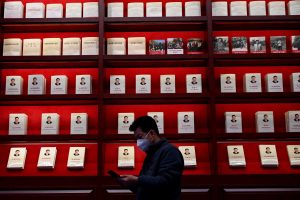 BEIJING — A top Chinese official issued a rare criticism of the U.S. and Western democracy during a high-profile political press conference Friday.

The night before, Chinese President Xi Jinping joined the ranks of Mao Zedong and Deng Xiaoping and became the country's third leader to oversee the adoption of a "historical resolution" at the close of a widely-watched meeting of the Chinese Communist Party, the sixth plenum of the party's Central Committee.

Mao led China for decades after the founding of the Chinese Communist Party a century ago. Deng spearheaded sweeping economic reforms four decades ago that reduced the state's role in the economy and allowed foreign businesses into China.

Chinese officials at Friday's press conference emphasized how the country would now follow Xi and his vision for a strong CCP-dominated system.

And for more than five minutes, Jiang Jinqua, director of the policy research office of the party's central committee, criticized the U.S. and Western countries for trying to impose their idea of democracy on China.

"Democracy is not an exclusive patent of Western countries and even less should it be defined or dictated by Western countries," Jiang said in Mandarin, according to an official translation.

"The electoral democracy of Western countries are actually democracy ruled by the capital, and they are a game of the rich, not real democracy," he said.

While China's foreign diplomats and propaganda arms have made similar criticisms in the past, Jiang's remarks stood out due to the high-profile political context of the press event, and their specific mention of the U.S.

The U.S. plan to hold a "Summit for Democracy" in December is "an attempt to revitalize Western democracy," Jiang said. "To convene such a summit against [a] backdrop of loads of problems in Western democracy, … the intention is nothing but bashing other countries and dividing the world."

He also pointed to public opinion polls showing widespread worries in the U.S. about American democracy, compared with overwhelming Chinese confidence in their own government.

A Pew Research study released Nov. 1 found that 72% of Americans say U.S. democracy used to be a good example for others to follow, but has not been recently. A study led by York University professor Cary Wu found local satisfaction with how the Chinese government handled the coronavirus pandemic.

"The Chinese constantly attack democracies as being not truly representative of the people but rather a cover for elites to keep control," said Scott Kennedy is senior advisor and Trustee Chair in Chinese Business and Economics at the Center for Strategic and International Studies.

"Certainly there are a lot of Americans disenchanted with our political system," Kennedy said, without referring to a specific poll. "The irony is that Americans are free to criticize their government. In China, expressing such an opinion could make you a dissident and get you locked up."

While criticizing Western political systems, Chinese officials on Friday promoted their country's own agenda and emphasized new models under Xi.

"Xi is using the past to serve the present and claim the future, by constructing a historical narrative that justifies his personal leadership and policy preferences as he looks to secure a norm-defying third term as leader at the 20th Party Congress next fall," Neil Thomas, analyst for China and Northeast Asia at Eurasia Group, wrote in a note.

Since Xi rose to the top of central government power in 2012, he has promoted his own state-centric political ideology, commonly known as "Xi Thought."

The official report on this week's "historical resolution" cemented Xi's political leadership by calling him the "principal founder of Xi Jinping Thought on Socialism with Chinese Characteristics for a New Era."

Economic development has been "front and center" for the CCP, said Han Wenxiu, executive vice minister at the finance and economic affairs office of the party's central committee. He referred to a meeting held in 1978, just as Deng was beginning to allow foreign businesses into China.

"As socialism with Chinese characteristics enters a new era, development has been given new meanings," Han said.

"We should cast aside the old development path," he said, noting that high-quality development is now more important — like recognizing that "green and lush mountains are invaluable assets." Han maintained that Beijing would still like to "open up" and remain part of the global economy.

Many foreign investors and businesses have been caught off-guard this year by Beijing's crackdown on internet technology companies, after-school tutoring businesses and real estate developers.

Tech giants have subsequently tried to show they are in line with Beijing's effort to pursue "common prosperity," and focus on moderate wealth for all, rather than for just a few. That means addressing social problems such as high living costs and an impending labor shortage from a rapidly aging population.

Xi's view is that "ideological challenges are threats to national security," the Economist Intelligence Unit said in a statement. That will "indicate more assertive efforts to shape 'ideological education' across the country, in ways that may adopt an anti-Western tone. Economic reform, however, was barely mentioned, suggesting that the current tilt toward [regulatory] intervention will continue."

Chinese officials on Friday did not directly respond to questions on how policy goals might be affected by slowing economic growth.

Han from the economic affairs office said "entrepreneurs have multiple ways and means to contribute to common prosperity, the most basic of which is to operate lawfully and honestly." Han said stealing from the rich to help the poor in a "Robinhood" approach of forcing donations "would run counter to the original notion of common prosperity."