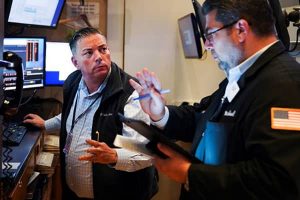 CNBC's Jim Cramer said Tuesday it's OK for investors to have difficulties wrapping their heads around the stock market right now.

"Every day someone tries to make sense of the broader strokes — the big moves, the stagflation calls, the Fed-has-to-move calls — but it's almost impossible," the "Mad Money" host said, shortly after the three major U.S. equity indexes finished in the red for the third straight day.

"How can Alphabet drop 49 points when it was pushed hard by a major brokerage?" Cramer said, referring to JPMorgan's decision to reiterate its overweight rating on Google's parent company. "Why did the retailers rally if the economy's supposed to be weakening? These are random, themeless moves … that make you feel like a dope the moment you get involved."

However, Cramer stressed to viewers his belief that Wall Street is in the process of finding a bottom following weeks of challenged trading. In the past month, the S&P 500 is down 2.42%, while the tech-heavy Nasdaq has declined 4.3%. The blue-chip Dow Jones Industrial Average is the relative outperformer, but it's still down 0.66% over the same stretch.

"So what do you do? You wait," Cramer said. "You wait until we get closer to the end of the month, when historically the market tends to bottom, then you get ready to buy stocks gradually on the way down."

Cramer acknowledged that it's "tough to tell people to relax," particularly at a time when investors are nervous about supply chain challenges, inflation and the strength of the labor market. All three of those negatives are relatively new challenges to make sense of from an investing standpoint, he said.

"You just need to know you're not alone. In fact, judging by the ugly hedge fund numbers that I've seen recently, anyone having trouble with this market is actually in the majority. So don't feel bad if the market makes you feel baffled. It's incredibly confusing out there."

Sign up here for the new CNBC Investing Club newsletter to follow Jim Cramer's every move in the market, delivered directly in your inbox.