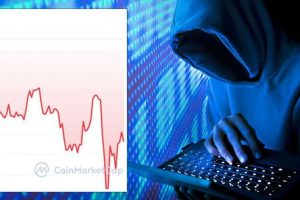 Bitcoin (BTC) is currently fighting to regain ground following a shock flash crash earlier this month. The token caved by nearly $10,000 from $56,951 to $47,103 on December 3 and is still on unsettled ground at $46,971 today. The recent upset is just one of many BTC has experienced in its lifetime, but as investors attempt to claw back some of their capital, they could end up falling foul of scammers.

Candid Wüest, VP of Cyber Protection Research at software firm Acronis, said that as their value increases, so could the frequency of attacks from fraudsters.

He said high prices attract “threat actors” who want to “follow the profit”.

And they have a selection of tools available to them.

Mr Wüest said: “End-users have struggled with phishing attacks, infostealer and malware that swaps wallet addresses in memory for quite a while.”

“Besides these attacks, we expect to see more of them against smart contracts directly, attacking the programmes at the heart of cryptocurrencies.

“We also expect attacks against Web 3.0 apps to be happening more frequently in 2022.”

Mr Wüest concluded that new markets would open up opportunities for “sophisticated attacks”.

These could see scammers “drain millions of dollars from cryptocurrency liquidity pools”.

Bitcoin investors may not have to worry about scammers as much in the future, as experts aren’t expecting much from the currency.

One academic has recently warned the token may not “last much longer” in the current climate.

Speaking to CNBC, Eswar Prasad, a senior professor of international trade policy at Cornell University, said Bitcoin is currently at the mercy of its buyers.

He said it is currently not serving its purpose as a “medium of exchange”.

And, ultimately, he said he didn’t think it would develop “fundamental value” outside “whatever investor’s faith leads it to have”.

Other experts believe the market as a whole is fluttering, not just BTC.

Speaking to the Independent, Will Harborne, the CEO of DeversiFi, a cryptocurrency exchange, said the market is in a “bubble”.

He warned the market could continue to fluctuate, but momentum is building.

In the “near future”, investors could see “another market correction”, he said.

There is also some “really positive momentum” in the market.

But, Mr Harborne conceded, people who try to “predict the market” end up getting it wrong.