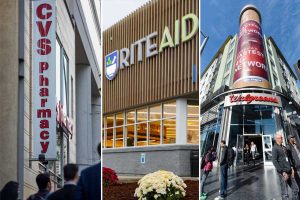 Shares of CVS Health, Walgreens Boots Alliance and Rite Aid are falling Wednesday on a report that Amazon may open brick-and-mortar pharmacies.

Amazon is considering whether to push further into selling prescriptions by opening standalone retail pharmacies or adding pharmacies to Whole Foods stores, according to a report by Business Insider that cited three anonymous people familiar with the matter.

According to the report, discussions are in exploratory stages and if Amazon moves forward with the idea, it could take more than a year for the company to start opening stores.

An Amazon spokesperson said the company doesn't comment on rumor or speculation.

"Amazon Pharmacy is focused on making at-home delivery pharmacy easier and more convenient for customers," the spokesperson said in a statement.

The company has shown interest in expanding into health care over the past several years. It acquired online pharmacy PillPack in 2018. Last year, it officially entered the business with Amazon Pharmacy, another move that sent stocks of drugstore chains tumbling. With that new service, customers in most states can get prescriptions covered by most insurance companies and get medications delivered to their door.

CVS, Walgreens and Rite Aid have already been squeezed by Amazon, as more consumers buy front-of-store items like shampoo and toilet paper online. That disruption has caused drugstore chains to look for other ways to drive foot traffic and boost sales. CVS is adding more health-care services to its stores, from primary care visits to sleep apnea screenings. Walgreens has focused on speedy and convenient services, such as curbside pickup and home delivery. And Rite Aid has refreshed its stores with new signage and a different mix of products on shelves.